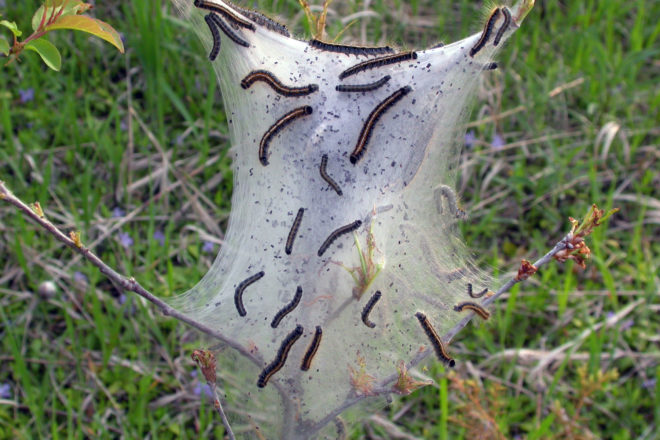 In the spring, tent caterpillars form these tightly woven webs around the trunks of wild cherry trees. Photo by Roy Lukes.

Some springs, like this year’s, had many small trees and shrubs partly covered with the dense webs of tent caterpillars, but recently I noticed different types of webs on some much larger trees along country roads.

My good friend Dick Smythe, an insect expert, informed me that there are two different creatures constructing and living in these tight webs on our landscape. They are both the larvae of moths and have similar life cycles, but they have different hosts at different times of the year.

The tent caterpillars are in the genus Malacosoma, in the Lasiocampidae family, and they are the larvae of a two-toned brown moth. There are 26 known species of tent caterpillars, and six are residents of North America.

They form large, tightly constructed, weblike tents on species of wild cherry trees, where the female lays up to 250 eggs on one tree in a single mass, usually on the sunny south or southeast side of the plant.

Because they develop in the spring – when our weather can sometimes be quite cool, especially at night – these tents help to insulate them. The caterpillars are very social and work to help each other find food – mainly the new, emerging cherry leaves – but they also stay together to keep warm. The tents can provide shade during extremely warm weather as well.

The tent caterpillar is not eaten by many birds except the black-billed and yellow-billed cuckoos. The caterpillar is so spiny that it is protected from predators, but the cuckoos ingest them and then later cough up the stomach lining, like an owl pellet, in which the spines are embedded.

Tent caterpillars spend the winter in the egg as a first-stage pharate caterpillar – a sort of intermediate phase between instars – and the egg actually contains antifreeze chemicals to protect the caterpillar until it emerges in the spring. They are found in much of the eastern United States and southeast Canada.

Northern Wisconsin has had infestations of the forest tent caterpillar – in the same genus but a different species – at about 10-year intervals. It defoliates aspens and some maples but does not construct the dense webs. I remember driving up to Manitowish Waters years ago and saw that much of the northern hardwoods were so defoliated that the normally dark forest had numerous sunny sections.

The fall webworm is known by the moth’s scientific name, Hyphantria cunea, and it is in the Erebidae family. The male moth is pure white in the northern parts of its range, but it can have varying amounts of gray or black spotting on its body in other regions. These moths are native to North America but have accidentally been introduced into much of Europe and parts of Asia.

These moths lay iridescent masses of green eggs on the undersides of tree leaves in the spring that can have 400 to 1,000 eggs in one cluster. The small caterpillars hatch, grow and form webs on the outer branches of trees in late summer, but these webs are not as noticeable as those constructed by the spring tent caterpillars. The color is more subdued and blends in with the tree branches.

Heat conservation and protection are also the reasons for the fall webworm’s abodes because they are the prey of some birds and numerous insects such as spiders, flies and wasps.

Moths of the webworms and tent caterpillars are generally about one and a half inches long. Some summers go by with few webworms forming. The moths, like most in that group, are active and out flying at night.

A very good book to have in your collection is Moths and Caterpillars of the North Woods by Jim Sogaard, published by Kollath+Stensaas Publishing. It has great color photographs of moths and caterpillars and includes their size and the time of year when they can be seen.

Become more observant of the life around you, no matter how small it may be. Discovering a species that’s new to you can be an exciting and rewarding learning experience.