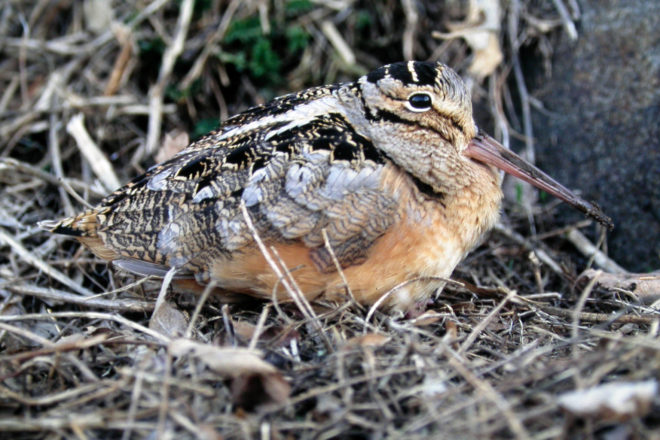 A long bill and perfect camouflage are hallmarks of the American woodcock. Photo by Roy Lukes.

This is the time of year to look for that special place where a male woodcock performs his spring mating ritual. Find a field or a large opening near a wooded area; wait until 22 minutes after sunset on a warm, clear, calm evening; then listen for the “peenting” sound of the male on the ground. His short legs require clear ground or flat, mossy areas.

He makes a nasal-like call about three seconds apart, then suddenly flies up higher and higher in a circular pattern, making short, musical notes. When he reaches the zenith, he begins slip-sliding back down to the spot where he began and returns to emitting his nasal “peent” sound. People with good hearing can pick up this call from as far away as several hundred yards, depending on the direction of the wind.

The male does this over and over until it’s almost dark. If the sky is overcast or partly cloudy, he begins 15 minutes after sunset. It’s his way of attracting a mate – behavior that can continue even after she’s incubating eggs.

We’ve watched this spectacular show well into the month of May. On clear nights with a full moon, the male woodcock may continue his display for most of the evening.

When my late husband, Roy, and I were first married, we did an annual survey that began well north of Sister Bay and had us driving south on Old Stage Road, stopping every half mile to listen for woodcocks doing their display. The first year I did this was 1973. It was a fun way to learn the sounds that this small shorebird makes. As the years went by and the area became more developed, vehicle traffic and barking dogs made it more difficult to run the route.

American woodcocks are grouped with the long-billed probing sandpipers such as the common snipe, dowitcher and stilt sandpiper. All range in size from 8½ to 11½ inches. The only two that breed in Wisconsin are the woodcock and snipe.

Woodcocks are never true shorebirds. Their preferred habitat is woodlands, with some open, damp areas where they can push their bill into muddy soil to catch earthworms. The tip of the bill is even flexible, which gives them the advantage of more movement in the ground to feel and grab their prey. This bird is known to eat more than its weight in earthworms daily.

What amazingly effective camouflage the woodcocks have, appearing much like the color patterns of the twigs and dead leaves on the ground. Their upper body parts are various shades of brown, sprinkled with black and gray, and their underparts are a rusty color. Three wide, dark bands separated by narrow, tan bands adorn the top of their head from eye to eye.

And what beautiful, large, dark eyes they have – somewhat like old-fashioned shoe buttons. Compare the eyes of this shorebird to others in this large group, and you’ll see that the woodcock’s eyes are unusually big for its size. Its eyes are set far back and high in its head, perfectly placed for a bird that spends a lot of time with much of its 2½-inch, earth-brown bill in the ground while feeding.

Woodcocks that are returning now wintered somewhere in the southern states, from Florida to Texas, with perhaps the most birds living in Louisiana. They head north in early February, taking as long as four to six weeks to arrive at their breeding areas here.

The nest is formed on the ground under brush, tall weeds or tree branches, often amid fallen leaves, and it’s frequently within 300 feet of the male’s display area. The nest is made of dead leaves and conifer needles and rimmed with small twigs. A normal clutch is four rather large eggs for the size of this bird, and they’re incubated – only by the female – for three weeks.

The fledglings are precocial, meaning they’re up and running at birth. The youngsters’ black-and-brown pattern of markings helps to camouflage them as they grow and learn to feed themselves.

These small birds nest in my woodland and are sometimes seen along the edge of the driveway. They have a rather comical walk: a sort of rumba, moving back and forth with each step. They can hide easily, and if approached, they suddenly take off with a burst like that of the ruffed grouse.

Please read the chapter called “Sky Dance” in Aldo Leopold’s Sand County Almanac. That this great ecologist and writer found such deep enjoyment each spring in observing this spectacle is testimony to its beauty. Yes, we, too, hope every year, come each April, that there is no dearth of dancers in the sunset sky!