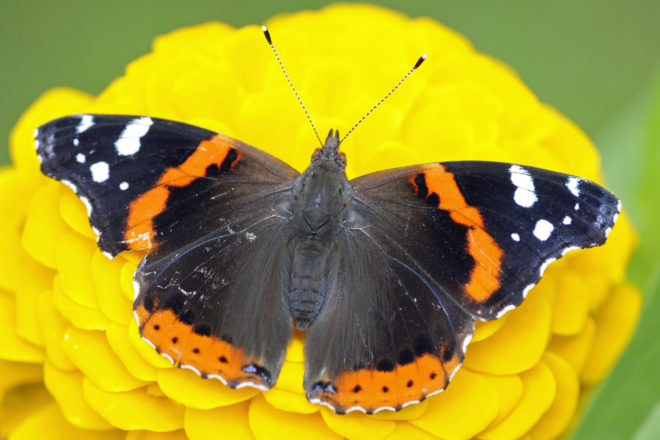 A red admiral butterfly basks in the sun on a zinnia flower. Photo by Roy Lukes.

I’ve written about birds for many weeks, but now much of the singing and mating have ended. I did hear a crested flycatcher call during my morning walk on Aug. 1, and I also heard an eastern wood-pewee and red-eyed vireo sing, but the other avian residents were quiet. Once the nesting season finishes, most adult birds go through their postnuptial molt.

Birds are easy to identify because of their vibrant colors and distinctive songs, along with the fact that so many field guides have been written about them. Butterflies are a little more of a challenge. Most butterflies have brilliant colors, but they don’t sing and are usually moving around so much that they can be hard to identify definitively. In fact, close-focusing binoculars are recommended for good viewing.

One of my favorite books is Butterflies of the North Woods by Larry Weber. It’s a good field guide for our part of the world, has great photos and indicates when the butterflies are flying. The book also tells which nectar flowers are best to attract them and provides a list of good binoculars.

These amazing insects go through four stages of development: egg, larva, pupa and finally adult butterfly. Many people don’t realize that, with a few exceptions, butterflies have short lifespans. The final stage is meant only to mate and lay eggs; then they die.

The Brushfoot butterflies include 5,000 species worldwide, with 220 in North America. They’re named for their shorter forelegs, which are covered with long hairs.

Monarch butterflies belong to this group and are the only species within it that does a true migration. With diminishing habitat, they have now been placed on the endangered list in the United States. This was predicted years ago, knowing the strains on their lives from harmful chemicals in our agricultural system to the destruction of the huge conifers in Mexico, where they spend the winter.

Many people are planting meadows of wildflowers and native milkweeds for the monarchs, and educational programs have helped the public to understand the monarch’s life cycle. But, as their numbers continue to decline, it does not look good.

This is an excellent time of year to find the fritillary butterflies. The great spangled is perhaps the most common in our area and has the largest wingspan – about three inches. They nectar on many of the coneflowers in my yard. Mating occurs in July, and eggs are deposited at the base of violet plants in the woods. Caterpillars feast on violet leaves at night and overwinter.

We found a meadow fritillary on a hike in August near the Lake Michigan shore west of Glidden Drive. It is the most common of the lesser fritillaries, with a wingspan of only 1.25-2 inches. It is double brooded, unlike the great spangled, which is single brooded, but its caterpillar also feeds on violet plants and overwinters.

Red admiral and white admiral butterflies are some of my favorites. Red admirals, with a wingspan of about two inches, are one of the earliest to appear in the spring and have a long flight period to early October. During a mild winter, the adult can hibernate, but it usually makes a short migration to the south.

White admirals are distinctive, with a wide, white band that goes through both forewings and hind wings. They can also be found flying before the end of May, but they’re gone by mid-September. We have seen a hybrid of the northern white admiral and the southern red-spotted purple in Door County. It’s called the red-spotted purple, has a three-inch wingspan and is mostly black, with beautiful, blue spots on the hind wings.

Painted lady and American lady are two other fairly common species around here. Their wingspan is about two inches, and their flight season runs from mid-May until early October. The painted lady is found in many countries of the world.

The top view of the American lady shows wider spans of orange than the painted lady. Underwings vary, with the American having a more colorful forewing and just two eyespots on the underwing. The painted lady’s hind-wing underside has four eyespots.

Learn about the butterflies that inhabit your home area, and plant more native flowers to serve as nectar sources. Study which plants the caterpillars need for food, and include them in your gardens. Above all, do not spray hazardous chemicals that can harm the insects that are so important to the lives of butterflies and birds.