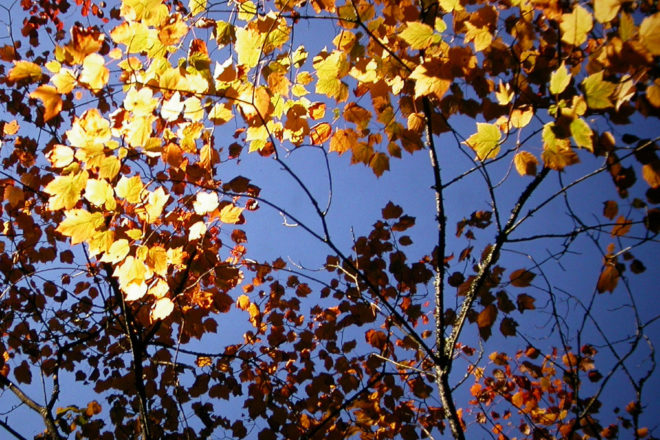 A mountain maple is normally a small tree and has bright yellow leaves in fall. Photos by Roy Lukes.

A tree that is native to northeastern America, and nowhere else, reigns supreme as the world’s overall most beautiful broad-leaved tree. Drip some pure maple syrup onto your pancakes or waffles and you will have tasted one of the finest and most healthful forms of sweetening known to humans. We Wisconsinites, along with the folks of Vermont, New York and West Virginia, can be proud that the sugar maple has been chosen as our state tree.

This outstanding species is without a doubt the best-known and most important maple in the United States, if not the entire world today. We can thank the Native Americans for discovering the general process of evaporating the sap to obtain the sweetened syrup and sugar.

The tree’s hard, smooth-grained lumber weighs about 44 pounds per cubic foot and is renowned for its use in fine furniture, floors and musical instruments. Certain parts of high quality pianos are made of this prized wood. 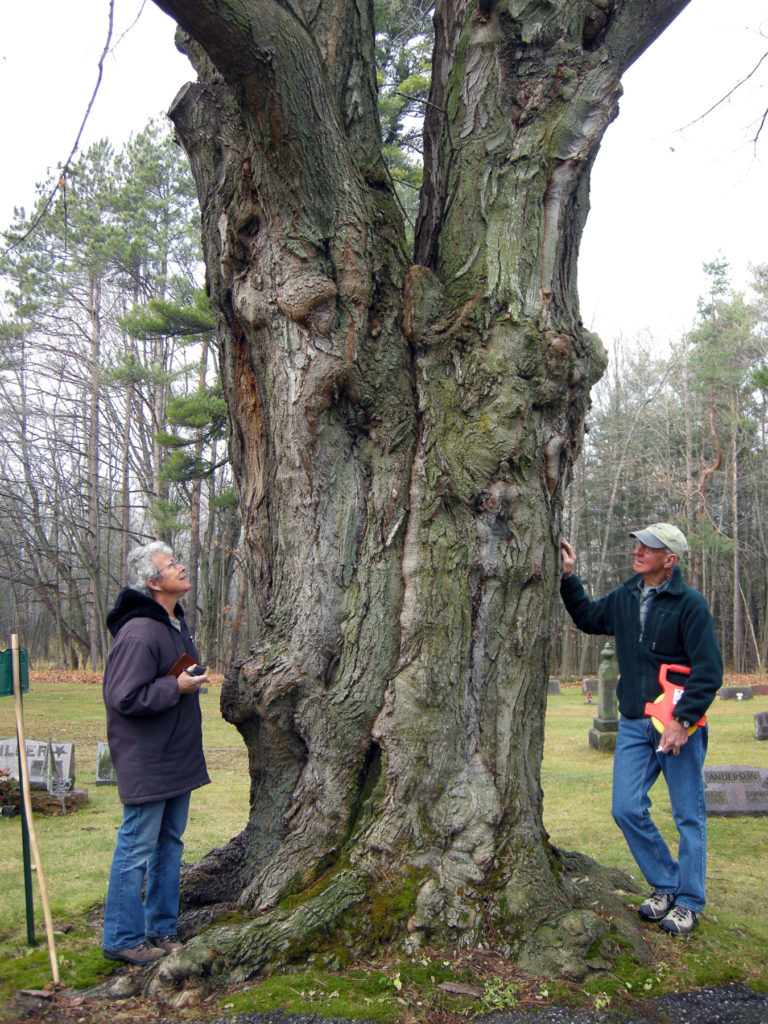 A mountain maple is normally a small tree and has bright yellow leaves in fall.

From all the reading I’ve done about the many kinds of maple trees in the world, it apparently is the sugar maple, Acer saccharum (A-cer SACK-a-rum), that ranks highest in the production of sugar-laden sap.

However, there are those people, for example in southern Wisconsin and Michigan, who would argue the black maple (Acer nigrum) produces even a finer grade of syrup than the sugar maple. By the way, these two trees are very closely related, so much in fact that some experts still claim they are the same species with very minor differences.

All of the maple species that grow well in this region of Wisconsin can be tapped for their sap and will yield syrup of varying degrees of excellence and sweetness. Even the lowly box elder (Acer negundo), a true maple, can be used although its syrup lacks the extreme sweetness and flavor of the sugar maple. Canadians refer to the box elder as the Manitoba maple.

A species that is not quite as common, the mountain maple (Acer spicatum), grows in parts of The Ridges Sanctuary and the Toft Point State Natural Area. Roy and a friend were doing some compass trail preparation for a class about 30 years ago when they came upon a record-sized mountain maple, 40 inches in circumference. At that time the national record was 18 inches in Shenandoah National Park, Virginia. Needless to say they are much smaller than the more widely known maples so can easily be overlooked. 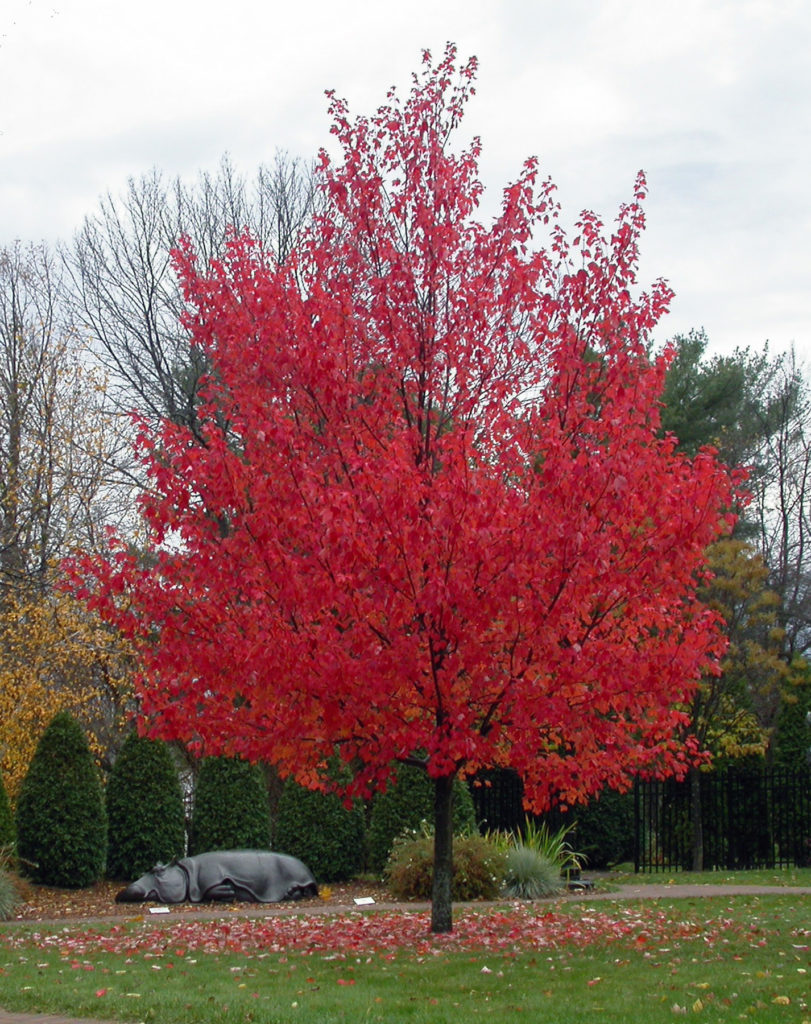 Red maples in fall have the most brilliant scarlet leaves.

Few of the broad-leaved trees of eastern North America are as abundant and widespread as the red maple, (Acer rubrum) also known as the soft, swamp or scarlet maple. The red maple is fairly common in Door County. In fact one of the largest of all the trees measured in our study was found on a trail at Whitefish Dunes State Park. It was 12 feet 9 inches in circumference at 4.5 feet above the ground and stood 88 feet tall in 2010. The state record then was 13.6 feet in circumference and 75 feet tall.

How large can red maples grow in North America? The national record in 2010 grew in the Great Smoky Mountain National Park and was 23 feet in circumference and 141 feet tall. What a giant!

Examine a red maple throughout the seasons and this tree surely lives up to its name. Its leaves in October are such an intense red that they shout at you, and the petioles (leaf stems) are also red as are the tree’s twigs. The leaves, which usually have three triangular lobes, are small for a maple. They are green in summer, red to scarlet in fall and always whitish below. It’s the amount of sunlight along with the type of soil and moisture conditions that bring about the brightest colors. The more sunny autumn days, the richer the colors will be.

The only maple tree imported from Europe and planted in this country, especially in large cities, is the Norway maple (Acer platanoides). Despite the fact that I have many good Norwegian friends, I am strongly opposed to the introduction of Norway maple trees into this country for the simple fact they readily hybridize with sugar maples, upset their genetic purity and will threaten the very existence of them in future years.

The Norway maples stubbornly cling to their leaves fully two weeks after nearly all other deciduous trees have lost theirs. The name Norway should not imply that these trees originated in that country. Rather they have been known for centuries to grow well from Central Europe to western Asia.

Several strong features interested American horticulturists in this species many years ago, namely that it grows rapidly (as much as 35 feet in 20 years), is exceptionally hardy, tough and vigorous, has good form, is especially tolerant of city smoke, dust and bad air, and is relatively unaffected by serious insect pests, fungi and diseases.

Several outstanding features of the Norway maple will help in their identification. Break a leaf petiole (stem) and it will ooze a milky juice. The blades of most of its leaves are wider than they are high, and they turn a bright yellow and remain on the tree surprisingly late into fall.

Some of these trees develop round black marks on the leaves, called tar spot, but this does not harm the tree. 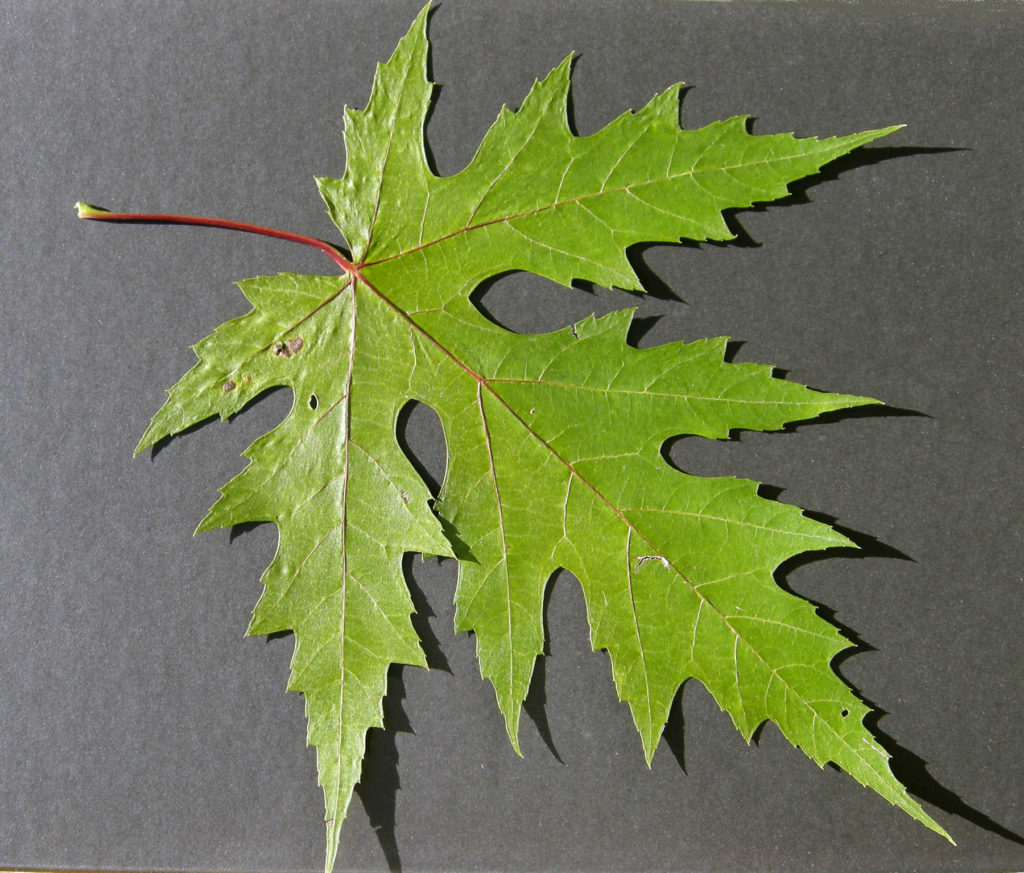 Red maples in fall have the most brilliant scarlet leaves.

The silver maple (Acer saccharinum) is Wisconsin’s largest maple species. In fact, the biggest silver maple in the United States in the year 2000 was in Columbia County, Wisconsin. It was more than 24 feet in circumference and stood 115 feet tall.

The silver maple, like its relative the red maple, is called a soft maple. It is a vigorous grower and does best in river bottoms, floodplains and along lakes and ponds. The leaves, deeply lobed, sharply pointed and long-stalked, are easy to distinguish from those of other maple species. The light green upper surface contrasts nicely with the soft, silver luster on the bottom sides, a feature that contributed to the tree’s name. Unlike the sugar and red maples that display brilliant orange-red autumn color, the leaves of the silver turn a soft yellow before falling.

As is true for most maples, the growth of the silver maple is rapid for the first 25 to 30 years, reaching full size at 90 to 110 years. Seldom do they live to be more than 125 to 140 years old. On the other hand, the sugar maple has been known to reach 250 years of age.

So many people believe that one or more hard frosts help to produce rich autumn colors. The exact opposite is true. Frosts dull the colors and promote a faster drop of foliage. 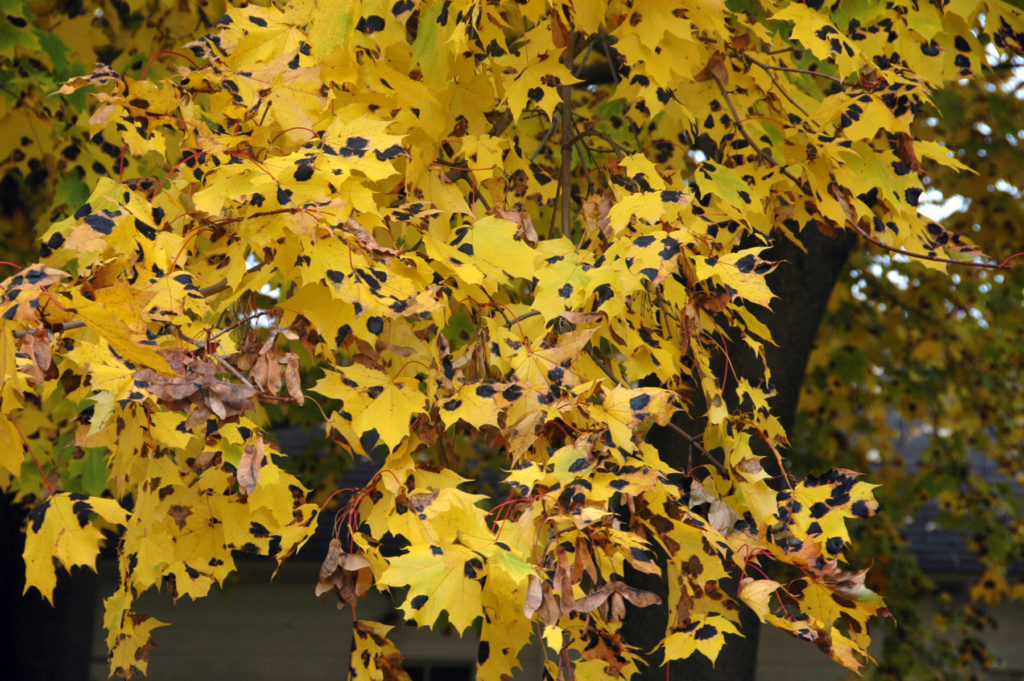 The same yellow coloring — carotenoids — that is in the leaves is also responsible for the yellow color of butter, corn, daffodils, egg yolks and the orange of carrots. We, however, don’t see it in summer because it is masked, hidden from view by the green chlorophyll.

But in fall a thin separation substance made up of corky cells, called the abscission layer, begins to form across the end of the leaf stem. This blocks much of the flow of water into the leaf.

Without water photosynthesis stops and the chlorophyll in the leaves slowly disintegrates, exposing the carotenoids that were present there all the time. Then plenty of blue-sky sunny days will help bring about the finest of fall colors in the sugar maples and other deciduous trees.

Spend some days outdoors in the countryside this autumn to enjoy the extravaganza of the season’s colors. Learn the different species of maple trees and compare their leaves and changing autumn hues.

The crimson leaves are falling fast; the bloom of summer now is past. The cold north breeze, the dark clouds high, the scarlet trees, the wild geese fly — this is autumn’s cast.