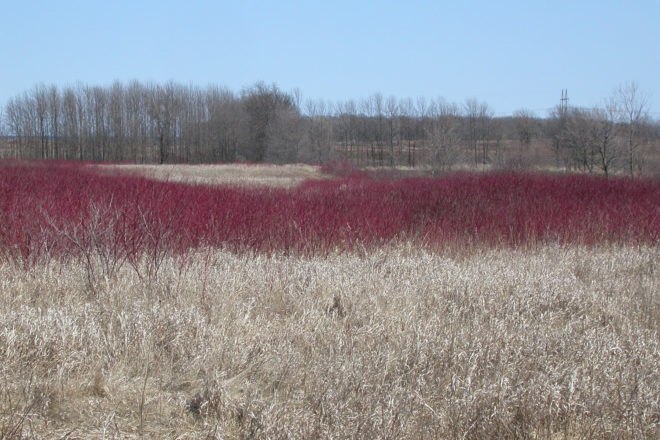 Here is a stand of red osier dogwood in southern Door County. Photo by Roy Lukes.

Few native shrubs in northeastern Wisconsin are as easy to identify in a winter landscape, even from a distance, as the red dogwood. The crimson-red stems visually announce their beauty along practically every lakeshore, in moist thickets, in marshes and along the margins of swamps.

The name “red osier dogwood” is what many people call this handsome plant. Strangely, osier refers primarily to willows, but apparently there is enough similarity between the two to have named this favorite shrub with that term, and willows often grow in the same environment.

Our Southern Door Christmas bird-count circle includes portions of the area near the Ahnapee State Trail. The part that runs southwest of County Road S through the section that the old-timers used to call the “hungry settlement bog” has many acres of these handsome plants.

White-tailed deer are very fond of the tender newest twigs, especially during the cold months. One look at the tips of dogwood plants that have been partially eaten will tell you whether they have been eaten by deer. Deer lack the incisors (sharp front teeth) that make clean cuts the way cottontails’ teeth do, so deer virtually rip the twigs off the plant, leaving very jagged ends.

If you hike into a large deer-frequented territory where red dogwood ordinarily grows and find none of these shrubs, you can assume that the deer population is considerably out of control. Where plenty of red dogwoods grow naturally, there the deer are not hurting for winter food because the “carrying capacity” of the land – for the deer and other wildlife – is in good balance.

Common and scientific names of plants and their derivation can be interesting and somewhat confusing at times. The plant’s genus name, Cornus, stems from the word “cornu,” meaning a horn. This is an allusion to the hardness of the wood.

My late husband, Roy, was given a sharpening stone by a good friend who lived in southern Indiana. The stone was enclosed in a handmade wooden case made from a flowering dogwood, a very common plant in that area. That wood has incredibly fine grain and hardness, and it developed a lovely sheen from years of handling. For a long time the hardwood spindles in spinning mills in the South were made from the wood of flowering dogwood.

How the word “dogwood” came into being varies from one region to another. One could almost consider it an insult to associate a beautiful plant group with mangy dogs of years ago, but that is exactly how the dogwoods got their name in at least one area. A decoction made from the bark of the bloodtwig dogwood (Cornus sanguinea) was commonly used in England to wash dogs infected with mange.

The bloodtwig dogwood of Europe was also responsible for another version of the term “dogwood.” European butchers of years ago made skewers from the wood of this plant, so the tree was called skewerwood or “dagwood,” from the Old English “dagge,” referring to a dagger or sharply pointed object.

The species name of red dogwood, stolonifera (stow-lon-IF-er-a), comes from the fact that it is stoloniferous: it sends out runners or lower branches that take root and develop into new growth. Seeing the vast acres of these close-growing, brilliant-twigged shrubs – as in the wetlands west of the Ahnapee Trail – easily leads one to assume that not only are they growing in an ideal environment but also that the plants have an unusually dependable method of reproducing.

In addition to enjoying its splendid red twigs in the winter, we also marvel at its habit of blossoming intermittently throughout the summer and early fall. Look closely at one of the shrubs during these two seasons, and you should be able to see buds, flowers and fruit in various stages of ripening – all on the same plant.

Few other plant groups include herbs, shrubs and trees as does this notable dogwood family. A common characteristic of all three forms are the leaves. For the most part – with the exception of the alternate-leaved pagoda dogwood of our area – the leaves are opposite, oval, pointed and lack marginal teeth. Veins curve gracefully outward from the center of the leaf toward the edges.

Dogwood flowers lack petals and instead have four whitish sepals. Even the flashy flowering dogwood trees of the South display large, showy sepals that nearly everyone thinks are petals. The actual flowers in the center of the four sepals are tiny and don’t even resemble flowers until you take a close look.

The same features are found on one of my favorite low-growing flowers at the Ridges Sanctuary: the Canada dogwood, Cornus canadensis. It sets a perfect example of the leaves, sepals and flowers typical of this family.

Go out of your way to learn about the dogwoods. Their fall colors, winter twigs, leaves, four-parted flowers and clusters of fruit (white for the shrubs and red for the Canada dogwood) all help to make them one of the most loved and important wildlife families in America.