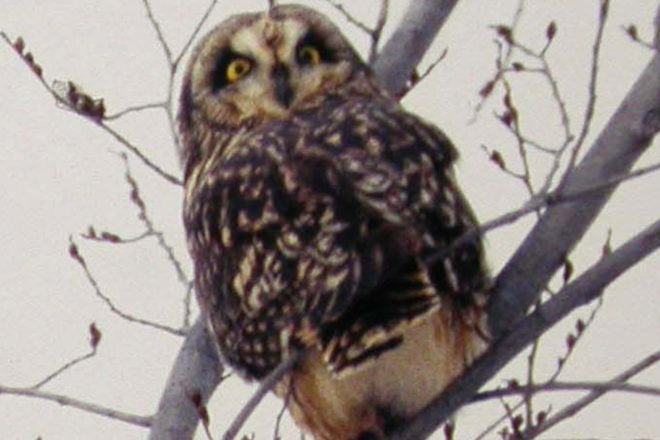 This short-eared owl has turned its head 180 degrees and looks at us over its back. Photo by Roy Lukes.

If you know anything about birds, you’ve probably heard of a great horned owl. But does it really have horns? No. But it does have feather tufts that can stand up and resemble small horns.

There are two other species with common names that are a bit unusual: the long-eared owl and the short-eared owl. You cannot actually see the ears, but here again, it’s the feathers on the head that have given rise to these names.

A local birder reported seeing a short-eared owl hunting over a field between Egg Harbor and Baileys Harbor on Valentine’s Day. That species is not often seen here, so it was an interesting post on the Doorcountybird email chat room.

It made me think about the colony of 30-50 short-eared owls that spent much of the winter in a large area of fallow fields and marshland three miles southeast of Brussels. It was in January 1995 when someone told my late husband, Roy, about a strange owl he had seen there.

We drove to the area and parked on a side road later in the afternoon. There was a large Christmas tree plantation just to the south. Fortunately, the snow cover was very light, which allowed the fields to harbor quite a population of meadow mice: the favorite food of these owls.

Northern harriers were also present, searching for the same prey. Harriers used to be called marsh hawks and are beautiful fliers, skimming low over the grassland. They tend to hunt earlier in the day, whereas short-eared owls begin looking for mice in the mid-afternoon into dusk.

Short-eared owls dwell on every continent except Australia. They live throughout North America except in the extreme northern Arctic region. They typically breed in Canada and into Alaska but have been known to nest as far south as New Jersey, Ohio and Kansas. Their winter range is in much of the United States.

The population density of voles and mice affects the breeding and overwintering habits of these owls. When voles are abundant, owls nest or remain in their winter location, but when the rodent numbers crash, the birds may not even breed.

They nest on the ground, often choosing a small ridge or hummock well hidden among tall grasses. The female makes a small depression about 10 inches wide and lays four to seven eggs. They’re incubated for a little more than three weeks, and the chicks fledge in about a month. Adults defend the nest site the way a killdeer does: by feigning injury to lead the attacker away from the eggs.

Adult short-eared owls weigh only nine to 12 ounces and are about 15 inches long: roughly the size of a large crow. Their wingspan is about three and a half feet. The ear tufts are so small, widely separated and seldom elevated that this feature is not a reliable factor in identification.

Instead, it’s the low, bobbing flight – somewhat like that of a nighthawk – that is a more reliable identifying feature. A side view reveals the stubby head and short, thick neck. Unlike most other owl species, short-eared owls typically perch more horizontally, resembling the posture of hawks.

The round facial discs surrounding the yellow eyes are generally small for the size of the owl. They are thought to serve like parabolic reflectors, helping to concentrate sounds into the owl’s ears, located beneath facial feathers and to the rear of the eyes.

Great vision is possibly more important than hearing because they hunt as much during the daytime as at night. Their hearing is acute, however, as it is in all owls, courtesy of very large, asymmetrically placed ear cavities. Reports have said that their hearing is so great that they can detect a running mouse 250 yards from them and a squeaking mouse as far away as an eighth of a mile!

They flap and glide low over grasslands and can hover in place with silent wings, allowing them to hear their prey. They have small feet for their size, but also sharply pointed black talons with strong gripping power.

Once aloft, the bird appears to be quite large. Strong, wide wings serve the short-ear well as an extremely agile flier that often performs astonishing aerial maneuvers. The bobbing flight, considerably like that of the snowy owl, is such that the body appears to rise and lower with each wingbeat, as though the wings remain on a level plane and the body moves up and down.

These owls should be welcomed visitors or nesters for farmers, orchardists and tree growers because of their great value in controlling the population of small rodents. And we birders are also thrilled at seeing the graceful hunting flight of these agile short-eared owls.