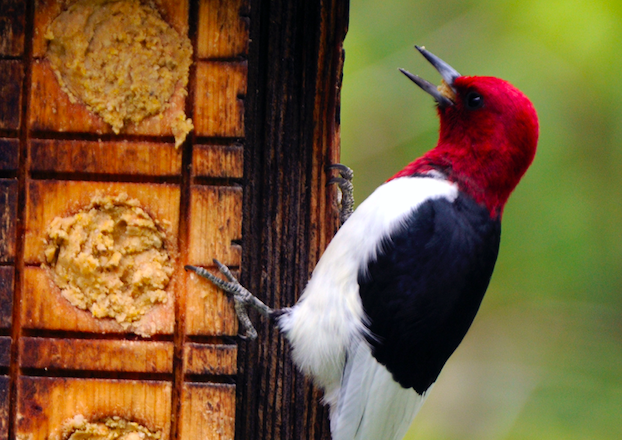 A red-headed woodpecker has a chunk of marvel meal in its beak. Photo by Roy Lukes.

I’ve noticed reports of more red-headed woodpeckers being seen this year in Door County, and that makes me happy. This flashy bird – with its entirely red head extending down its neck, forming a cape – has suffered serious habitat loss during the last 50 years.

My friend Deb has a pair that spent the entire winter in her yard and feeders in Ellison Bay. There is also a nesting pair west of my property, and one comes into my yard, well into the woods, to eat suet and enjoy the shelled peanut halves that I place on the feeder platforms.

National Breeding Bird Surveys conducted from 2005 to 2014 totaled 1,600,000 red-headed woodpeckers: a 60 percent decline from the record numbers of the 1970s. At one time, they were very common, but now they’re not as widespread as they were during the last decades of the 20th century.

Their diet once consisted of beech nuts, which were produced on trees that were at least 50 years old. Now that beech bark disease is killing so many of the large trees, they must find other food sources. Acorns are another favorite.

European starlings compete with the red-heads for nesting holes in trees. Nesting success increased with the onset of Dutch elm disease, which killed many of the big trees but decreased once the dead trees were removed from the landscape.

Now the emerald ash borer is killing many ash trees, but perhaps the ashes’ demise will create another group of nesting sites. Red-headed woodpeckers prefer standing dead trees that have lost their bark – exactly what’s happening to the ash trees.

Starlings, kestrels and other smaller woodpeckers compete for cavities. Red-heads like to stash food in the bark of trees for later use, but blue jays and starlings often steal this food.

The female red-head chooses a barkless, dead, standing tree or a dead stub on a living tree. The entrance hole can be anywhere from eight to 80 feet above the ground. In treeless prairies, she may choose a wooden fence post or utility pole, but it was found that creosote-coated power poles were deadly to eggs and the young reared there. Red-heads avoid using human-made nest boxes.

Their varied diet includes insects, nuts, corn, berries, seeds, sometimes the eggs of other birds or even newly hatched young. Both males and females excavate the nest cavity. They can act like flycatchers, swooping out from a tree to snatch insects in the air.

The normal clutch size is four to five eggs, with extremes of up to seven; and two broods per summer is common. Both parents do the incubating, which takes 12 to 13 days, and the male often sits on the eggs during the night.

Parents feed their young insects, worms, spiders and berries. The baby birds remain in the nest, being fed by both parents, and they can fly at about four weeks old.

I remember seeing a family of red-heads in our woods many years ago during the fall and throughout the winter. The adults dutifully cared for the young as the group stayed together. The youngsters had dark-gray heads that gradually became red the following spring.

The red-headed woodpecker is the same size – about nine inches – as the more common hairy and red-bellied woodpeckers, which often compete for food in certain woodlots. The downy woodpecker is six and a half to seven inches, and the pileated woodpecker is more than 16 inches.

These birds do not migrate as far as many songbirds do, spending the winter in the United States. If a male has a winter habitat selected, it may become the nesting site when a female arrives.

Please help these fabulous woodpeckers, and many others, by keeping some dead trees standing in your woodlot. They may become the home for a family of red-headed woodpeckers that will entertain you during the summer months.