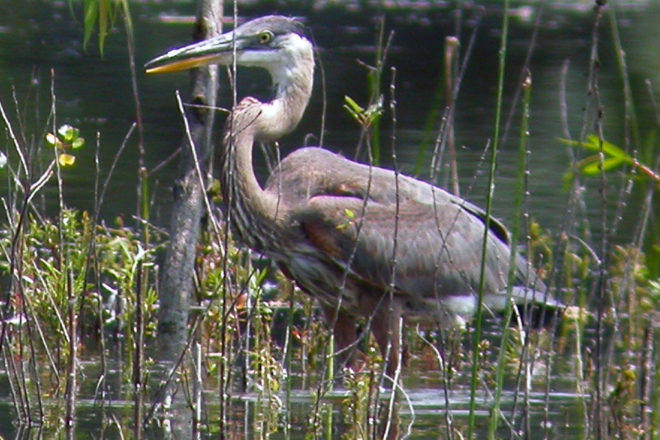 The great blue heron’s neck is held in an “S” shape because of the unequal vertebrae. Photo by Roy Lukes.

Have you ever heard of a “flying wheelbarrow”? That’s the term I learned when starting my adventures in bird-watching. It refers to the great blue heron, flying with its head and neck tucked into its chest and the two long legs sticking out the other end. The curved neck appears somewhat like the front wheel of a wheelbarrow, and the two legs are the handles!

The sandhill crane is another large bird that flies here, but it holds its neck straight out, creating a long, slender appearance. Cranes nest on the ground near swamps, and great blue herons often nest in a colony high in deciduous trees. Both are common wetland scavengers for food.

Vertebrae are responsible for the notable difference between how a crane or swan holds its neck and how the great blue heron does it. A heron’s neck bones are of unequal lengths, which causes an “S” shape.

They belong to the family of large wading birds that includes the stork and the great egret, which is the shortest of the group at 39 inches. Wood storks, native to Florida, are about 40 inches tall; sandhill cranes are 42 inches; great blue herons are 50 inches; and whooping cranes stand 52 inches tall.

A white form of the great blue heron lives in Florida’s Everglades and southern keys. It’s called the great white heron and stands as tall as our great blue heron. Its legs are pale compared to the black legs of the smaller, white great egret.

Locations of great blue heron nests in the U.S. can vary. Many in Florida are built in low mangroves; at the Great Salt Lake in Utah, nests are on the ground amid rocks; and they’re on ledges bordering the Colorado River. The nest is large and made with interwoven sticks, so the ledge or shrub beneath it must be substantial. Great blue herons often nest in colonies, but they can have a solitary site as well.

The female lays a clutch of three to five eggs, with four being the most common number. The eggs are incubated for 28 days; then the young are in the nest until they’re nearly two months old.

Adults search rivers and marshes for fish, small reptiles and amphibians to feed their young. They stand motionless for extended periods, waiting for fish to appear, then quickly lunge forward to stab or catch the prey with their long bill.

One year, someone found a dead great blue heron along the shore of Lake Michigan. We went to see the bird to photograph it. The feet are large, with an intriguing claw on the middle toe. The edges looked like a comb with rounded teeth, which the heron uses to clean its feathers of dirt and debris picked up from the marshy habitats where it hunts. The bird’s hind toe is level with its front three toes, so the bird stands on all four of its toes.

This largest of North American herons weighs only five to six pounds because of its hollow bones, and it has a wingspan of 70 inches. Its nesting range is across most of the United States and into the southern edge of Canada, east of the mountains. They can hunt day and night thanks to a great number of rod-type photoreceptors in their eyes, which help them to see in dim light. Door County records of spring arrival dates during the past 19 years show arrivals as early as March 9 and as late as April 19. The longest living great blue was recorded at 24 years, six months.

They are strictly loners when hunting, but they’re very sociable and like company when nesting. When you observe one of their colonies, you’ll see that it’s not unusual for their stick nests to be 100 feet above the ground, in trees often growing in swamps. A great blue heron rookery may be more dependent on a good, nearby source of food than ideal trees.

The birds’ whitewash excrement liberally coats tree branches, trunks and the ground below, frequently killing the trees. This whitewash – along with dropped dead and rotting fish – produces an odor not soon forgotten by those adventurous people who visit a rookery.

Some of these large herons’ actions, especially when landing on the nest, are far from graceful, but every action is carefully executed to protect their “livelihood”: their long, stately legs. Without even one of them, the great blue heron would be doomed.