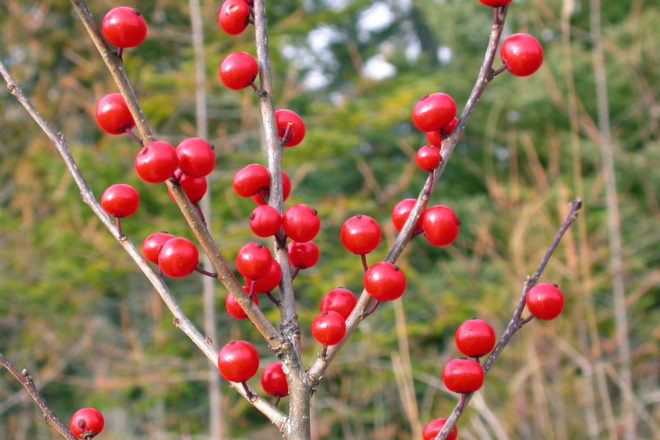 The red fruit on leafless shrubs of northern holly really shows up in the wetlands of northern areas. Photo by Roy Lukes.

Now is the time for Christmas decorations and traditions. Holiday songs express the joys of seeing holly berries and their dark-green leaves, and kissing under the mistletoe.

The popularity of these two plants goes way back to olden days in northern Europe. The green leaves and red berries of holly offered a reminder of living plants during the dark, cold winter months and brought some color to the drab, white landscape. Mistletoe berries are white, and the small branches were saved to hang above doorways or other high places so that someone caught under them would be kissed. Both mistletoe and holly berries are poisonous to consume.

Texas and Oklahoma are home to the mistletoe that infects deciduous trees. The plants live high on the upper branches and actually send their roots into the tree to take advantage of the nutrients found there. Small birds can nest in the clumps of mistletoe and consume the white berries. Then the seeds, contained in their droppings, are spread to other trees.

There is a very different type – dwarf mistletoe – that grows on spruce trees in northern forests and has been found in The Ridges Sanctuary in Baileys Harbor. Its scientific name, Arceuthobium pusillum (ark-u-THO-be-um pew-SIL-um), is Greek for “juniper living,” but strangely, these miniature plants never grow on junipers.

This species – one of five in the country – is found in the Great Lakes region and eastward and is common on spruces. Biologists say this parasite is almost always found on black spruce trees and hardly ever on white spruces. I remember hiking trails at The Ridges and always seeing it on the white spruce and never on black spruce.

The root structure of this serious pest develops a strong absorption system that helps it live off the bark and wood of the host tree for many years. This devastating action, if started on a twig near the trunk, can grow into the trunk and become so systemic that the tree is doomed.

The damage to the tree takes several years to materialize. Mistletoe flowers are dioecious (die-EE-shus), meaning there are separate male and female flowers. The fruit on the female flowers takes two to five years to develop.

The fruit absorbs water, which produces hydraulic pressure that helps the casing to rupture in fall. A tiny, two-millimeter-long, sticky, bright-green, projectile-shaped seed is literally shot out of its chamber. It is streamlined and thus has little wind resistance, so it can travel at a speed of nearly 90 feet per second. That’s about 60 miles an hour! The small amount of viscin carried with the seed helps it gather and hold moisture for the protection of the tiny root.

Holly plants can be small shrubs or fairly tall trees. The southeastern part of the U.S. is home to many Aquifoliaceae – or holly-family – plants. The best known is the American holly, Ilex opaca, which has shiny, spine-edged leaves that remain on the tree well into winter. None of the other hollies are so spiny. Some have black berries and are smaller shrubs.

Several hollies are called winterberries. They are the ones found in our part of the world, and they can be shrubs or nearly tree-like. They lose their leaves in the fall but retain the clumps of bright-red berries. Our plants are called Ilex verticillata and range north to Newfoundland.

We enjoyed taking scenic back roads during our autumn trips to Wausau to view the annual Birds in Art exhibit. The wetlands near Shawano Lake and the swampy areas east of Wausau were loaded with the red berries of northern holly. The leafless shrubs were so noticeable in the brown autumn landscape.

It shouldn’t be surprising that the winterberry – having such a large quantity of brilliant fruit well into winter, when the plant has lost its foliage – attracts so much attention. The wide range of its growth has produced many colloquial names, such as Christmas berry, coralberry, Michigan holly, northern holly, deciduous holly and fever bush.

The shrub blooms with extremely tiny, short-stalked, white blossoms in the axils of the branches. The flowers of the dioecious plants look alike, but the male blossoms, usually several to a cluster, contain the pollen-bearing stamens. The female blossoms, which tend to be singular, contain the pistils, which eventually form into the rich-colored fruit.

Look for the red berries on shrubs of roadside wetlands as you travel during this holiday season, and be thankful for this natural decoration in our precious swamps and marshlands.