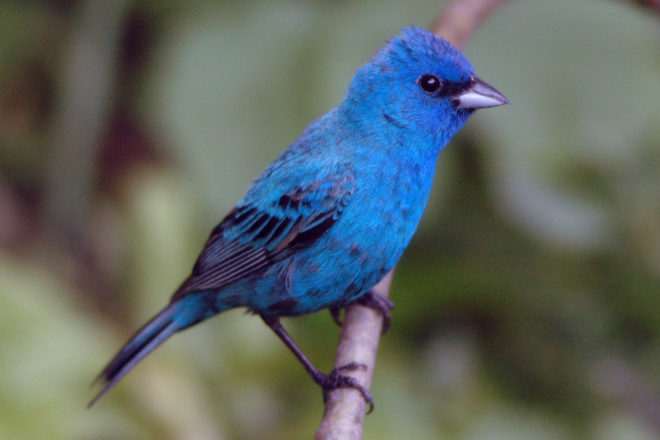 A male indigo bunting in its third year will have intensely blue color on all of his body with a little black in his wings. Photos by Roy Lukes.

My feeders in the front yard have been well populated with indigo buntings this spring. You can tell them apart by the brilliance of their plumage, at least the young males from the mature. Male indigos that hatched last year will still have some brown in their body and head feathers. Older birds are entirely an intense blue. In fact, when observed with binoculars in good light you can see several different shades of blue with the deepest color on the head. I have counted at least six different males at the feeders.

A few female indigo buntings are visiting the feeders, too. They are a soft medium brown with faint vertical streaks on their breasts and a small whitish wing-bar. One feature that both sexes have is a lower mandible (beak) which is pale gray or silver in color compared to the upper part of the beak, which is darker.

They seem to be omnivorous. The small black oil sunflower seeds are their favorites and a few have also found the hulled seeds in my new tube feeder. They also eat cracked corn scattered on the ground and several have eaten the grape jelly put out for the orioles. Today was the first time I watched a male indigo eat thistle seeds.

There are a lot of American goldfinches at the feeders and when those bright yellow males eat next to the deep blue indigos it warms my heart to see my school colors together again. My high school and college had blue and gold for their colors, as does the Door County school for which I pay property tax. 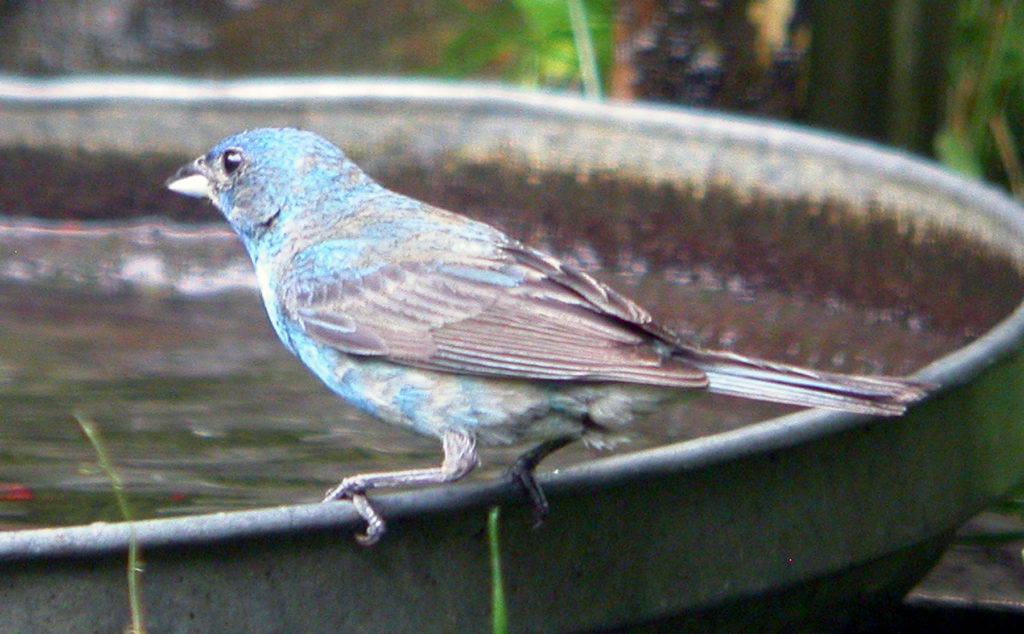 This indigo bunting shows patchy blue and brown in its feathers indicating it is in its second year. The pale gray lower beak is easily seen on this bird.

Weedy fields with scattered shrubs and small trees are the habitats theses buntings prefer. You may also find them in hedgerows, overgrown fence rows, edges of woods and roadside thickets. The female will weave a nest of dried grasses, small twigs, bark strips and weeds in a shrub or low tree. Years ago when we had a big raspberry patch Roy found a well-concealed indigo bunting nest in the middle of a raspberry bush. The female does all the building and will line it with fine grasses to form a cup. Sometimes animal hair and small feathers will be incorporated into the structure.

A clutch of 2 to 6 eggs will be laid; 3 to 4 is the most common number per brood. They will be incubated for around 12 days and the blind helpless young will take about 9 to 10 days to grow. Their first flight will be to a nearby shrub or small tree where the dad will help feed them as they learn to fend for themselves.

The first batch of youngsters is on their own frequently, soon enough for the pair to have a second nesting. You will find the indigo bunting breeds in much of North America east of the Rocky Mountains from southern Canada to northern Florida and as far east as the Atlantic coast. They will migrate to Central America and the Yucatan for the winter months.

A western relative, the lazuli bunting, nests in the far western part of America and up to British Columbia. It has more brown in its plumage and is not as intensely blue as our indigo. Some may even confuse it with a western bluebird.

The buntings belong to the family of sparrows, grosbeaks, buntings and finches. All tend to have cone-shaped beaks perfect for cracking open seeds.

Few bird songs are as easy to identify as that of the indigo bunting. Sung usually in phrases of two, the notes are different-pitched and tend to become weaker at the end. In upper Michigan near the northern limits of its breeding range, where the amount of summer daylight hours is greater than in our area, these radiant repetitious singers are known to chirp from 4 am to 8 pm. One counter studying the vocal accomplishments of this amazing creature estimated that one male might sing his rollicking melody as many as 263,000 times in a period of 61 days.

Look as well as listen for indigo buntings along the edges of woodland clearings, where roads border wooded areas, especially where there exists brushy ground cover. Remember, the males like high singing perches including electric wires and TV antennas. 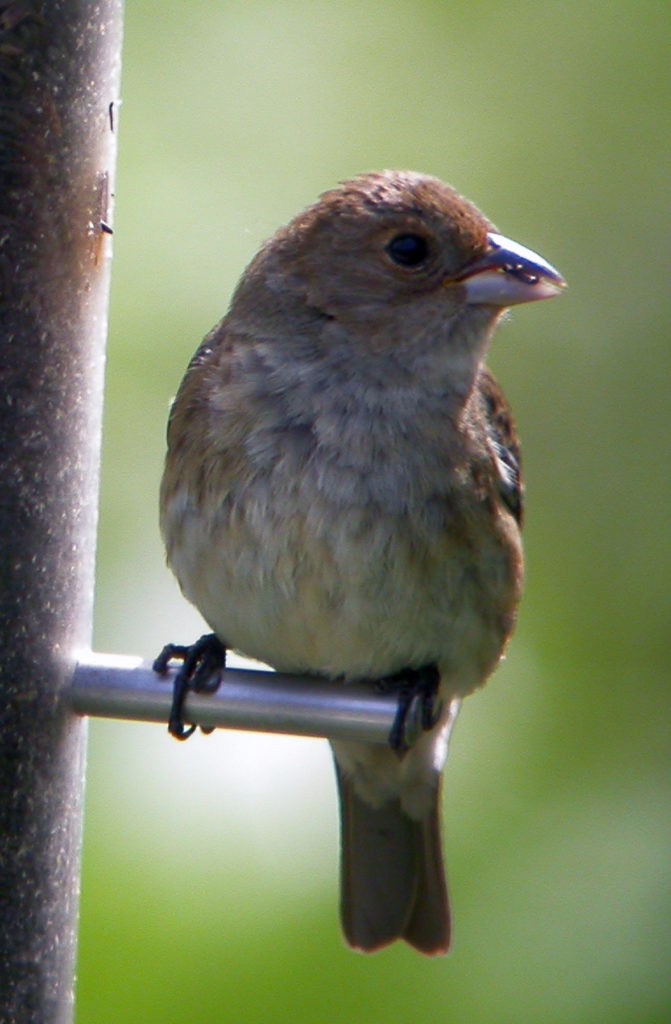 The female indigo bunting is mostly light brown with faint streaking on her breast.

“Sweet sweet, where where, here here, see it see it.” That is a phonetic likeness of the sounds made by this ultramarine-blue songster. The many birding groups we took out for early morning adventures would hear this bird and finally it appeared at the top of the tallest tree in the area. It is not easy to identify when sitting high in a tree against a bright sky.

More than one person in the past on our bird hikes, in observing an indigo bunting perched between us and the sun, has been known to say, “How can that be an indigo bunting? It’s black, not blue!”

They are right. The male indigo bunting is black when seen backlit by the sun. Had we seen that bird to the west of where we stood with the early morning light to our backs, the male would have appeared to be a sparkling luminous rainbow-blue. The reason I say “appeared” is that the bunting has no blue pigment in his feathers. The same goes for the bluebird and blue jay. Rather, individual feather cells refract or bend the reflected light from the bird to our eyes so as to cause him to appear blue. When backlighted he is dark gray or black.

Farmers and orchardists should welcome buntings to their land. Scores of harmful insects, including grasshoppers, beetles and caterpillars, along with weed seeds make up most of their diet.

Make a bee-line to bunting country, indigo that is. Learn its song, discover its favorite perches, then enjoy its sprightly, colorful concert for the remainder of the summer. Unlike most other birds, the indigo bunting continues to sing well into late August and early September. Let this tiny patch of sky with the heavenly voice into your life!