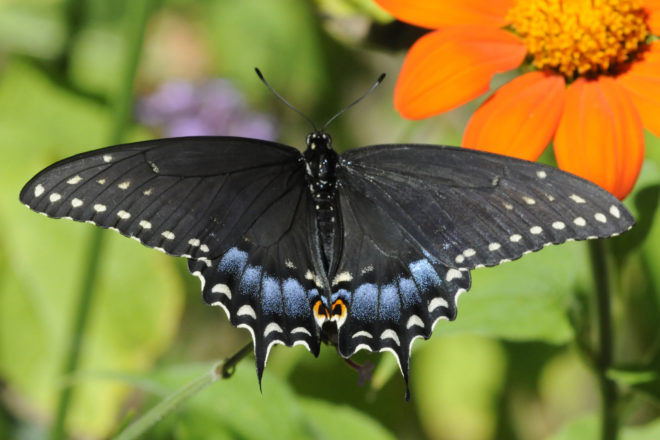 Few creatures are as gentle, harmless and beautiful as butterflies. They don’t chase, bite or sting you, and they cannot transmit diseases. I look at butterflies as winged flowers — radiant patches with golden freckles, lazily flying, fluttering, frolicking, basking in the sunshine. They are perfect examples of peace and tranquility.

Indeed, butterflies are insects of sunny days — “sun worshippers” that you seldom see on cloudy days. It’s almost as though the sun provides them with the power of flight.

Butterflies and moths come in such a variety of sizes and colors that many nature lovers record butterfly observations along with their bird watching. There’s even a book titled Butterflies through Binoculars — The East: A Field Guide to the Butterflies of Eastern North America by Jeffrey Glassberg.

One of the easiest butterflies to see flying is the brilliant yellow tiger swallowtail. I used to call it the eastern tiger swallowtail until I learned that our species is a cousin, called the Canadian. During some springs, it is the second large species that we see. The normal range of the eastern is the far southern and southwestern part of Wisconsin and most of the southeastern half of the United States.

The wingspan of the Canadian can be up to four inches, with females generally larger than males, and the eastern’s wingspan is five to five and a half inches. The black bands on the Canadian’s forewings are usually wider than those on the wings of the eastern swallowtail.

The Canadian tiger swallowtail has one brood per summer, and the eastern has two. You can see the Canadian in our area from mid-May to mid-July. Adults draw nectar from lilacs, blackberry blossoms, honeysuckle, wood lily, cherry blossoms, wild iris and Labrador tea, which grows in The Ridges Sanctuary. The larvae feed during the night on leaves of quaking aspen, birch trees and willows.

The black swallowtail has a wingspan of three and a half to four and a half inches. It can be seen in our area — but not as commonly as the yellow in some years — and can be confused with the black form of the eastern tiger swallowtail. Look for a twin row of yellow spots on both the fore and hind wings. Female black swallowtails have more blue on their hind wings. You can expect to see them flying over clover and alfalfa fields. Their striped larvae feast on plants in the carrot family, including carrot, dill, parsley and parsnip.

The spring of 2012 was exceptionally warm, with a few 80-degree days in March. That year my late husband, Roy, was photographing numerous butterflies nectaring on lilacs at Mud Bay in the Toft Point State Natural Area. It was on May 24 when he found a pipevine swallowtail, which is found in the Deep South and as far north as southern Illinois and Indiana. The extreme heat of that early spring apparently pushed them farther north than usual.

The undersides of the pipevine’s hind wings have broad, blue colors with strikingly large, orange spots. These contrasting colors against the purples and pinks of the lilacs were breathtaking. The caterpillars feed on noxious pipevines in the South, which makes the butterflies poisonous — or at least distasteful — to predators.

The rest of the large butterflies in our region belong to the brushfoot group, in the Nymphalidae family. There are about 5,000 species in the world and 220 in North America. The brushfoots get their name from their greatly reduced front legs, which are hidden by short hairs, making these creatures appear to have only four legs instead of the normal six.

The flashy, orange-and-brown great spangled fritillary butterfly is the largest of this widespread group. They are also called silver spots due to the pattern on the underside of their hind wings, and they have a wingspan of up to three and a half inches. You can see them flying over fields, roadsides, moist meadows and forest edges from late June to early September.

Monarchs, also brushfoots, have a wingspan of three and a half to four and a half inches. They are a migrating species that can arrive in Door County by early to mid-May. These fragile beauties have received much attention because their population has been declining greatly during the past few decades.

I saw my first mourning cloak butterfly on April 15 this year. It overwinters in our area and is one of the longest-living butterflies — up to 10 months or more. Its larvae feed on willows, elms, cottonwood and birches. Its dark-brown, three- to four-inch wings highlighted with a golden band at the outer edge make it easy to identify, and few butterflies are flying as early as this one!

The white admiral butterfly has flashy, black wings with a broad, white stripe across each that forms a horseshoe when observed from the top. It can be seen from late May to early September. The caterpillar feeds on the leaves of birch, willow, aspen and cherry trees. The adults are unusual in that they don’t usually seek nectar from flowers but often get nutrients from bird droppings, aphid honey, mammal scat, puddles and wet sand.

Large moths with wingspans of three to six inches have become more rare in recent years. The three that we may see are the luna, cecropia and polyphemus, all of which belong to the giant silkworm family and the subfamily Saturniinae. These are related to the silkworm moth, Bombyx mori, which the Chinese have raised to produce silk fabric starting around 2697 B.C.

The caterpillars of these large moths are thick and fleshy, with spines or bristle-clumps on raised tubercles. They feed on the leaves of birch, ash, beech, alder, grape, maple, oak and pine trees and members of the rose family. They form a cocoon, which is suspended from a tree branch or hidden in leaf litter on the ground.

Butterfly larvae form chrysalises, and moth caterpillars form cocoons. Some overwinter in that stage. Another difference is that the moths usually have pectinated (comblike) antennae, and butterflies have long, thin antennae with a small knob or swelling at the end.

Cecropia and polyphemus moths have the greatest wingspan — six to seven inches — and the luna’s can reach more than four inches. Many moths are active at night, and they are especially attracted to outside lights left on. That’s how Roy was able to photograph several of these beauties in June 2012: An outside light had drawn the moths to rest on the side of a neighbor’s house.

Once you see the large, spectacular silkworm moths, you will never forget them. The cecropia has red, white and black bands around its plump body and fabulous colors and marks on its dark wings. The luna is a delicate green, with a small eyespot on each wing and long, swallowtail-like extensions on its hind wings. The polyphemus is a soft, medium brown, with a large, single eyespot on the hind wing that almost looks like that of an animal.

We can help sustain the lives of these wonderful, winged creatures by avoiding pesticide use and encouraging native plantings. Though light and delicate, butterflies and moths are powerful reminders of how fragile our planet is. Learn more about them, protect them and enjoy them to the fullest!