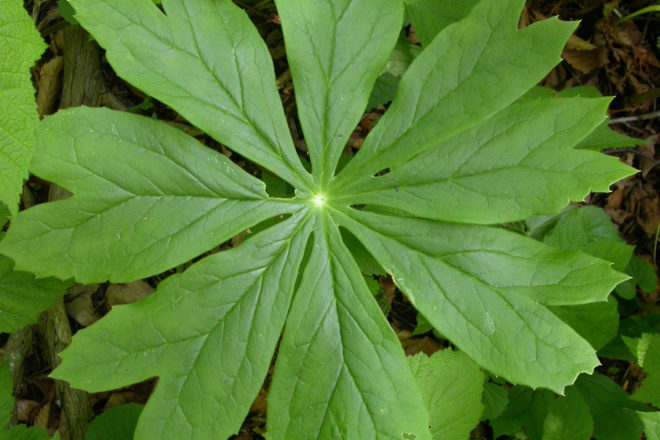 The large mayapple leaf is easy to identify once seen in the wild. Photo by Roy Lukes.

It was 18 years ago when my late husband, Roy, and I were guests of friends who lived in southwest Wisconsin near the Kickapoo Valley. We explored this fascinating land and found many wildflowers blooming there that were not common in Door County.

We saw large patches of mayapple plants that were totally new to me, a big-city Milwaukee native. The scientific genus name, Podophyllum (po-do-FILL-um), comes from the Greek for “foot” and “leaf,” perhaps referring to the short, strong leaf stalks. Its species name, peltatum, (pel-TAY-tum), is derived from “pelta” – a small shield – for the shape of the leaf. These plants are in the barberry family.

Birding and botanizing trips in southern Door County helped us discover a few large patches of this unmistakable plant on back roads near the Gardner Marsh. Later we found some growing along sections of Glidden Drive and more recently on a quiet back road west of Clark Lake and in the woods near Kangaroo Lake.

They tend to be found in partial sun to shady areas hidden under deciduous trees. The leaves are so large that they hide the lovely, white flower, which is found below the leaves, growing in the crotch of the two leaves. Plants normally reach a height of two to three feet. The fragrant blossoms are six- to nine-parted and range from one inch to two and a half inches wide.

The unripe, green berry, with its many seeds, is poisonous. When completely ripe, the fruit is yellow and edible but not very tasty. Few people would bother to eat these because they are so hidden and not well-known. All other parts of the plant are poisonous, including the large leaves, stalk and root.

Another local wildflower in the barberry family that can be considered “hidden” is the blue cohosh. It blooms in the spring in many woodlands but has a small, barely-half-inch-wide flower that’s green, making it difficult to see. This perennial plant can stand as tall as three feet, and the flower is above the leaves, but it blends in with the surrounding foliage.

Its leaves are easy to identify because they resemble the shape of a tulip flower. They are three-parted into leaflets, which are then divided into three, with two to five lobes. The fascinating thing about these plants is the dusty-blue fruit they produce in the fall, which is when they’re so much easier to see. We don’t know of any wild animal or bird that eats the fruit.

Barberry shrubs have been cultivated in many parts of the world. Those that grow in parts of Door County – the European barberry, Berberis vulgaris – were introduced plants that are native to Europe. These can be very invasive, taking over roadside areas and even woodlands, and the European barberry can infect wheat plants with a serious fungal stem rust that damages this important agricultural crop and related grains.

They have many spines on the shoots and branches, so years ago they were planted below windows to deter burglars. Stepping on them can be like walking on barbed wire! They were also planted as natural fences to keep livestock in fields and pastures.

Certain varieties are evergreen; others are deciduous; and many were planted because of the attractive, colorful flowers and leaves’ deep-red pigment in autumn.

Now that spring is really here, get out to explore our many natural areas and state parks to enjoy what’s growing and blooming in this season that we have long awaited.