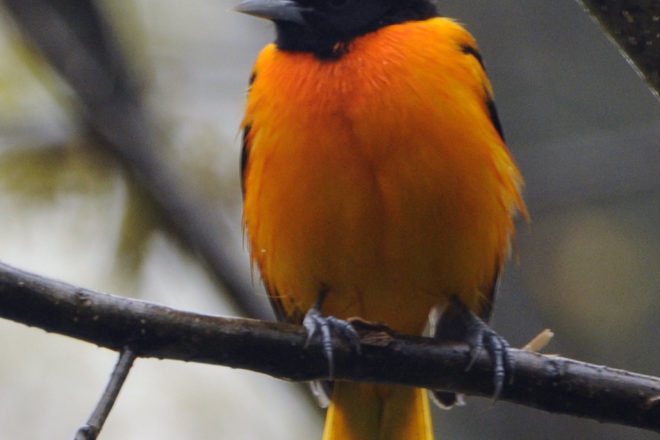 Spring truly arrived at my home on Tuesday, May 1. The high temperature reached 82 degrees briefly in the afternoon and the first Baltimore oriole arrived at my feeders. It meant that it was time to install the orange holders on the platform feeders for these gorgeous birds with the clear melodic song to enjoy these fruits.

The deeply orange feathers of mature adult orioles are easy to see and are a perfect contrast with the black on their heads. It is those mature males that usually are first to arrive, but this year it was a younger male with less intense color. The harsh April snows have made spring bird migration sort of unusual. We don’t know if some birds are just late in arriving or have already flown north and just didn’t stop.

The male Baltimore oriole doesn’t have to play second fiddle to any bird when it comes to brilliantly colored plumage. Once males get to be three or four years old, their orange plumage practically glows. Little wonder this species has become such a popular and loved bird wherever it nests. We often referred to the most radiantly colored male in the group as the “alpha” male. His upper chest is actually a somewhat reddish-orange and he dominates the feeders while there.

Look closely at the wings of your orioles. The adult males have a single white wing bar and an orange shoulder patch on black wings. Adult females and first-summer males (those hatched last year) can be quite variable but generally show two white wing bars, various amounts of orange in the underparts and black on the throat, hood or upperparts. 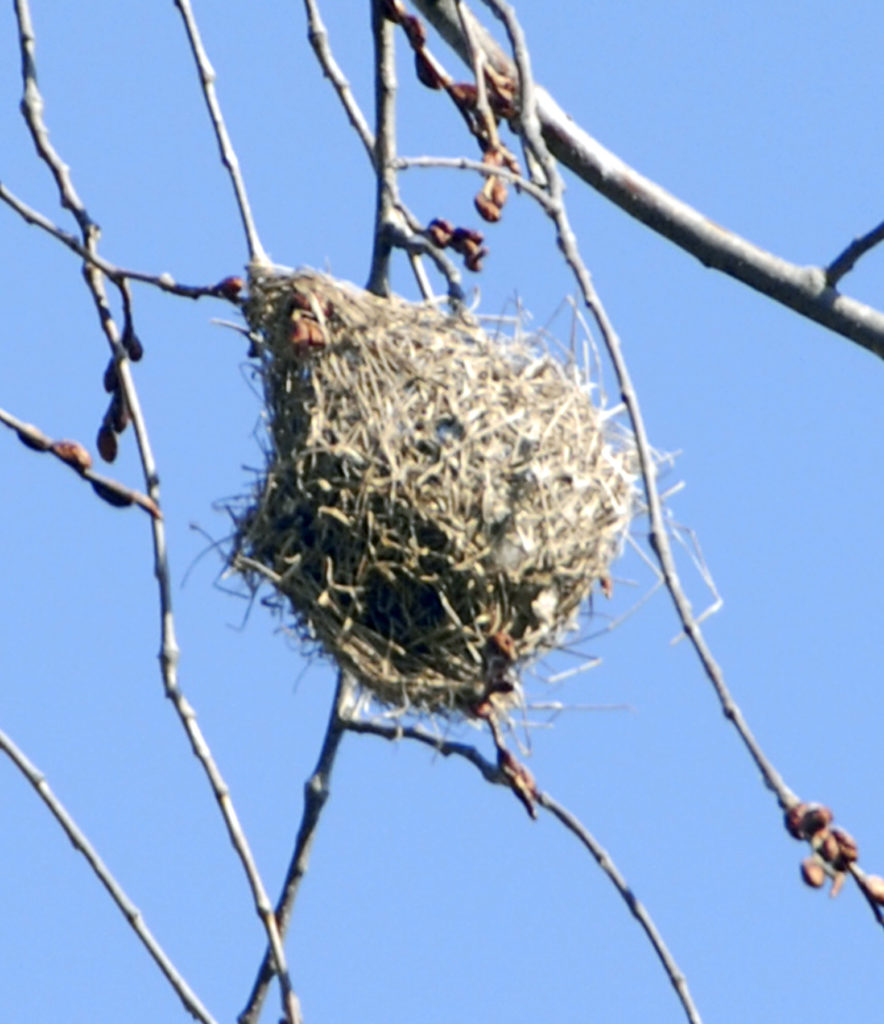 This oriole nest has been on the branch for nearly two years and still is fairly intact.

Those oriole males that you still hear singing quite vigorously this June are most likely unpaired second-year males that frequently won’t mate during their first summer. Late summer singing will also be from these unmated birds or males hatched this summer.

Few other bird species in our region can match the female oriole in nest making. Even though the male may help a little in the building, the female is the primary architect. What she lacks in color is made up for by her unbelievable weaving artistry. So well-built are the nests that it is not uncommon for one to survive the winds and storms of three or four years before finally disappearing completely. There have been times when an oriole used a nest for a second season.

Strings are suspended, usually on a drooping branch, to form the warp of the woven masterpiece. Once the framework is completed, then begins the weaving of hundreds of long fibrous strands of plant material or anything they can find resembling plant fibers, such as yarn or string. Sections of grapevine, various grasses, spreading dogbane, Indian hemp and the common milkweed seed filaments are frequently used in this area.

Nearly every nest we’ve ever seen has been gray in color. I remember Roy telling of discovering a pitch black oriole nest in a low-hanging branch of an American elm tree growing across the road from a quarter horse farm in Brown County. That particular nest was woven entirely from the long black tail and mane hairs of the brown quarter horses and was a thing, as Roy said, of “black beauty!”

Generally the nests are entered from the top. However, several oriole nests we’ve seen had what appeared to be a side opening. It could be that some of the nests being as deep as they were, this side entrance may have really served as a peephole, a window for the adult to look through while incubating the eggs.

Years ago, when Roy did environmental education classes with county school children, one of his favorite teaching props consisted of about a dozen life-size plastic bird models made from kits that were painted quite realistically. The students could handle and study them, and enrich their concepts of some of the common nesting birds, including the Baltimore oriole.

The children always enjoyed simple challenges presented to them. Roy would hold the Baltimore oriole model behind him and tell the fledgling birdwatchers that they would have 10 seconds to carefully study the bird to locate five different colors on its body. Then he quickly held the model high so all could see it. Few got this test wrong.

The colors were black, orange, yellow, white and gray (beak). Yes, some birds don’t offer you much of a look and you have to very quickly analyze body shape, size, colors, type of beak and mannerisms. 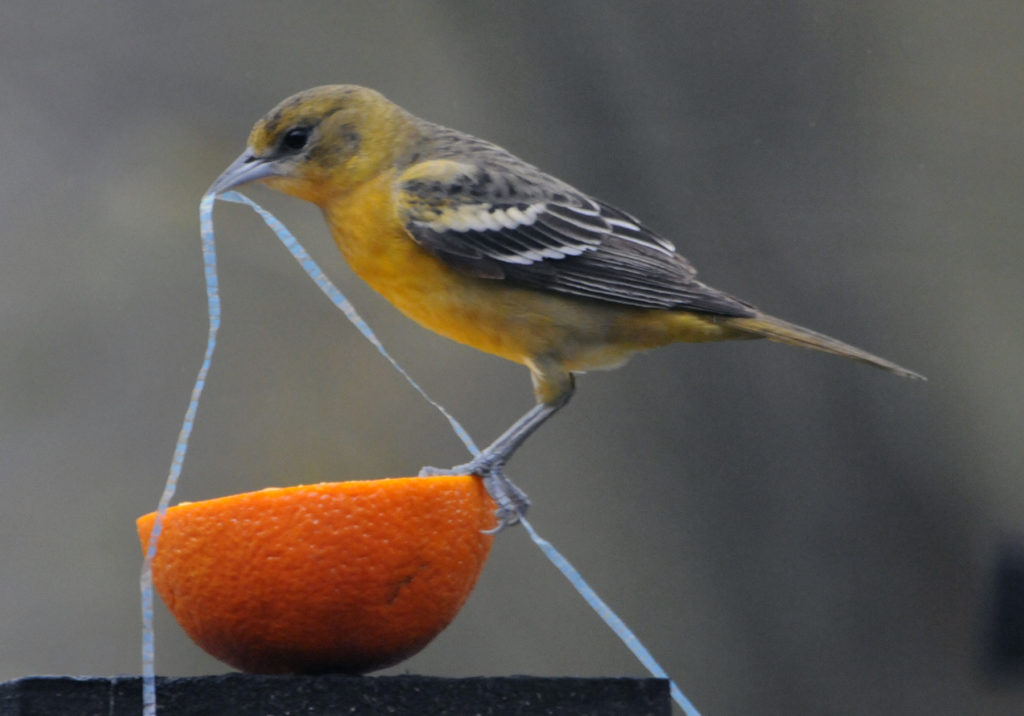 A female oriole, with a bit of nesting material, has more subdued plumage.

I remember helping Roy during the last weeks of the school year while we were living in the Ridges range light. He would set up his Japanese mist nets in the backyard between the trees to the north and the feeders closer to our kitchen windows. The elementary school children were at the front of the house with Roy and his bird banding equipment. I was stationed at the kitchen table watching the nets. As soon as a bird got caught in a net I would run up the five steps to the living room, go down the hall to the front door and tell Roy what bird was in the net. He would go around to the back yard and remove the bird from the net and bring it to show the youngsters.

It was amazing to see how intently those children watched the bird and listened to Roy’s description of each part of the creature as he turned it so all could see. The one male Baltimore oriole he caught and held up suddenly sang its rich, clear musical song. Everyone, including me, was thrilled to witness that event. Roy said he had never experienced an oriole singing while it was being held. Roy banded birds for 30 years.

It was during the period in our history when the dreadful Dutch elm disease killed nearly all of the American elm trees in much of the country, that the bird experts were feeling sorry for the Baltimore orioles. Studies indicated that nearly 85 percent of their nests were built in the elm trees.

Fortunately, the Baltimore oriole is a very adaptable bird, and appeared to suffer very little in having to use other tree species for their nest sites; trees such as cottonwood and silver maples. Nests have also been found in quaking aspens and one was found about eight feet above the ground in an apple tree, right in front of a living room window.

The male birds arrive several days before the females and are quite silent during this time. Once the females arrive then the singing begins. Get out and place orange halves in a secure spot on your feeders and enjoy the clear musical songs of the colorful Baltimore orioles.

Charlotte Lukes will present a slide presentation titled “Door County Birds and Wildflowers” May 27, 1:30 pm at Newport State Park’s Nature Center. The program is free but a vehicle sticker is required for entry.