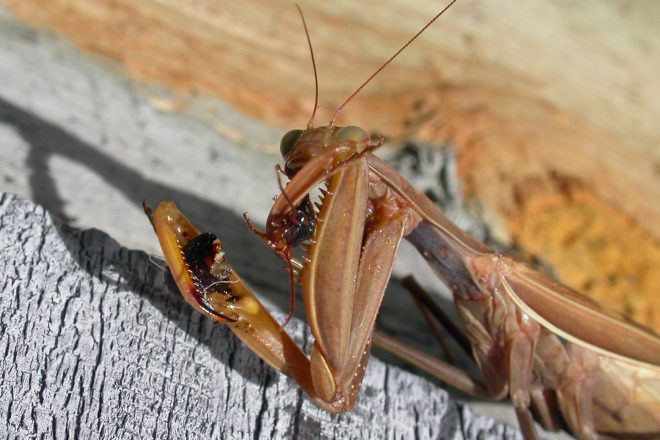 This mantis has chewed an insect in half with its strong jaws. Photo by Roy Lukes.

A recent walk with a good friend revealed a surprise that we nearly stepped on. It was a green praying mantis feasting on a grasshopper. These fascinating creatures – avid insect predators – can blend in with their surroundings very well.

We saw more mantids years ago when we had a vegetable garden, and the females laid egg masses on the garden shed. The egg case is soft and sticky soon after being deposited. Then it hardens and survives the winter, and tiny praying mantis youngsters emerge in the spring. Once developed, they sometimes begin to eat each other, and the female occasionally eats the male after mating!

There are an estimated 2,400 species of praying mantises in the world, with most living in the tropics. They are known as ambush predators and account for 29 families in the Mantodea order of insects.

Only one species of mantid is native to the United States: the Carolina praying mantis. A European species was imported to the Rochester, New York, region more than a hundred years ago, and the larger Chinese mantid was brought into Philadelphia about 80 years ago.

Some people thought they would be good controllers of unwanted insects in their gardens; however, mantids are not quite that discerning and eat the beneficial insects as well as the harmful ones. The method of these very slow-moving creatures is to sit and wait for a meal to come within reach. Then they move their front legs with amazing speed to grasp the insect. There is a YouTube video filmed in 2004 showing a mantis catching a hummingbird at a hummingbird feeder.

The European mantid has a black-ringed white spot on the inside of both its fore coxae (COK-see), the parts of the front legs nearest the throat. These legs are heavily armored with spines and teeth, and they can move with great speed to grab prey.

We’ve seen praying mantises range in colors from brown to green. Studies were done to determine how the color affects the insect. Some even thought mantids could change their color at will, but it was never proven.

The brown color was seen during hot, sunny summer months in areas where the ground color was brown. The green forms were encountered in cooler areas where the vegetation was more prolific and green. It seemed that the praying mantis’s color was a particular form of camouflage in the environment where it lived.

We found a gravid female (heavy with eggs) that measured three inches long. Chinese mantids can reach a length of six inches, although four is the average.

They have two compound eyes but only one ear, which is located on the belly and has sonar capabilities. When the mantis is in flight, it can sense a bat flying in the vicinity and does a steep dive to avoid becoming the bat’s prey. There are also some flightless mantids, and they do not have an ear.

The head of the mantis is triangular and can move in a 180-degree arc. Its very strong mouthparts can bite through the quite hard, plastic-like, chitinous (KY-tin-us) exoskeletons of insects such as beetles and wasps.

The long middle and hind legs give the praying mantis the ability to remain motionless for many minutes at a time. Its front legs stay “raised in prayer” as it patiently waits for the next meal to crawl by or land near it. (It’s a praying mantis as well as a preying mantis!) This posture may be the reason it was given the scientific name Mantis religiosa.

What a fascinating creature to study closely, watching it slowly turn its head to follow your every movement as though it was thoroughly captivated. I wonder whether this is the only insect that’s able to look over its shoulder the way a human can.

We enjoyed capturing a praying mantis in our front yard and let it walk along my arm and up onto my shoulder and head in search of anything to eat. It tickled a bit as it traveled on my bare skin.

If you come upon one this month, try to capture it for a short time to watch its actions. We often compared the movements of this insect to the wonderful movie alien ET – the head shape is very similar.

Take time to explore your yard and gardens as you begin the fall cleanup and “pray” that you will find a praying mantis before the freezing weather removes them from the landscape.