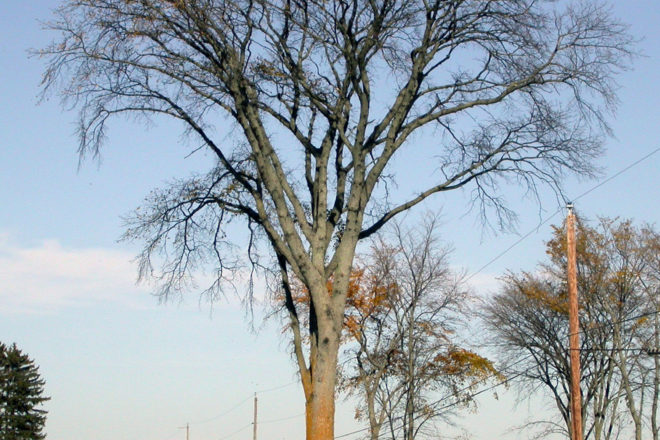 This native American elm stands 80 feet tall and displays the vase-like shape of the straight trunk and flaring crown. Photos by Roy Lukes.

I grew up in Milwaukee and remember our shaded residential street lined with tall, graceful American elms. Their wide crowns met and arched high above the avenue, giving it the look of a gothic cathedral ceiling. Then the dreaded Dutch elm disease struck, and the trees were cut down, leaving stark, bare, bright, sunny pavement and sidewalks. The disease that invaded these magnificent trees is caused by a fungus that is carried into the tree under the bark by a beetle. A similar situation is striking our American beech trees in the Upper Midwest: a fungus enabled by a tiny insect.

But please don’t blame the terrible tragedy on the Dutch people! The name comes from the Dutch scientists who discovered and described this elm-threatening ailment in 1921. The tree disease was first found in America in 1930 and was thought to have entered the country via elm logs imported from Europe for the manufacture of veneer in the plywood industry.

Ironically, it was unlawful to import boards into the United States but perfectly legal to bring in logs containing the bark, fungus disease and European elm bark beetle that was the culprit. The beetle emerged the following spring, spreading the microscopic fungus spores to healthy, native elms in this country.

Adult beetles bore into the bark of elms and deposit eggs. The larvae hatch and begin feeding on the nutrient-rich cambium just under the bark. The fungus carried by the insects forms in the xylem of the tree and is spread by microscopic spores as well as by the beetles chewing tunnels in the tree. The growth of the fungus in elm trees, especially beneath the bark, clogs the vascular system of the living tree and prevents the passage of water and dissolved minerals.

In addition, the devastating disease is spread underground from tree to tree by root grafts. My late husband Roy and I often admired solitary American elms that grew in Door County’s open countrysides. He felt that these trees remained long after most of the other elms were dead perhaps because of their isolation from infected trees.

The graceful, vase-shaped elms were by no means familiar to many people during the early development of this country because the native preferred habitat of these trees is swampland or other low ground. The great size and unusually attractive shape made them a favorite avenue tree, and soon city after city was lining thousands of miles of streets with these impressive trees. They were fast-growing and soon towered above power poles.
Other factors in their popularity were that, as “weed” trees, they were cheap, readily available and thrived in practically any soil into which they were planted, despite their preference for swampland or other low ground. These vast monoculture landscapes were asking for trouble, and, like the fate that befell the American chestnut tree, that trouble came and dealt a blow that cost most cities millions of dollars. Of the estimated 77 million elms in North America in 1930, more than 75 percent were gone by 1989.

It does little good to dwell upon the great expense incurred by these cities in removing the dead elms, followed by the desolate, empty streets in summer. The tree-planting programs of many cities were wisely altered to include a wider variety of trees, thereby eliminating the expensive shock of a widespread and devastating disease killing off a single variety. It is disturbing that some northeastern Wisconsin cities have planted far too many sugar maples, regardless of how beautiful they are.

Canadian foresters have worked hard to control Dutch elm disease. Alberta and British Columbia are the only provinces currently free of the disease. Edmonton and Calgary in Alberta still have parks and streets lined with healthy, mature elms. The two cities ban the pruning of the trees from March 31 to Oct. 1 each year to deter fresh cuts, which attract the beetles and fungus.

In America after the Second World War, DDT was used to spray the trees and deter the infection. However, the pesticide killed too many birds, such as the American robin, American woodcock, white-breasted nuthatch and brown creeper. Many of you may remember reading Rachel Carson’s book Silent Spring, telling of this wildlife disaster.

Studies to develop disease-resistant elms in the United States involved hybrids of the Siberian elm, Ulmus pumila; and the American red elm, Ulmus rubra. One factor to consider is a warning from the Morton Arboretum that the Siberian elm, also known as the Chinese elm or the Korean elm, tends to have invasive properties. It is also highly susceptible to ice damage and has a weak wood and branch structure.

The Morton Arboretum website lists about 17 species of elm cultivars  that were developed to be resistant to Dutch elm disease. I learned from a tree specialist about the American liberty elm, Ulmus americana “libertas”: the first disease-resistant American elm with a pedigree and a warranty against Dutch elm disease. They have the tall, vase-like features of the original elm, but their smaller cell structure makes it impossible for the infection to enter the tree. It is always a good idea to plant native trees and shrubs rather than non-native species, which might become noxious, invasive pests in the future.

Roy enjoyed trees so much that he taught a Clearing-in-Winter class on finding and measuring Door County’s biggest trees. He and his students traveled to many parts of the county to record and photograph these gigantic beauties.

Two of them are outstanding American elms that tower above the surrounding landscape. One is on Brauer Road, and another is on private land near the Ahnapee Trail. Both trees are about 80 feet tall and have crown spreads ranging from 70 to 92 feet wide.

Few other trees in the history of our country have become as well recognized and admired as the American elm. Pause for a moment to pay your respect to the next live American elm you see, and hope that you’re looking at an unusual disease-resistant strain that just may be responsible for safely spreading these gorgeous trees once again in many parts of our land.