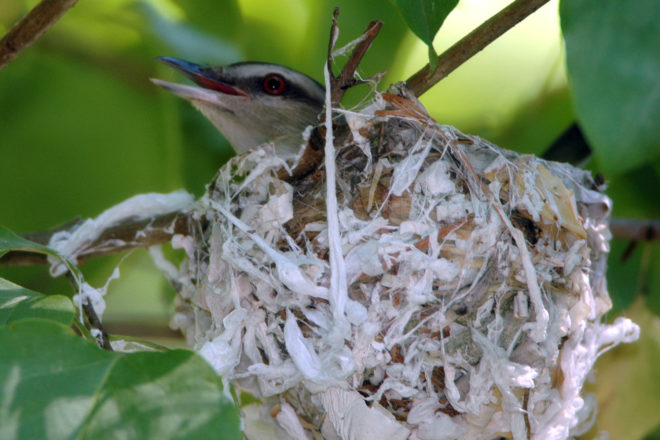 A red-eyed vireo sits in its birch bark and paper coated nest about ten feet up in a small tree. Photos by Roy Lukes.

There is a bird whose unusual persistence at singing is only outdone by its exquisite and wonderful nest building. If more people would learn its repetitive song and nesting area, this very well could be one of the best known birds of eastern North America. Unfortunately there are only a relatively small number of birdwatchers who have actually watched the red-eyed vireo sing.

Wilson Flagg, writing in 1881 about the red-eyed vireo in his book, A Year With the Birds, said, “His style of preaching is not declamation. Though constantly talking, he takes the part of a deliberative orator, who explains his subject in a few words and then makes a pause for his hearers to reflect upon it.

“We might suppose him to be repeating moderately, with a pause between each sentence, ‘you see it,…you know it,…do you hear me,…do your believe it?’ All these strains are delivered with a rising inflection at the close, and with a pause, as if waiting for an answer.”

This five-inch-long creature makes up for its easy to hear, neverending vocalizing by being downright maddening to locate in the treetops by birdwatchers. A dark olive back and white underparts make this bird blend in perfectly with tree and shrub foliage. Consequently the red-eyed vireo that flitted into plain view of our birdwatching group recently and sang repeatedly brought great joy to our hearts. In fact this was a first for most of the group.

There are 13 species of vireos in North America. All resemble the red-eyed in silhouette and in behavior, but differ in such field marks as eye-rings, wing bars, whisker marks and the color of their heads and underparts. Most are found in the western and southern parts of the country.

Seven species breed in Wisconsin, with the red-eyed being the most common. The warbling vireo is the next most abundant, generally in the southern two-thirds of the state. The yellow-throated is also statewide but more common in western Wisconsin. Bell’s vireo is the next most common and mainly in the southwestern sections of Wisconsin. The less-common species are the white-eyed in southern Wisconsin, blue-headed in the far north, and Philadelphia in the far northwestern part of the state.

A Canadian ornithologist, Louise de Kiriline Lawrence, studied one red-eyed vireo for an entire day and learned that it sang 22,197 songs during that time! What an endless sermon. Little wonder some call it the preacher bird.

Assuming that southern Canada might have 20 hours of daylight in June, that would amount to about 16 or 17 songs per minute. What vocal power! 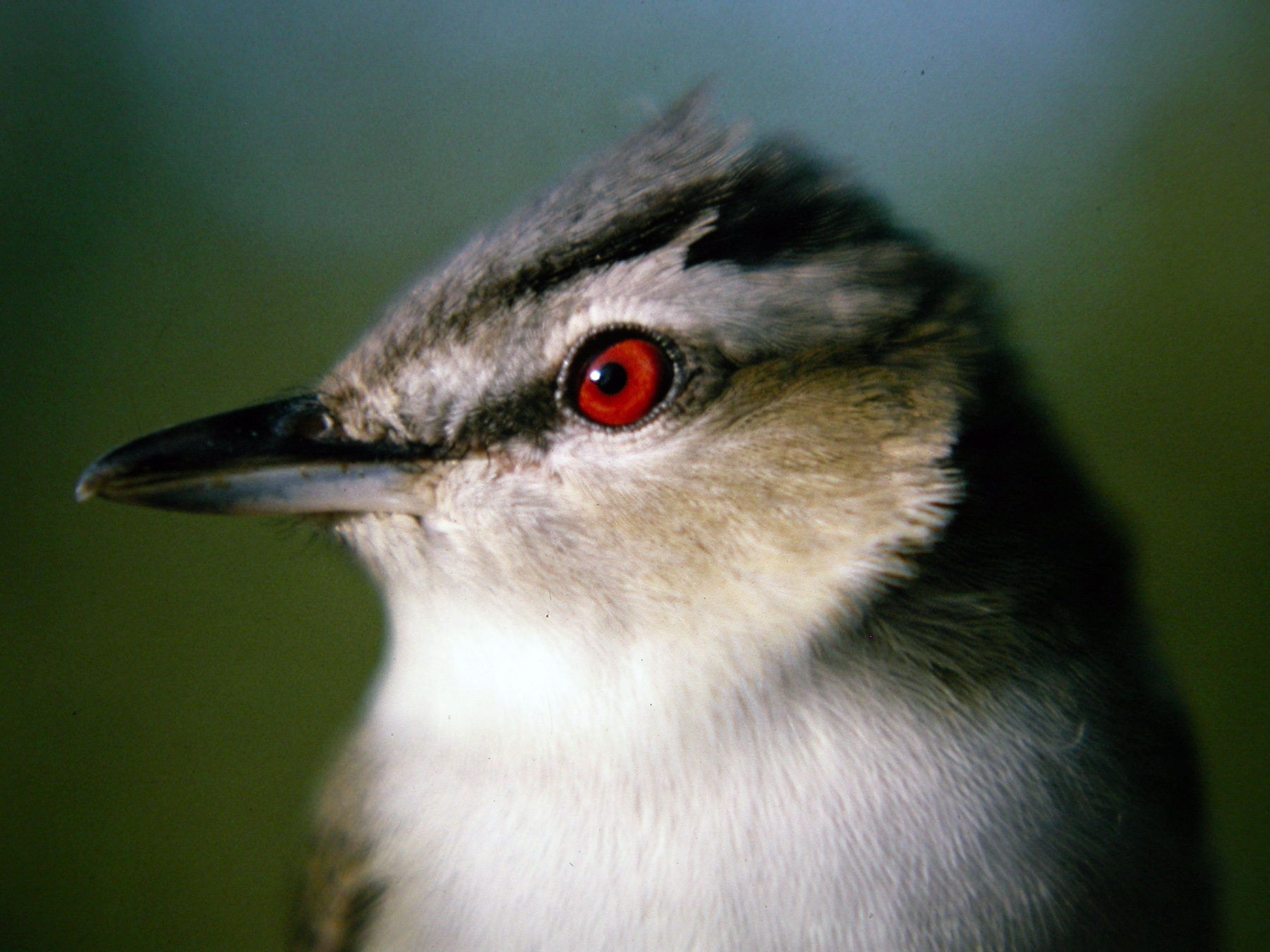 The red-eyed part of its name comes from its rusty red iris, which can be detected only from fairly close range and in good light conditions. Its dark grayish crown is set off by a white line over the eye and there are no wing bars. A close look will reveal a rather heavy bill very slightly hooked. In fact, the bird is considered to be a relative to the larger loggerhead shrike that has a distinct hooked beak.

Hearing the bird sing you immediately think that the name vireo is related to its song. In reality its Latin derivation means “to be green.” The common names of very few birds are the same as their scientific names such as the vireo. The “red-eye’s” name is Vireo olivaceus.

Its song would be a perfect example of an allegro – meaning brisk – movement in a symphony. It is a choppy, high-pitched, rapid roundelay sung in clear tones. Exactly what this incessant musician is trying to say is hard to understand. Perhaps it is constantly broadcasting its territorial claims, strengthening a pair-bond, releasing nervous energy, communicating with its mate on the nest or just plain practicing. Come to think of it, he may simply love to sing!

Their pendulous nest, from five to fifteen feet above the ground, is skillfully constructed from dried grasses, fibers from vines and other plants, bits of paper, mosses, lichens, leaves and even bits of paper from wasps’ nests. Fine plant materials, white pine needles or even hair line this exquisite masterpiece.

All of the red-eyed vireo nests I’ve examined from northeastern Wisconsin contained tiny shreds of paper birch bark usually dangling from the sides and bottom. Firming the entire nest together is done with spider web silk and the tacky spider egg “cocoons.”

The clutch contains three to four white eggs, marked at the wider end with brownish black dots or spots. They are incubated mostly by the female for 12 to 14 days. Occasionally there may be two broods in a summer nesting period.

Few nests on the entire continent are parasitized as much by the brown-headed cowbirds as those of the red-eyed vireos. It is a fairly common sight to see the diminutive vireo adults feeding one or more young cowbirds that are about twice the size of the parents. One study of 114 nests revealed that 87 had been parasitized by cowbirds, about 75 percent.

These indefatigable singers also spend many hours devouring great quantities of injurious insects, especially spanworms and leaf rollers. Several types of fruits, such as dogwood and Virginia creeper, are consumed along with scores of caterpillars, moth, flies, beetles and spiders by the red-eyed vireos.

One joy that Roy and I had was watching the vireo use the bird bath. They would perch in a nearby bush and then fly through the water. This was repeated several times and we called it “fly-bathing.” Rarely would they actually sit in the bath and splash in the water like most birds do.

Our lives have been made richer by the treasured concerts and rare sightings of the trustful red-eyed vireos. These little minstrels of the treetops, the birds that outlast nearly all other birds in the singing department, have stressed once more how valuable birds are to nature as well as people.