The narrow country lane leading to my driveway has frequently had a brown thrasher flying across it as I drive by. This is an open area with scattered shrubs and small trees and the bird is soon out of sight, perhaps at its nest. It is perfect habitat for the long-tailed, cinnamon-colored songster.

I remember my first days going on the Ridges Sanctuary’s early morning bird trips and hearing a brown thrasher singing. They breed throughout eastern America and are permanent residents in the south. Brushy fields, woodland edges, thickets and hedgerows are their favorite habitat.

They build their nest either on the ground under a small shrub or as high as 10 to 15 feet up in a tree, bush or vine. It is made of twigs, grass, dead leaves, grape vines and lined with fine grass and rootlets. Both sexes build it, taking about five to seven days.

They prefer deciduous areas rather than dense conifer habitats. The clutch is usually four to five eggs and both male and female take turns incubating them. Eggs are pale bluish-white or sometimes with a greenish tinge and often covered with small reddish-brown spots. It takes 12 to 13 days of incubation before they hatch and then the chicks grow in the nest for another 9 to 12 days before fledging.

The thrasher’s diet consists of insects, spiders, small snakes, lizards, tree frogs, berries, fruits and nuts. We’ve enjoyed watching one at the edge of our woods sweeping its bill sideways through the dried leaves looking for hidden snacks. In fact that’s how it got its name; by thrashing through layers of leaves as it hunts.

Years ago a pair of thrashers, whose nest location we knew about, taught us a good lesson of how they keep their nest clean. One of the adults flew from a scrubby patch of sumac about 200 feet to the nest situated close to ground level at the base of a little cluster of small trees. 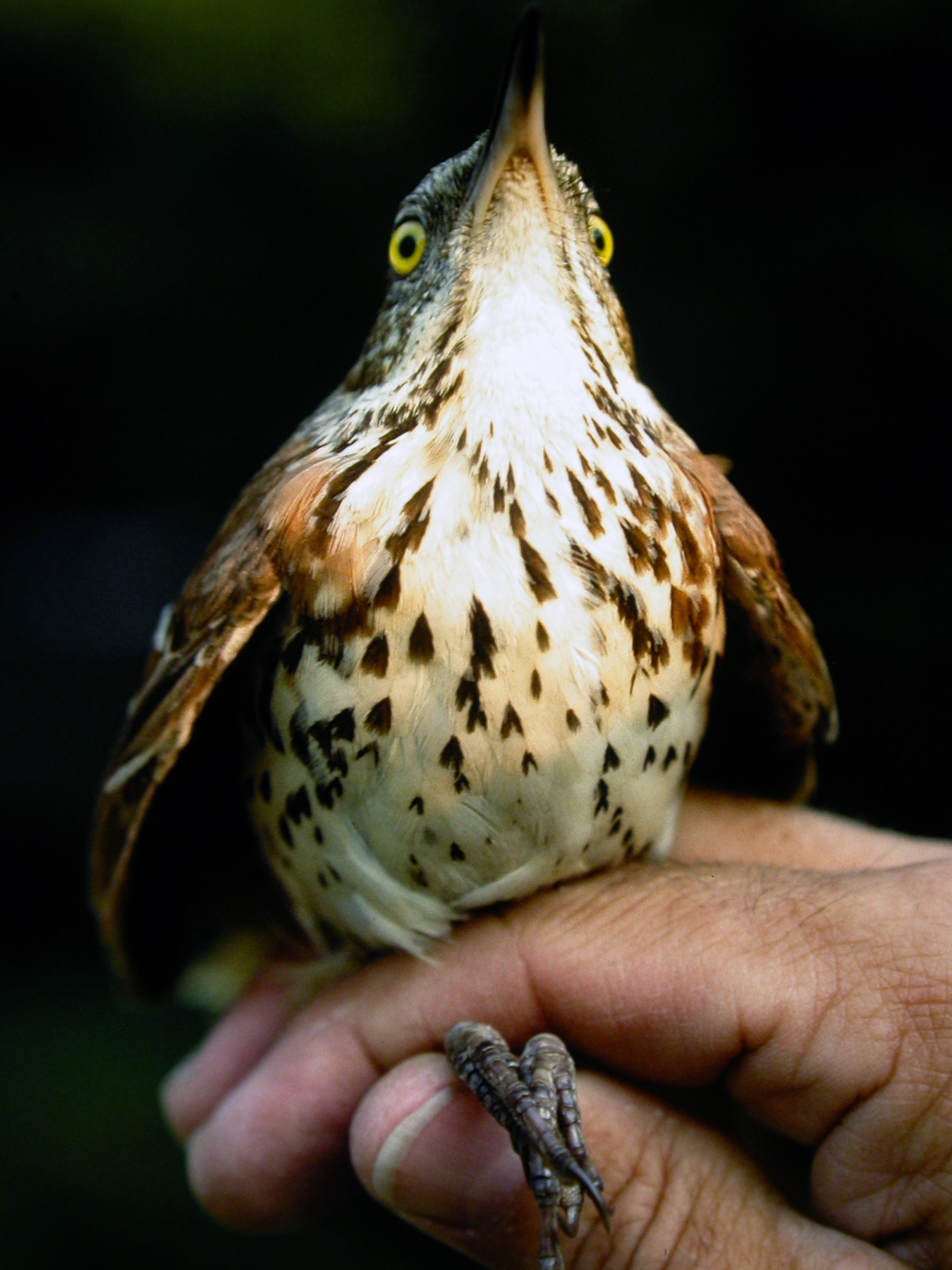 Roy banded this thrasher and a front view shows how the eyes are placed well for it to search on the ground for food. Photos by Roy Lukes.

Within several seconds this adult had fed one or more of the young, reached down into the nest to retrieve a fecal sac, flown back toward the same sumacs and dropped the white sac along the way. Perhaps you could compare fecal sacs to disposable diapers. The droppings of most baby birds are contained in a very thin but durable membranous pouch called a fecal sac. This enables an adult to quickly remove each entire bag, thereby maintaining a very clean nest. Bluebirds and many other species do the same thing.

You can easily imagine what a terribly messy nest birds would have without this highly efficient method of sanitation. When I lived in the Ridges Range Lighthouse I remember seeing a common grackle carrying a fecal sac and dumping it out in Lake Michigan.

If I were to pick our leading country-singer bird of daytime hours it would be the brown thrasher. It is in the collection of birds called mimics. Included in this group are the gray catbird and the northern mockingbird. One easy way to distinguish which bird you are hearing is this clue:  catbirds repeat a phrase once, brown thrashers twice and mockingbirds three or more times.

There are seven other species of thrashers in the United States but the brown thrasher is the only one that lives and breeds in the eastern part. Georgia chose it as their state bird. However, these 9- to 11-inch-long vocalists pour forth with their fantastic repertoire just as energetically in southern Canada. It wouldn’t surprise me to hear the northern singers performing with a slightly different regional selection of tunes. They hold true to their mimic heritage.

Don’t expect to see these inhabiting manicured yards. If a pair does nest in a bush or small thick evergreen tree on a mown lawn you can be assured that the birds are not very far from a thicket, unkempt fencerow or a woodland border. They are essentially country birds at heart.

One of its most outstanding characteristics is its lengthy expressive, bright rusty-colored tail. Its bill is quite long, stout and slightly down-curved, but not as much as some of the western thrashers. We have watched them many times in our yard, especially in late spring, as they aggressively thrashed their head back and forth scattering the dead leaves with their beak, the process thereby revealing many insect forms which they promptly devoured.

Our looks at the brown thrasher are usually very brief, frequently no more than a few seconds. Occasionally, if we are lucky, a male will perch on the tip of a tree, such as an arbor vitae, and serenade us for several minutes at a time. With head held high, bill open and tail drooping downward the 11-inch-long bird appears to channel much energy into its production.

People have had a lot of fun for years trying to put words to the brown thrasher’s incredible song. The best I have ever read was mentioned in Life Histories of North American Nuthatches, Wrens, Thrashers and their Allies by Arthur Cleveland Bent, published many years ago by Dover Publications, New York.

The phonetic analysis was written in 1929 by Mrs. H.P. Cook “as one end of a telephone conversation, like this: Hello, hello, Yes, yes, Who is this? who is this? Well, well, well, I should say, I should say, How’s that? How’s that? I don’t know, I don’t know, What did you say? What did you say? Certainly, certainly, Well, well, well, Not that I know of, not that I know of, Tomorrow? tomorrow? I guess so, I guess so, All right, all right, Goodbye, goodbye.”

The brown thrasher is one of the easiest birds to identify once you have seen one long enough to notice its plumage and long tail. The head, back and tail are a dazzling light cinnamon color and its whitish underparts are streaked with dark brown. Most captivating about the thrasher, in addition to its song, is the fierce, determined look in its flashy, piercing yellow eyes. It always looks very serious, as though it really means business.

I remember Roy saying during my early years of learning about birds that if a brown thrasher is seen singing in the same area all summer it may mean that it never found a mate. Unlike its somewhat more trusting mimic relatives, the catbird and the mockingbird, the thrasher appears to be very shy and vanishes at the slightest noise or disturbance.

I hope you have a thrasher in your neighborhood and can enjoy its rollicking song. If not, maybe a catbird will do!