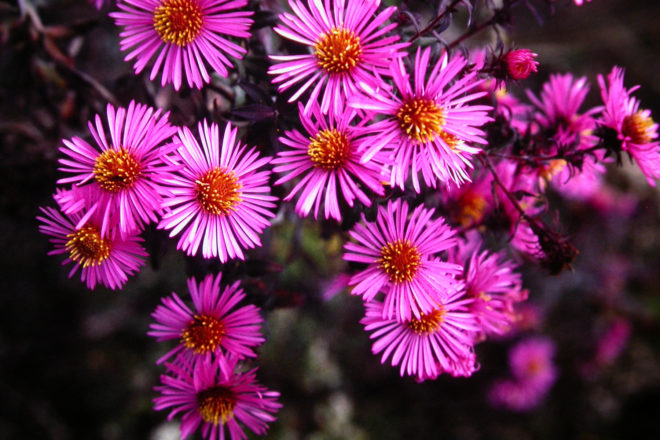 The New England aster can appear in several color forms, such as deep pink. Photos by Roy Lukes.

Autumn is my favorite time of year; not only for the mushrooms but for the fields of colorful fall flowers. Soon the roadsides will be decorated with a favorite of many, the New England aster.

I had, at one time, planned on writing a mushroom book for Door County. Now the entire world of mushrooms is going through many changes in taxonomy with certain species being renamed and moved into different families. All of this is due to the scientific work of DNA analysis which began back in the 1990s and will go on for many years.

The same thing is happening in the plant world. The family of asters, Asteraceae, once had nearly 600 species. Now there are merely about 180, with all but one found only in Eurasia (Europe and Asia). A new tribe has been named Astereae.

The old familiar asters have been regrouped into 10 new genera. The New England and the calico are in the new genus Symphyotrichum. The very common large-leaved aster, found in much of the northeastern U.S., is now Eurybia macrophylla. 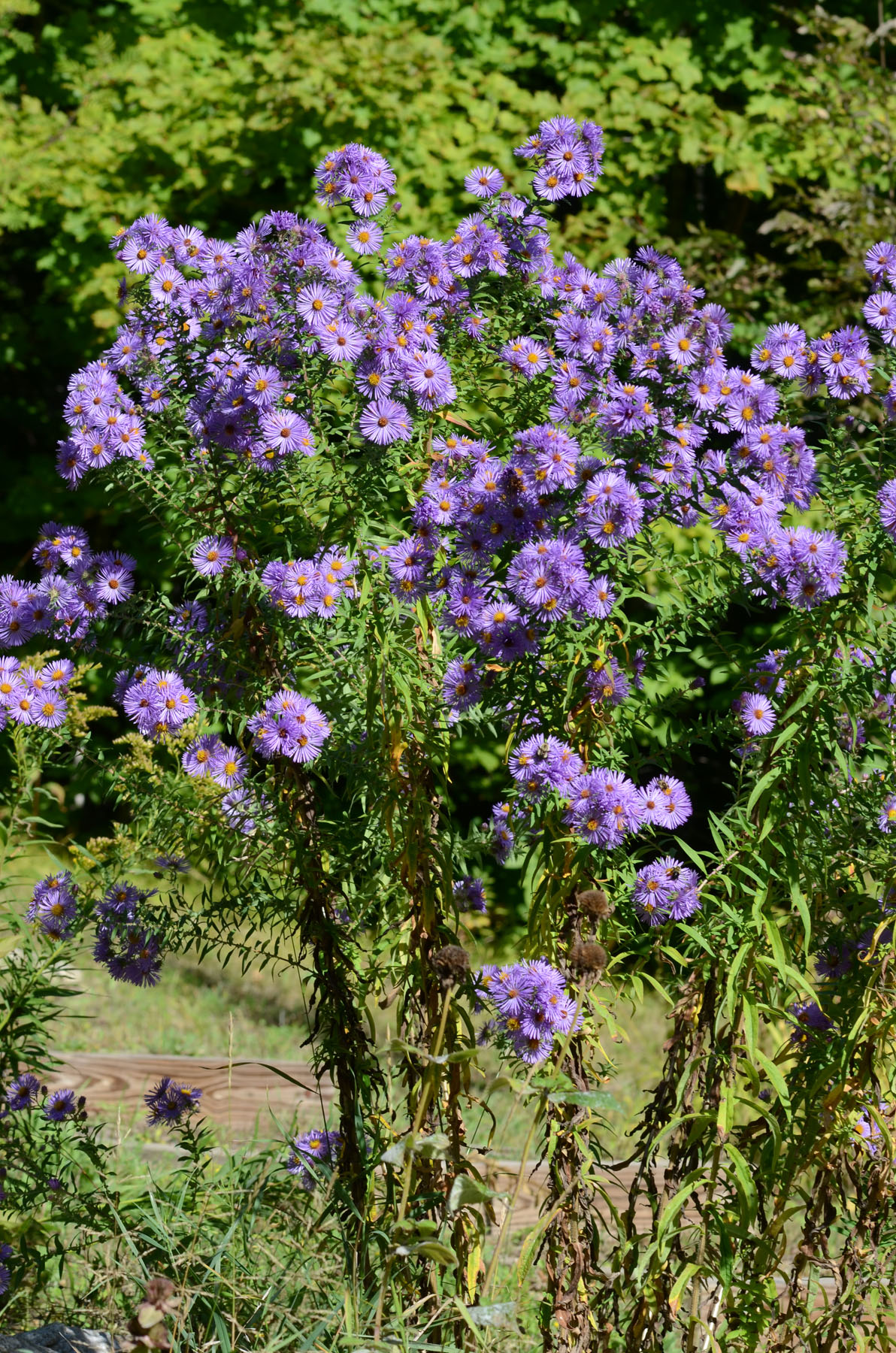 Here is the purple form of New England aster.

Regardless of all the “behind-the-scenes” scientific name changes, they can still be called asters. The Greek meaning of the term is “star,” probably determined by just looking at the shape of the blossom. Legend indicates that this wildflower was the chosen plant of John and Priscilla Alden of early New England days.

The great varieties of asters can be found in so many different habitats ranging from wetlands to prairies, deciduous to evergreen woodlands and from practically desert environments to the cold wet bogs.

These conspicuous widespread plants are largely perennials ranging in color from white to blue, lavender, pink, purple and a host of intermediate shades. Unfortunately the color of some species is not uniform and may vary, for example, from lavender to white making for difficult identification.

Upon examining a blossom one finds that it is made up of thin, outer, strap-shaped ray flowers (petals) and a closely packed central cluster of disc flowers. So, in reality, what is referred to as one flower is actually many individual flowers. Pick an aster blossom, pull it apart down the center and you can easily see the individual parts. A magnifying lens will help you considerably.

Each ray flower consists of what is normally called a petal. Attached to the inner end and angled upward is a small Y-shaped stigma. Fastened to the inner end of the ray flower (which is a pistillate flower) but angled downward is the ovary which, when fertilized, will produce a fruit (usually erroneously referred to as a seed).

Fastened to the upper tip of the ovary is the pappus, a cluster of tiny hairs or bristles that takes the place of the calyx (or group of sepals) in individual flowers and eventually serves as a parachute to carry the ripened fruit to a new location.

The central part of the flower, the cluster of staminate disc flowers, is usually yellow at first but turns to red as the flower ages. Each tubular disc flower contains a thin Y-shaped stamen. Nectar is found in the tubes and can be reached by long-tongued insects such as bumblebees and butterflies. A small number of animals including the ruffed grouse, tree sparrow, cottontail and even white-tailed deer are known to occasionally make use of the “seed” heads of aster as food.

An aster blossom is quite attractive when seen from the side. Thin pointed bracts overlap in several circles and form what appears as a long tapered green receptacle from which the blossom grows. Outer bracts are shorter than the inner ones. Collectively they make up what is called the involucre (in-vo-LEW-ker) of the blossom.

Not only are these popular wildflowers highly variable, they are also known to cross with other wild species. One has to dissect the disc of an individual flower and then use a good hand lens and ruler to examine and measure parts of the disc flowers for accurate identification. I have been quite content to simply refer to some of them as white, blue, pink or purple asters, with my primary concern being to enjoy the exquisite color combinations of these blossoms to their fullest. 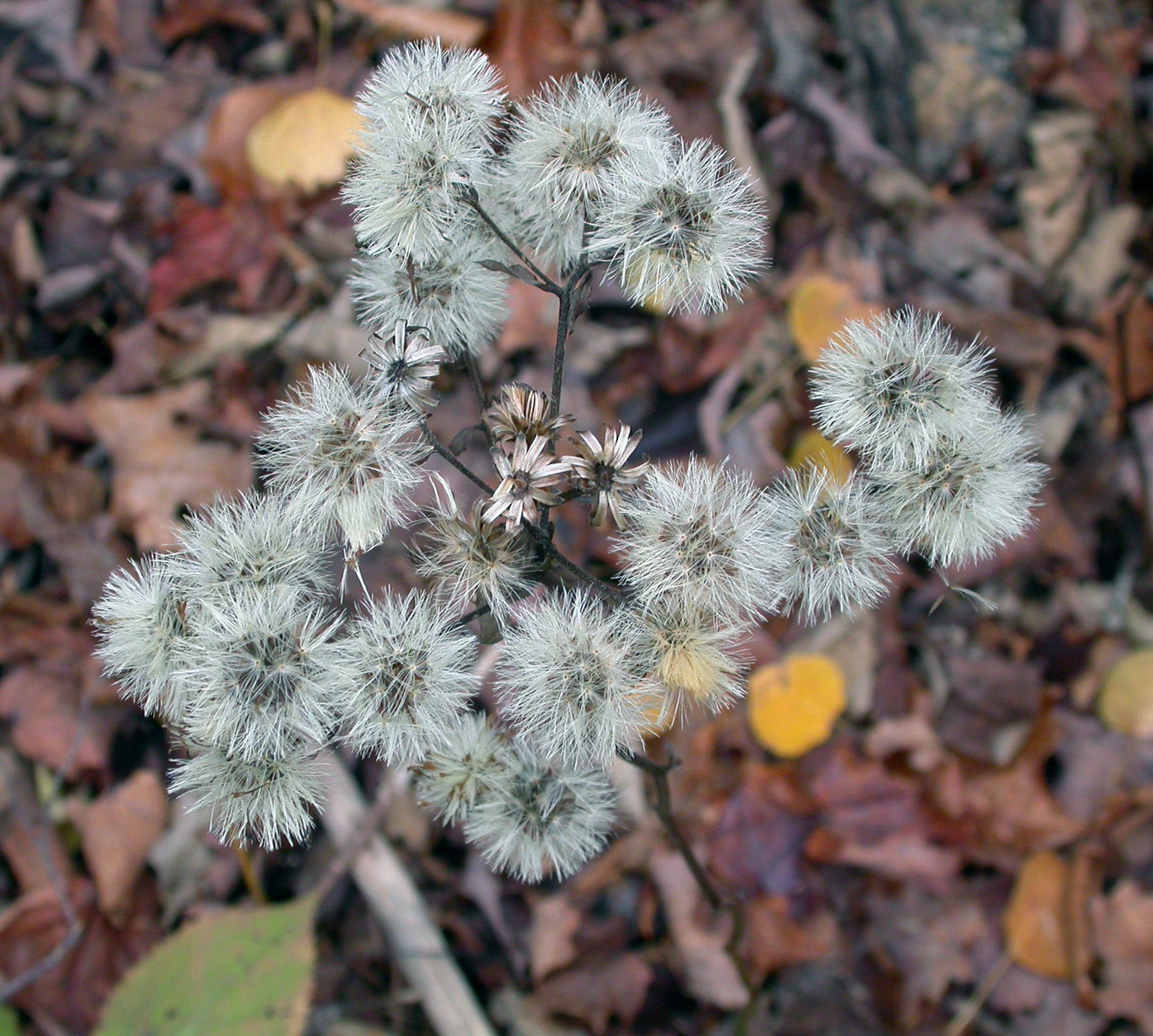 The “seed” heads of an aster are ready to be blown away with the next strong wind.

Trivial characteristics coupled with frequent hybridization tend to make certain groups of asters extremely difficult for even expert botanists to identify. Harold William Rickett, in his superb book (set of two) Wildflowers of the United States: The Northeastern States, wrote, “ … this is no genus (aster) for the amateur except he be unusually ambitious and painstaking.” However, don’t let this statement discourage you before you’ve even begun. Be contented to know three or four species and love the entire family!

Several easily seen characteristics will help you to learn some of the asters. Your knowledge of plants in general will improve as you study things such as leaf size and shape, the margins of the leaves, whether the leaves clasp the stem, size of the flower heads and color of ray flowers and stem.

How strange that one of America’s most beautiful wildflowers and one of my top favorites, the New England aster, formerly called Aster novae-angliae (now named Symphyotrichum novae-angliae), is relatively rare in New England. We have enjoyed many concentrations of them throughout northeastern Wisconsin. Here is a genuine native wildflower which, through good publicity and a lot of help from area plant growers and greenhouse owners, could be propagated in great numbers and planted widely. These hardy perennials add great color and beauty to the autumn landscape.

I know why Roy especially enjoyed them when they bloomed next to the tall, brilliant yellow goldenrods. Purple and gold are his Kewaunee High School colors! Several other favorites of ours were the red-stemmed aster, bog aster and the calico aster.

Constellation after constellation of asters await your discovery and enjoyment, and for each new species you positively identify you can award yourself with a star!