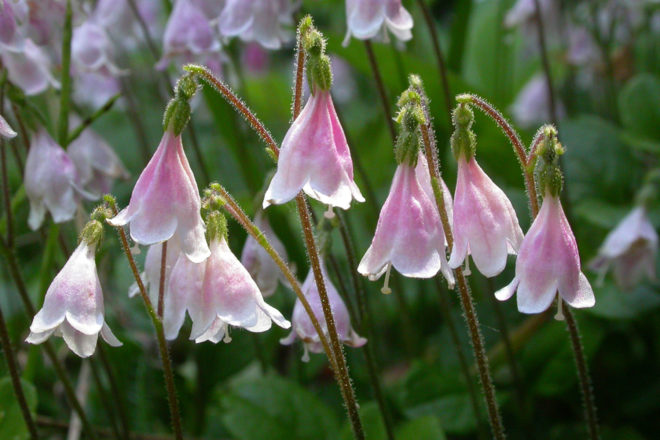 There are many plants in The Ridges Sanctuary in Baileys Harbor that are boreal, which means they grow in the world’s far-northern conifer forests. This fabulous sanctuary contains many of these flowers because the winds blowing in from Lake Michigan bathe the land with cool moisture, creating almost a subarctic climate.

Among these flowers is a very short, creeping, broadleaf shrublet with such highly perfumed flowers that, with the wind in its favor, can be detected and enjoyed from 25 feet away. This is the marvelous sensation that comes when you’re near twinflowers – one of our favorite plants.

Its Latin name is Linnaea borealis, in honor of the great Swedish botanist Carolus Linnaeus (1707-78), who was more commonly known in the early days as Carl von Linné. He eventually came to be hailed as the father of botanists, and “Pliny of the North” is now known as Carl Linnaeus.

The system of naming, ranking and classifying organisms – or systematic biological classification – that he devised is still in use today, though with plenty of changes. What’s so great about this manner of classification is that scientists worldwide, regardless of their language, can communicate accurately about specific species simply by using their universal Latin name.

The delicate, fragrant twinflowers bloom by the middle of June on primarily moss-covered ground, along with a few species of club mosses, Canada mayflowers and Canada dogwood. The evergreen plants, growing up from trailing woody stems, have slender, three-inch, flowering stalks that each support two pink, nodding, bell-shaped flowers.

Many years ago, this plant was called deer vine because of its characteristic of trailing along the ground. The petite blossoms have been described as dangling like little lanterns on Y-shaped lampposts.

What makes this greatly admired wildflower so special is that it is worldwide in distribution, found in the northern boreal forests of Russia, Finland and Scandinavia, as well as the extreme northern reaches of the Midwest and into Canada.

The downward-hanging flowers protect the plant from rain disturbance, and the fine hairs inside each bell-shaped blossom discourage tiny pilfering insects. The fragrance and color attract small bees that pollinate the plants, and narrow, pink lines guide the bees to the nectaries.

Unless you get really close, you won’t notice that the thin stalk is covered with extremely fine hairs tipped with a sticky glob of glue-like material. These sticky hairs probably also deter unwelcome insects from invading the flowers to steal pollen.

The twinflower possessed what Carl Linnaeus perceived as some of his own qualities: “lowly, insignificant and flowering for a brief space.” Yet this precious, fragrant little wildflower serves as a monument to the man of flowers and plants. It was also a favorite that appeared on his family’s china and as part of his family’s crest.

Carl von Linné, being the great teacher that he was and so deeply into Latin naming, invented the name Linnaeus (pronounced li-NEE-us) in reference to a large and ancient tree of the small-leaved linden. To the people in the Swedish province of Småland, his home, this tree was known as the “linn.” Such trees also grew on the Linne property, known during the 17th century as Linnegard.

It was one of Linneaeus’ mentors from the Netherlands, Jan Frederik Gronovius, who very likely – through subtle but strong suggestions from Linnaeus – selected this typical woodland blossom to transmit the great master’s name to posterity.

One of Linnaeus’ most important contributions to botany was the recognition that plants reproduce sexually, but it’s easy to imagine that this notion was very unpopular when he first introduced it. One of his former teachers and fellow botanists, Johann Siegesbeck, snorted in disgust upon hearing of Linnaeus’ new system, saying, “Who would have thought that bluebells, lilies and onions could be up to such immorality?”

Linnaeus was not one to casually brush aside such a caustic remark. He retaliated by naming a very common, ugly little weed Siegesbeckia orientalis.

To present-day botanists who largely concern themselves with matters of taxonomy, the great Linnaeus is just plain “L.,” the letter in scientific manuals that immediately follows the scientific species name and indicates the naming of an outstandingly large number of important organisms.

If you tour Sweden today, you’ll find that Linnaeus is still greatly honored. His picture appears on the 100-kronor bill; a large statue of him occupies an important place in a Stockholm park; and a chiseled silhouette of him at his graveside is labeled in Latin, Princeps botanicorum: “the prince of botanists.”

Every time I kneel down to admire the delicate twinflower and inhale its refreshing perfume, I think of that giant of a man, Carl Linnaeus, who contributed so much to science.