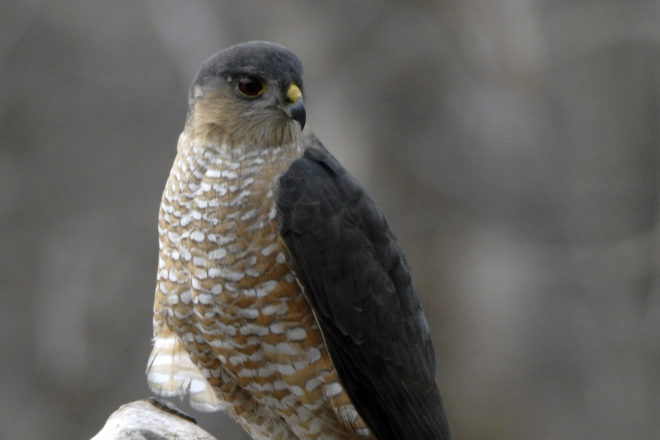 A sharp-shinned hawk sits patiently, waiting for its prey to make a move. Photo by Roy Lukes.

I was participating in the annual Great Backyard Bird Count on Feb. 15 when I heard a loud bang on my dining room window and saw a mourning dove fall to the ground in the grasp of a sharp-shinned hawk. They both landed in the snow not far from one of my feeders.

The sharp-shinned hawk is one of the accipiters: species that include the northern goshawk and the Cooper’s hawk. They are swift-flying predators that are the most common ones to seek smaller feeder birds in our yards.

These hawks have short, rounded wings and long tails that help them to move through woodlands in swift pursuit, carrying out quick maneuvers of dashing and dodging. They can fly through trees with amazing speed and dexterity. They don’t soar like the larger, open-country hawks, but they flap and glide when in the open.

Their method of hunting is to sit very still, usually in a secluded spot, watching and waiting patiently for their prey – small creatures or smaller birds – to move and reveal themselves. Then they rapidly dive down to grab their prey.

If you happen to see woodpeckers or nuthatches sitting completely motionless for long periods of time at your feeders, it usually means that an accipiter is in the neighborhood. Wild songbirds sense that if they remain perfectly motionless, the hawks can’t see them.

When I think of disappearing wild birds, I don’t blame the hawks. In fact, most predators of other birds or animals usually weed out the older or sick individuals, which allows the best of the species to survive. Ecosystems need many predators such as hawks and owls. They normally consume small animals such as mice and voles as well as small song birds. If the supply of these creatures is diminished, then the predator numbers will also decrease.

I used to see red-tailed hawks in all months of the year in Door County, but during the past several years, I’ve been lucky to see one or two all winter. Their numbers seem to be declining, at least in my area. They used to be quite common here during the winter from late October until late April. A friend told me that he just saw his first rough-legged hawk of the winter, and that was in the middle of February.

Feral cats consume a lot of the food that these hawks need to survive. House cats are fine pets, but they should be kept indoors and not allowed to roam outside, killing the wild birds and other rodents that native birds need for food.

The northern goshawk, the largest of the three accipiters, is able to capture and kill a ruffed grouse. In fact, the old name was grouse hawk, now shortened to goshawk. The Cooper’s hawk is in the middle range in size. In many predator species, the female is larger than the male, which helps her to protect the eggs and the young and to fend off competition at the nest. A male Cooper’s hawk can often be nearly the same size as a female sharp-shinned hawk.

A term sometimes used for these accipiters is “blue darters,” which comes from the blue-gray color of the back and wing feathers and their way of appearing and leaving with such speed.

The sharp-shinned and Cooper’s hawks can be difficult to identify because of their rapid moves, but when seen sitting still, you’ll notice that the sharp-shinned hawk’s tail is square at the end, and the Cooper’s hawk has more of a rounded tail, with a distinct white edge.

The Cooper’s hawk’s head has a darker crown than the sharp-shinned, and the goshawk has a prominent, white horizontal stripe over the eye. Its breast is more gray; Cooper’s and sharp-shinned have rusty striping on the chest.

Years ago, the sharp-shinned was called the sparrow hawk, and the Cooper’s was referred to as the pigeon or chicken hawk. Some people would shoot them because they didn’t like them killing their birds. It’s OK to kill and eat chickens and ducks, but not hawks! Now federal laws protect all hawks and these accipiters, and people who raise chickens know how to protect their birds.

We hope the accipiters can be safe, find enough food and live normal lives.