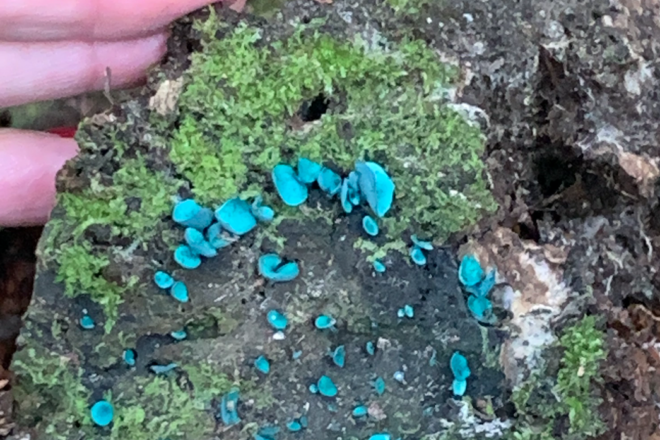 A hand next to the blue-staining mushrooms shows how small they are. Photo by Charlotte Lukes.

While enjoying a hike with some friends recently, I photographed a seldom-seen mushroom. It’s commonly called the blue-stainer, or Chlorociboria (klor-o-sy-BOR-ee-a) aeruginascens (a-roo-jin-ESS-ens). Most often, all that’s visible is well-decayed pieces of wood with the blue stain in them, but not the actual mushroom.

This group of fungi in the Peziza family is usually cup shaped, and it can be large and growing on the ground, or tiny and found on rotting wood. The yellow fairy disks, Bisporella (bye-spor-EL-a) citrina (sit-REE-na), are only 2-4 mm wide and grow on dead hardwood logs that have lost their bark.

Mushrooms are nature’s recyclers, so they play an important role in our environment. This class of fungi includes plants that reproduce through microscopic spores rather than seeds. The common white mushrooms and portobellos that are sold in grocery stores’ produce departments are, like wild mushrooms, not the plant. They are, instead, just the “fruit” or reproductive part.

Mycelium is the vegetative part of the mushroom, and it grows hidden in many areas, absorbing moisture and nutrients. When conditions are perfect, it produces mushrooms.

Before high-powered microscopes were invented, there were many myths about wild mushrooms, so common names hearken back to those earlier times: fairy tubs, devil’s urn, witch’s hat, devil’s snuffbox and elfin saddle.

Strong storms and persistent, heavy rains can induce a “fruiting” in many mushrooms – even seemingly overnight. Another idea was that fairies dancing at the midnight hour brought out these strange mushrooms. In ancient days, toads were thought to be venomous, so any mushroom that had a toad on or near it was considered poisonous and termed a “toadstool.” The name “mushroom” was reserved for those that were known to be safe and edible.

Today, courtesy of many useful field guides, we have an increasing knowledge of mushrooms. Invest in a good, recently written field guide for your part of the country, and read the introductory pages that explain its use.

To learn which mushrooms are edible, you must observe them closely and take careful notes about how and where they are growing. For example, what is the host on which the mycelium is feeding?

Another key, basic element of mushroom identification is to determine on which part of the fruiting body the spores are produced and released. Gills are the platelike structures on the underside of the cap, such as in a portobello. That’s where spores are released.

Look around and record the names of trees growing within 50 feet of the mushroom. Is it growing in a united cluster or scattered about with similar others in a small area, or are there just a few in the area? It is important when collecting mushrooms to select fresh specimens at different stages of growth because the caps can change dramatically from very young to mature stages.

Never store your collection in a plastic bag. Always keep each species separate in a waxed paper bag, rolling the opening to seal it. Sheets of waxed paper can also be used by twisting the ends after rolling up the mushroom inside the paper. I make notes in the field, numbering each species as I make initial examinations, and then I write that same number on the waxed bag.

Colors are also important to observe: Seeing any color change when a mushroom is handled or cut is valuable. Odors can be difficult to determine, but I find that smelling the mushroom while it’s still in the waxed bag when I’m ready to study it at home sometimes helps because the aroma has concentrated inside the bag.

Once you’ve done more examining at home – such as measuring the sizes of the cap and stem, noting how the gills are attached to the stem, and observing whether there’s a ring on the stem or a bulb or “death cup” at the base – then it’s time to make a spore print.

Cut the stem very close to the top so that you can put the cap, with the gills facing down, on a piece of white paper. Cover it with a glass so that the cap will stay undisturbed overnight. The next morning, lift the glass and the mushroom cap, and you should have a good, heavy print of the spores. The color of a good spore print is another aid to guide you in identifying the mushroom.

Learning to use your field guide’s keys will help you zero in on the family, genus and species, but you cannot reach your identification goals without careful observation of all parts of the mushroom. Don’t just compare your findings to a photo in a book – there’s so much more to examine to be certain of your identification.

It takes only one foolish mistake to cause severe illness or even death when eating a wild mushroom that you thought was safe. Better yet, just enjoy finding, observing and perhaps photographing the colorful fungi that you see during your walks in the woods.