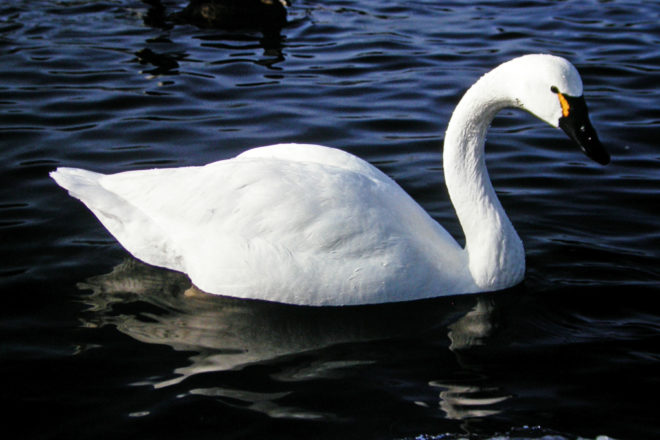 A tundra swan shows the beak with the yellow patch close to its eye. Photo by Roy Lukes.

Many years ago, March was the month when my late husband, Roy, and I would anticipate the return of flocks of whistling swans as they migrated back north from their wintering sites along the Chesapeake Bay.

You may remember that the name “whistling swan” was changed to “tundra swan” sometime during the early 1980s. I asked my friend Tom Erdman, a bird bander and retired director of the Richter Natural History Museum at the University of Wisconsin-Green Bay, about this change.

He explained that the Eurasian swan, called the Bewick’s, was a subspecies of our whistling swan. It was decided to name this large group – which is a circumpolar breeder in the Arctic region – the tundra swan. We can still refer to our swans as the whistling race of the tundra swan. Ours are a bit larger than the Bewick’s in Europe. They also have a larger swan called the whooper, just as we have a larger one called the trumpeter.

The wingspan of the tundra is 80 inches, and the trumpeter’s wingspan is 90. The Eurasian Bewick’s is 70; their whooper is 92 inches; and the locally resident mute swan has a 90-inch wingspan. Just for comparison, our bald eagle has a wingspan of 80 inches.

During early springs of years with heavy snowfall and deep frost, we could find flooded fields of cut corn that often attracted these large, white birds to settle there and look for leftover grain on the ground. They would stay in this region for a week or more, until the weather improved for them to continue their flight to their nesting grounds.

It was always a thrill to hear a flock flying over with the whistle sound in their wings and their slightly musical honking calls to each other. Migrating birds often arrive during the spring on strong south winds that help to push them along.

There are several fields in low spots that accumulate melt water from the snow cover. One is along County I a few miles east of Carlsville. Another place where we would find big flocks of tundra swans is what we used to call Tilden Gabert’s pond. That wetland – now called the Oak Road Preserve – has been saved and belongs to Door County Land Trust.

The Chesapeake Bay, where tundra swans had spent many winters, was a place where they could feed on clams that they dug out of the shallow, muddy shorelines. However, resident ring-billed, herring and great black-backed gulls were adept at snatching the clams from the swans, stealing their food. That watershed was also becoming dominated by mute swans.

Tom said that during the late 1980s, the tundras began to move inland, away from the Chesapeake, and forage in farm fields the way Canada geese and mallards do. That is probably why we see this activity happening in our area as tundra swans stop during their northward journey.

Tundra swans have a thin, horizontal, yellow patch on the side of their beak. Bewick’s swans have a much larger yellow patch at the base of their bills. Trumpeter swans’ beaks have an even thinner colored line on the lower bill that almost appears to be a light orange.

Tundra swans have a more rounded head, and the top of the beak is slightly concave. The amount of yellow is variable and is higher on the side of the beak, close to the eye, than that on the trumpeter.

Mechanical harvesting of corn has been good for these swans, as well as for Canada geese, mallards and sandhill cranes. Those fields have become a reliable food source for migrating waterfowl.

I reviewed the Sturgeon Bay and Brussels Christmas bird counts dating back to 1996 and found that tundra swans were reported in half of the 26 years that we have done these. Friends who live in far Northern Door see tundra swans much of the winter along the Lake Michigan shorelines. Most do migrate farther south, but a small population stays here as long as the lake isn’t frozen.

Enjoy the warmer south winds in March, and listen for flocks of tundra swans flying north. We are all eager for spring and the returning birds.