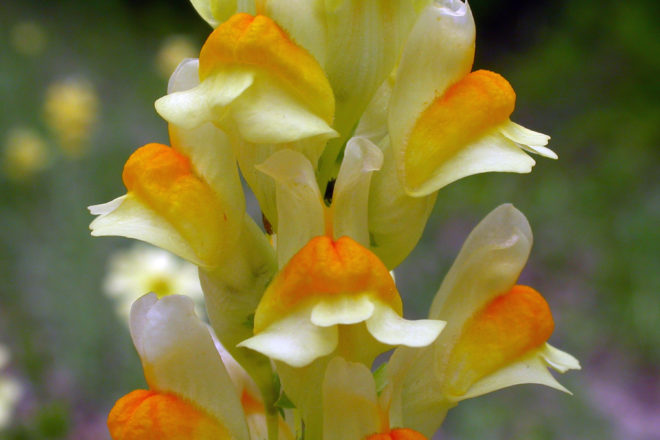 The butter and eggs flower shape is similar to that of the snapdragon. Photo by Roy Lukes.

I’ve been seeing several 15-inch-tall dark brown plants at the edge of cultivated fields in the waste places between the side of the road and the planted crops. I remember Roy calling the plant curled dock, Rumex crispus. When looking up the plant in regional wildflower guides those I found did not look much like what I’ve been seeing.

I finally went out early one morning before breakfast when the air was calm and found several. I photographed them and brought one home. Upon closely examining the plant I realized the dark brown parts were not flowers, but the seeds. The flower guides illustrate them while in bloom when they are pale green and blend in with other plants.

My favorite wildflower book, Newcomb’s Wildflower Guide by Lawrence Newcomb, showed the plant in the stage of growth that I was seeing. It is in the buckwheat family. That is the same family of one our most invasive weeds that also border some roadsides, the Japanese knotweed, Polygonum cuspidatum, (po-LIG-o-num cus-pi-DAY-tum).

Years ago, when Roy would conduct his Friday morning exploratory tours for the Ridges Sanctuary, he took the group to a large wetland area a few miles south of Sister Bay. It was a good place to study some marsh or swamp plants including another in that genus, which Roy called the water smartweed, Polygonum amphibium.

One lady in the group tried to help Roy when he could not remember the genus name for the pink-flowered water smartweed. She said, “Oh, I think it is Intelligentsia!” That took Roy by surprise; then he realized she was just interjecting a bit of humor into the situation.

James Russell Lowell wrote that, “A weed is no more than a flower in disguise.” Ask a farmer, orchardist or gardener and they’ll tell you that weeds are plants that grow where they are not wanted. Ella Wheeler Wilcox summed it up this way:  “A weed is but an unloved flower.”

Emerson, when asked his opinion about weeds, replied, “What is a weed? A plant whose virtues have not been discovered.” Actually many species of birds and other wild animals have known the good points about weeds for thousands of years. As a matter of fact so have some people!

The red-stemmed pigweed, a large, coarse, stiff annual weed, is known to have at least 55 wild animal users such as the mourning dove, redpoll, junco and song sparrow. One plant was examined and found to have 129,000 seeds.

Ragweed, one of the most despised weeds in the world, bears many seeds used as food by a lot of our favorite songbirds including the snow bunting, goldfinch and horned lark.

Hundreds of weeds were extremely important to people years ago who had neither the services of a family doctor nor the convenience of a corner drugstore. A surprisingly large number of weeds were eaten by people.

One could call lamb’s quarters the genuine “Popeye weed.” It contains more iron, protein and vitamin B than either raw cabbage or spinach, and has more vitamin B1 and calcium than raw cabbage. Years ago it was considered to be the vegetable of greatest value in people’s diets.

Queen Anne’s lace, now decorating fallow fields, ditches and waste places far and wide in this region, has been found to be rich in vitamins A and E. Parts of the plant were used in treating bladder disorders and kidney troubles. Its leaves are said to pep up salads, soups and stews.

Being partial to blue, one of my favorite of all flowers, weedy or tame, is the chicory. How beautifully they sparkle in the early morning sunshine along out-of-the-way roadsides. Study the unusually punctual opening and closing of the chicory blossoms. Like a floral clock they will be open for about five hours in the morning. It’s up to you to determine when!

For years the long, fat, fleshy taproot of chicory was cooked and served with butter. (Go easy the first time.) Some southerners prefer their coffee blended with roasted and ground chicory root.

Believe it or not, North Carolina claimed the alien but alluring ox-eye daisy as its state flower until 1941 when some botanists got on the necks of the state legislators and had them change the official plant to the flowering dogwood. All the daisy’s parts are edible as holds true for most other chrysanthemums, but have you ever heard of a “daisy dish?” I haven’t either. 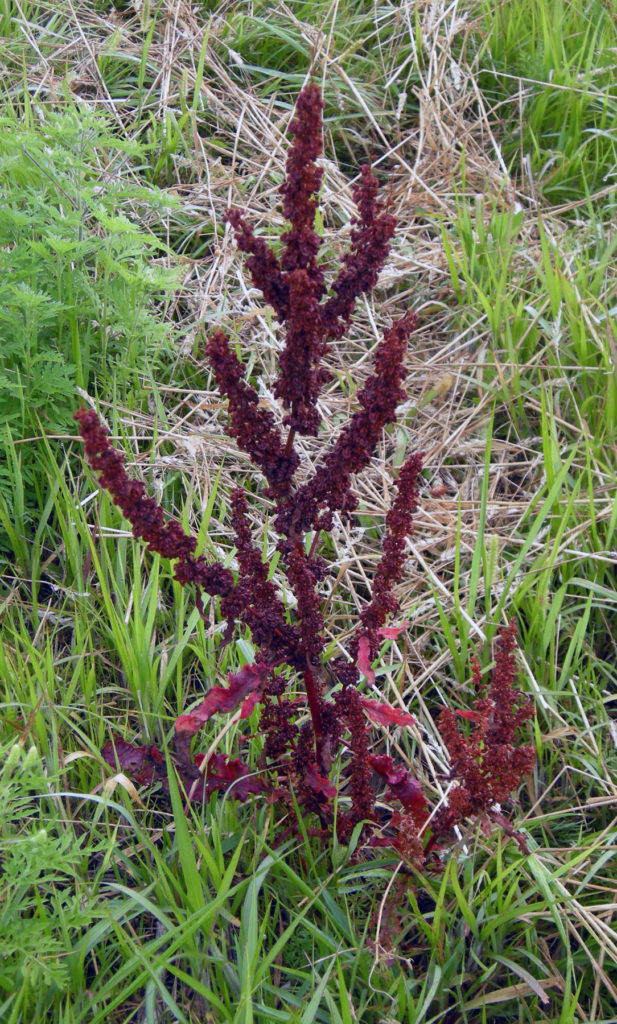 Curled dock in a field appears to be deep brown due to its seeds. Photo by Charlotte Lukes.

This perennial plant (along with many others), that arrived in the U.S. with our ancestors, is a very troublesome weed to farmers. It is known to be quite bitter and somewhat acidic and actually was primarily used years ago as an insect powder for destroying or driving away fleas. Surely you’ve heard of its relative, the daisy fleabane.

A large, colorful, hardy perennial, the soapwort is now in blossom. What lovely light lavender flowers these wild weeds have. Cultivate these relatives to the carnations and pinks and they will grow to four feet in height. They have little scent during the daytime but are delightfully fragrant at night.

Its genus name, Saponaria (sap-o-NARE-e-a), based on the word “sapo” meaning soap, reflects its many years of practical use and its properties. Crush its leaves or blossoms firmly between your fingers and you immediately feel their sudsy soapiness. The plants are high in saponins, a component of soap.

Because the plant also contains gum and mucilage it possesses exceptional cleansing properties. It was especially used in the past (and present in some Eastern European countries) for washing woods, linens and silks. Its sap is also thought to soothe a rash resulting from poison ivy contact.

Another favorite weed of mine, butter and eggs, (toadflax) is coming into bloom now. Its genus name of Linaria comes from the resemblance of its leaves to those of flax (linum). Boiled in milk and set about the house years ago before the advent of window screens, the concoction attracted flies to what proved to be their last meal. As for its medicinal value to humans, a potion made from the butter and eggs plant was used to treat skin infections, ulcers and hemorrhoids. 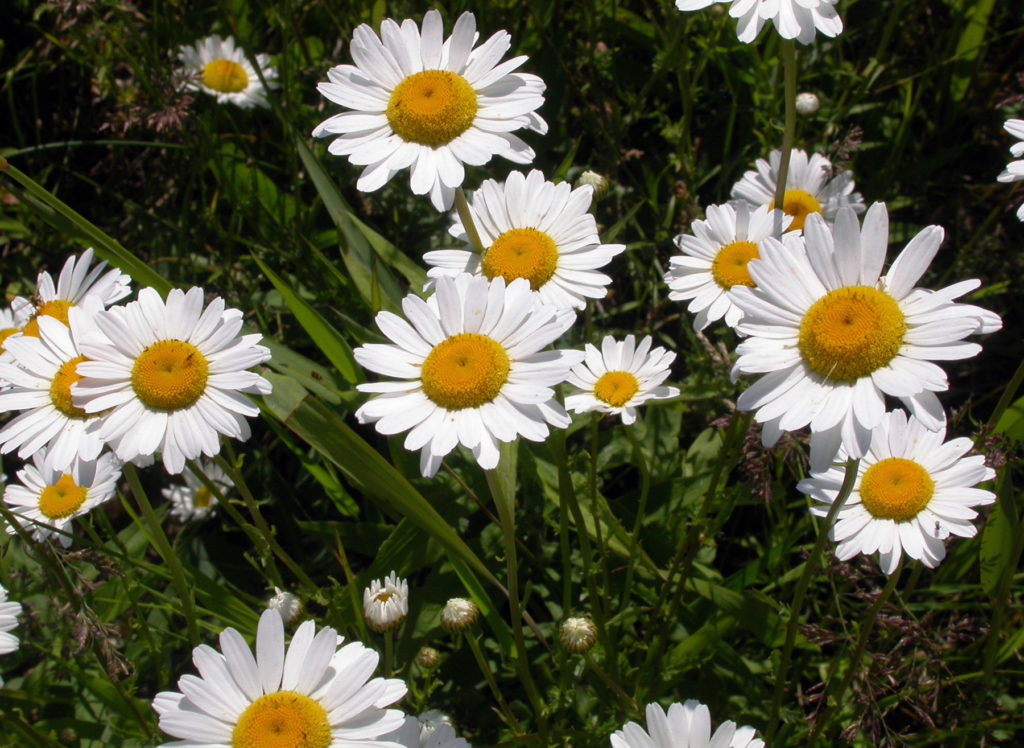 An ox-eye daisy is a pretty flower but not to farmers and gardeners. Photo by Roy Lukes.

Do you have freckle problems, especially in summer? Consider consuming the roots (raw, boiled or roasted) of the parsnip-flavored silverweed, Potentilla anserina (po-ten-TILL-a an-ser-EYE-na).

One could go on and on about the value of weeds. The next time you are pulling them in your garden and your lower back is aching, think of how valuable weeds have been to people and wildlife throughout history.

Indeed, their virtues have been discovered!