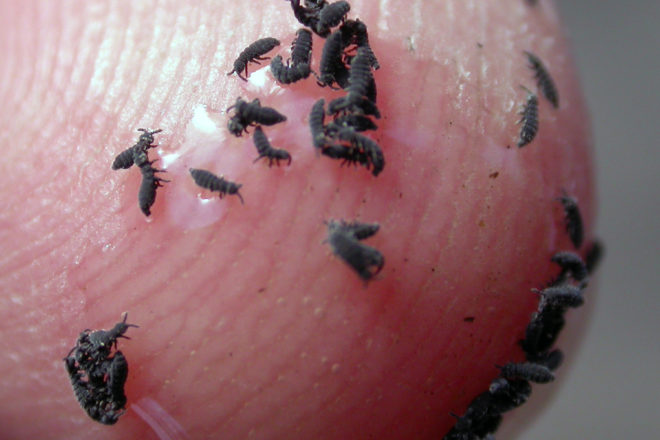 Snow fleas sit on a fingertip, showing how tiny they are. Photo by Roy Lukes.

As I write this, it’s the last Sunday in February, the sixth straight day of wonderful solar heat and the second day in a row with a high temperature above 40 degrees. It made me get out to chop the leftover ice on my driveway and enjoy the spring-like temperatures.

My friend Dale Goodner was the speaker at our Unitarian Universalist Fellowship of Door County morning service in Ephraim, where he spoke about the forest community and the many important, valuable aspects of the soil, especially in the top layer. I quote him, “Don’t treat it like dirt!”

He also talked about snow fleas, so that made me look for them today. And sure enough, I found a large cluster on the snow bank near the garage.

We normally first see these tiny insects in March, when daytime temperatures often stay above freezing. One year, my late husband, Roy, found many of them while on a hike in our snowy woods during the first week of January on an unusually warm, 39-degree day.

Snow fleas look like black dots or black pepper scattered on the surface of the snow. In his journal, Henry David Thoreau described them as tiny specks of life “whose summer and prime of life is a thaw in winter.” The winter thaws “call to life the snow fleas.” It is a rare occasion to see these miniature, primitive, wingless insects during any other time of the year, except on a day above freezing when the ground is covered with snow.

Fortunately, these amazingly small, but agile creatures are not even remotely related to the fleas that many pet owners hope won’t pester their cats and dogs. In fact, of the 314 species of snow fleas – better known as springtails – that have been recorded in North America, most feed upon disintegrated organic matter in the forest floor duff, especially pollen found in leaf litter.

They have no metamorphosis and, during growth, shed their skins at intervals. Their life cycle is an example of growth by direct development from embryo to adult.

After mating, springtails’ eggs are scattered in holes in the soil. The young feed and grow during the summer and mature by early winter. Springtails are most active on warm, winter days and especially in early spring, when they mate.

The name springtail comes from the fact that the fourth abdominal segment bears a forked furcula, or spring, that is normally folded forward under the abdomen. The third body segment is equipped with a tenaculum, or trigger-like catch.

Therefore, they neither walk nor fly, but instead, they catapult! Their random leaps can be three to four inches, which is really quite a feat for an insect this small. They might also walk, but at such a slow pace that one would need a hand lens and a lot of time to detect this movement.

One year in March, we noticed that a tire-track depression in the driveway was filled with melted snow that appeared to be completely black. It was not oil, but a sea of millions of snow fleas. Their diminutive size – about two millimeters – and the fact that their bodies are covered by a meal-like powder and small hairs enable them to float easily on the water.

What’s truly astounding is that these highly inconspicuous, insect-like arthropods (described in insect field guides) surely must be among, if not at the top of the list of, the most abundant creatures living in our country.

Here’s another piece of nature trivia. Many people would think that species such as white-tailed deer, squirrels, rabbits or mice would rank as the most abundant mammal in the county. Actually, it’s the short-tailed shrew, or mole shrew, but so few people see one simply because of its highly secretive lifestyle. The same holds true for the lowly snow flea.

They are not true fleas, and they represent only a tiny fraction of the marvelous, complex organisms that break down leaf litter and other organic matter on the forest floor. They are an obvious benefit to trees, wildflowers and other plants of the woods – among nature’s recyclers of organic materials and good soil builders.

Once mating occurs, the tiny springtails – or nymphs – are born, but they don’t yet look like adults. As they eat and grow, they shed their outer skin, or exoskeleton, several times. By late fall, they look like adults. Their food consists of molds, decaying vegetation, algae, bacteria, fungi and microscopic animals such as roundworms and rotifers.

These mysterious little creatures, perhaps descended from the wingless ancestors of winged insects, are to be admired and then ignored. They will go their way, and chances are, you won’t see them again until the next perfect snow-thawing day of the following winter.