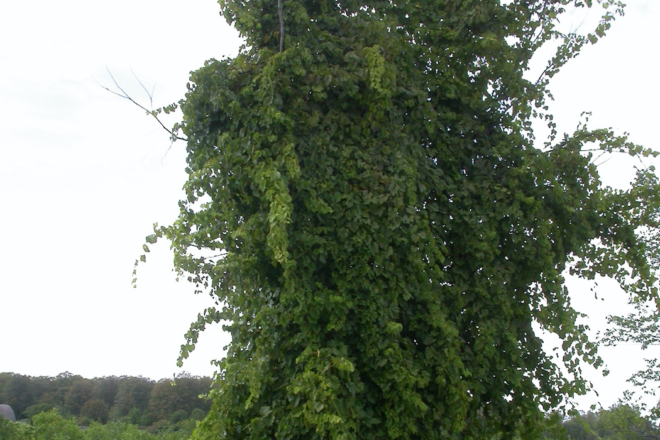 You wouldn’t know it to look at it, but there’s a tree under this large mass of wild grape vines. Photo by Roy Lukes.

While driving around the county on quiet back roads, I often notice shrubs or trees covered with a dense mat of wild grape leaves. If you’ve ever driven through Tennessee and points south, you would have seen thick vines covering structures, trees and power poles.

That vine is kudzu, which was introduced to this country from Asia at the 1876 World’s Fair in Philadelphia as a garden novelty plant. It became widely used during the Dust Bowl days of the 1930s to help prevent soil erosion in the South. In 1935, the U.S. Soil Conservation Service grew 70 million seedlings and offered landowners $8 per acre to plant them.

The kudzu vine was used in China and Japan for hay, as a forage crop and for erosion control. It has tuberous roots that are edible and stems that yield a fiber. Horses and cows graze on it.

Our northern version, which overtakes many plants and trees, is called the riverbank grape, Vitis (VEE-tis) riparia (rip-AIR-ee-a), referring to the shore. Another name for this plant is the frost grape, perhaps because the fruit takes on its finest sweetness only after it has been exposed to a few frosts.

The riverbank grape vines can climb up trees and reach a height of 50-100 feet. Its three-lobed leaves are quite rounded in general outline; its coarse teeth are usually longer than wide; and the lobes of the leaves point forward. The undersides of the leaves are green and nearly smooth.

Old, established vines can have stems that are several inches thick. The vines are dioecious (dy-EE-shus), meaning the plants are either male or female. This species is often used as grafted rootstock and in hybrid grape breeding.

Grapes in general are woody vines that cling by tendrils. The riverbank grape tendrils or flowers are usually missing at least every third leaf or bud. Another aspect of this species is that the tendrils are forked.

As you’d expect, grape vines are real climbers that need plenty of sunlight. They often grow many feet to reach open, sunny spaces, frequently at the expense of the tree or shrub to which they’re clinging.

Grapes bloom in early summer with small, greenish-white flowers on a panicle: an extended, branched cluster. Early fruits are green and rather small. As autumn nears, they gradually turn to a purplish-black and have a distinct bloom. Botanists would say that the fruits are heavily glaucous. Most of the wild grapes that we’ve tasted in past years were about as sour as I could imagine, but the jelly and wine that some friends made from them were unusually good.

Historically and commercially, Vitis is a very important vine for grapes, raisins and wine. This genus can be confusing to identify to species. Considerable hybridization occurs, and intermediate forms are common. For example, it was from the fox grape, Vitis labrusca, of the eastern part of the United States that the famous and widely planted Concord grape and other cultivars were produced.

Some varieties of the riverbank grape are known to withstand temperatures of -70 degrees F and are resistant to black rot and mildew. The native grape vines are also able to repel a tiny insect called phylloxera – a sap-sucking critter similar to an aphid – by secreting a gluelike substance to seal any attempts at entry.

The real value of wild grapes is as food and nesting sites for birds and other wildlife. At least 75 birds and mammals use the fruit of the grape, nest in its thickly clustered vines or use its shredded bark in constructing nests.

At the top of the list of bird users is the northern mockingbird, which may get 25-50 percent of its annual diet from grapes. American robins, turkeys, ruffed grouse, cardinals, all of the finches, pileated woodpeckers, raccoons, black bears, opossums and skunks are also big users of wild grapes as food, which may explain how so many seeds have been distributed in the county.

People through the centuries have also made wide use of grapes of all kinds to create jelly, juice, pie, wines galore and even stuffed grape leaves. All in all, the grape – both wild and commercial – has greatly benefited humans and the planet’s wild creatures.