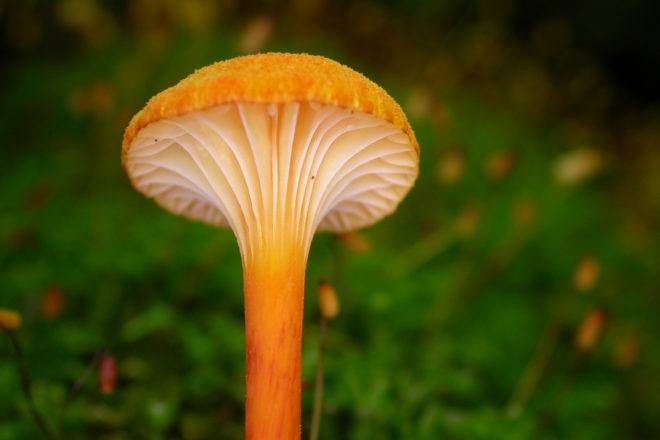 Graceful decurrent gills are a characteristic of the chanterelle waxy cap. Photo by Roy Lukes.

This is the best time of year to search for wild mushrooms, but the five mushroom hikes that I’ve led since late August have been quite disappointing. That’s because the long, dry summer dehydrated the ground and the mycelium that produces mushrooms.

The last good rain that I’ve had on my land came Sept. 12, with more than an inch. Since then, the small showers have been just enough to wet the pavement. After a long dry spell, we need numerous heavy rains of several inches to get the mycelium – the actual vegetative plant – out of dormancy, and then more heavy rains after that to get the mushrooms to grow above ground.

Three years ago, I led a mushroom hike at Crossroads at Big Creek in Sturgeon Bay, where I found a good variety of fungi. I even shot a video of salmon swimming up Big Creek. This year the creek was dry, and few mushrooms were found.

Some people look for tasty morels in the spring. They do not grow in autumn. Most mushroom species have a specific season of growth, and it is usually as summer progresses into fall, with cooler, wet weather. The golden chanterelle is one of the few good summer mushrooms.

Once we get a frost, some other species appear, such as the shaggy mane, honey cap and black trumpet. I’ve had several people tell me recently that they found a giant puffball. My records show that this mushroom is often found a full year after we’ve had a rainy season.

Mycelium is a thread-like growth of fungal cells that penetrates much of the soil and grows in dead or dying trees, and it is usually hidden from view. Numerous studies within the past decade have shown how important this organism is to trees and their ability to connect with each other, and adequate soil moisture is so important to this symbiotic relationship.

People who enjoy eating mushrooms are familiar with those that are sold in the produce departments of grocery stores. Nearly all are rather bland in color – white, tan or brown species. If you hike the wooded trails in some of our parks and preserves now, you might find small, very colorful mushrooms growing on the ground or in moss.

These small ones are usually in the Hygrophorus (hy-GRAF-er-us) family, and a common term for this group is waxy caps. That’s because when you hold a cap in your hand and press it between your thumb and finger, it tends to stick together like candle wax. I don’t know of anyone who eats them because they have no flavor.

During these dry times, I look for mushrooms growing on tree stumps or on dead trees that are lying on the ground. Lately there have been some small puffballs developing there, and chicken of the woods may also be starting to grow.

The logs usually have polypore mushrooms growing on them. These can be dull gray or white, but some can be quite colorful, such as the thin, flexible turkey tail fungi. These small, one- to two-inch growths are often seen in overlapping layers on the side or end of a log. Most are too hard to even consider eating, but a few can be used for decorative purposes.

An estimated 10% to 15% of wild mushrooms are edible, and about 10% are poisonous. Field guides describe the toxins found in mushrooms, and some say there are seven major groups. Most have gastrointestinal poisons that cause people who ingest them to vomit within a few hours.

Other types of toxins are more dangerous because they can destroy the liver, kidneys and red blood cells. Some of these poisons do not reveal their effects for many hours or even days, so sometimes the victim does not associate the illness with the mushroom.

The giant puffball is one of the safe edibles. There is nothing that big, white and round that is poisonous. They can be cut in half and easily peeled, then sliced into squares and sautéed in butter or olive oil. This mushroom must be well seasoned because it is bland. I’ve heard that some people prepare a large slice and bake it to use as pizza dough.

However you enjoy searching for or eating wild mushrooms, be 100% sure that the one you choose is a safe, edible species. And save an entire raw mushroom refrigerated in a waxed paper bag so that you can show the ER physician what made you ill in the event that happens.