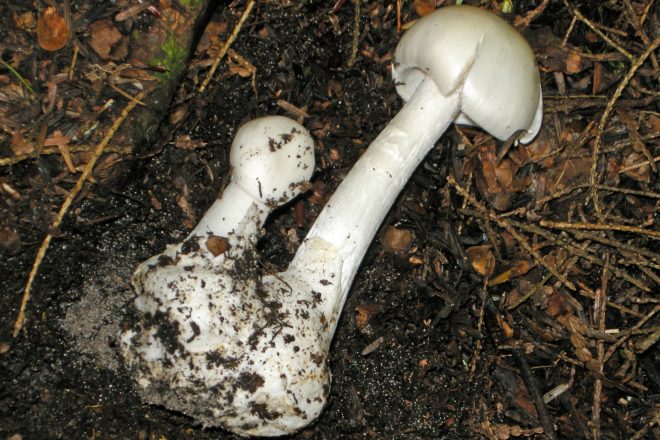 The stem of the deadly white Amanita has a bulbous base that is hidden in the ground. Photo by Roy Lukes.

I remember the day when I photographed my first wild mushroom. It was 50 years ago, in early October at Toft Point, when we found a very unusual tan growth called the white elfin saddle, whose scientific name is Helvella crispa. Having enjoyed horseback riding a few years earlier, the saddle shape of the cap intrigued me.

Early poisonings of people who had eaten this mushroom, and those closely related to it, were attributed to helvellic acid. Later studies changed the name to gyromitrin (jy-row-ME-trin). Those who ate the uncooked mushrooms died. Those who parboiled them, threw away the water and then cooked and ate a small amount seemed unaffected. When inhaling the vapors of the boiling fungi, they were poisoned. If a large quantity was consumed, many people vomited, had diarrhea and died a few days later. It is foolish to eat species with this kind of history!

The mushrooms containing gyromitrin are called false morels. I have found three species of them in Door County. Some grow in the spring, when the true morels appear, and others grow in autumn. Even the edible true morel can cause poisonings. Some friends, for instance, ate a huge serving of the common brown morel, properly cooked, and got very sick. They recovered, but they realized that mushrooms are not easily digested in large quantities.

When gyromitrin is hydrolyzed (boiled in water) it forms the deadly monomethylhydrazine (mah-no-meth-el-HY-dra-zeen), or MMH, toxin.  Some aerospace centers such as the Air Force were studying these toxic properties because large quantities are used as rocket propellants. The illness of the workers who were exposed to MMH was identical to those exposed to the gyromitrin toxin. MMH is a decomposition product of gyromitrin in the presence of water.

The most common of mushroom poisonings result in gastrointestinal distress within a couple hours of ingestion. People have diarrhea and vomiting, but they usually recover within a short time.

There are a few mushroom species, however, that contain a deadly toxin called amanitin, and just one cap is usually enough to kill a person. The species known to be deadly are the destroying angel, Amanita bisporigera, and the deadly Galerina, Galerina marginalis. I have found them in many parks in our area.

The deadly Amanita may look like a common white mushroom that’s related to those you buy in the produce section of a grocery store. The mistake is made when people break or cut the mushroom’s stalk and fail to examine the base to see whether there’s a “death cup” deeper in the soil.

Both the common meadow mushroom and the deadly Amanita are white when young, and both have free gills and smooth caps. When the Amanita reaches maturity, it remains white because of its white spores. The meadow mushroom, also called pink bottom, shows darkening gills as the cap matures because of its brown spores.

Amanitin poisoning often does not reveal itself until six to 24 hours after eating the mushroom, so many people do not associate the violent vomiting and diarrhea with the mushroom. A trip to the hospital is necessary, but the medical personnel cannot be of much help if they do not know about the ingested mushroom. The victim may be given some medication and sent home, only to die a few days later, after the toxin has destroyed the liver and kidneys.

Other poisons are found in some common species. The alcohol ink cap, Coprinopsis atramentaria, also called the smooth ink cap, contains coprine, which reacts with alcohol consumed up to three days after ingesting the mushroom. It is a disulfram-like chemical that’s similar to Antabuse, a medication given to people who are recovering from alcoholism to stop them from drinking alcohol. The symptoms include redness of the face, a metallic taste sensation, lightheadedness, rapid heartbeat, nausea and vomiting.

Some species of mushrooms are hallucinogenic; others destroy red blood cells; and other less common species can destroy the liver and kidneys. Some are slow to develop their symptoms, taking from three days to three weeks to become evident. After that amount of time, it’s difficult to determine what actually caused the poisoning.

Be aware of environmental and agricultural toxins. Someone called me to identify mushrooms growing in an apple orchard. They were common meadow mushrooms, which are known to be edible, but apple orchards may be sprayed with pesticides many times during the year. Think of what’s being applied to the area where the mushrooms grow.

Also learn about mushrooms from a local expert, and take lots of notes. Get a recently published mushroom field guide for your part of the country, and read it from the first page to learn the basics. Never take home any species that are beginning to decay.

Once you have learned enough about wild mushrooms and have picked some to eat, cook them properly, and eat only one new type per week, in limited quantities. If you eat several new kinds and get sick, it may be hard to determine which one made you ill.

Always save a complete new mushroom in a waxed paper bag in the refrigerator so that a physician can see what made you sick. If in doubt, don’t eat any wild mushroom!