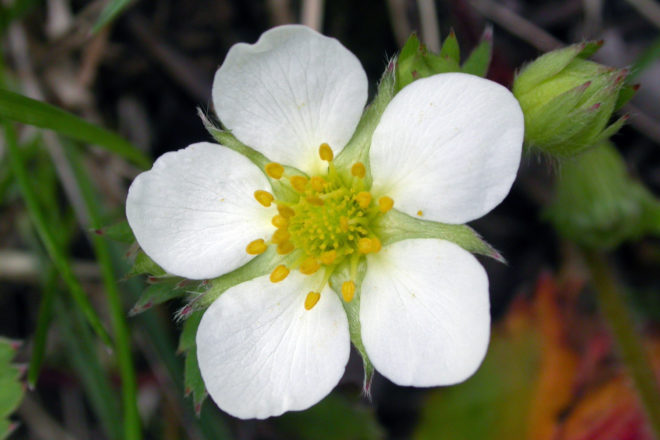 A single wild-strawberry flower is a symmetrical thing of beauty. Photo by Roy Lukes.

There perennial fruit in the large rose family, both wild and cultivated, could very well be called the “robins’ delight.” You guessed it: the strawberry. The open hillside near my home used to have many plants that would bloom during the last half of May. We never found any berries developing, though, due to the dry, sunbaked, south-slope location, which desiccated the plants before any berries formed.

This popular fruit is a wonderful symbol of perfect excellence. It’s been said that “doubtless God could have made a better berry, but doubtless God never did!”

Many people believe that the more intense flavor of the wild variety leaves the cultivated species in its wake. I remember a day in mid-June 1978 when I accompanied my late husband, Roy, on a photographing trip. While he shot pictures, I picked and ate wild strawberries growing in the ditch. Surely it takes much longer to collect the small, native berries, but the flavor is well worth the extra effort.

The genus of the wild strawberry, Fragaria, (fra-GARE-e-a) is Latin and refers to the fruit’s fragrance. The species name, virginiana, indicates where the first wild strawberries were studied on this continent.

Actually, there are two distinctly different species of wild strawberries: The wild strawberry has its minute achenes (a-KEENS) – small, dry, thin-walled fruits that don’t split open when ripe – embedded in pits on its surface. The American wood strawberry, Fragaria vesca, chiefly introduced from Europe, has its achenes on the shiny surface of its more elongated, conic fruit rather than embedded in deep pits. A number of old garden varieties evolved in Europe from the European wood strawberry, which eventually made their way to America. Some were also developed from our native wild strawberry.

A close look at one of the plants in bloom reveals a very beautiful blossom. Its showy corolla, with rings of nectar and golden pollen carried on 25 to 35 stamens, lures insects to the plants. Its five white petals are typical of the rose family, which also includes other favorites such as the apple, plum and cherry.

There are differences of opinion about the derivation of the word “strawberry.” Some believe that it came from the straw placed between garden rows to keep the fruit clean, but most horticulturalists now agree that in earliest Anglo-Saxon, it was called “streowberie” – and later “straberry” – from the peculiarity of its straying suckers looking as though they’d been strewn on the ground. Indeed, the stems run and develop new plants, spread by rhizomes and stolons that produce the new plants at the nodes.

Native Americans knew a lot about the many uses for wild strawberries. One was easing the suffering from colds – these fruits are rich in vitamin C. Crushed berries relieved inflamed sores and sunburn and were also made into a paste to remove tartar and clean teeth. The great Swedish botanist Carl Linnaeus learned that a good cure for rheumatic gout could be derived from strawberries.

Many wild animals use both the leaves and fruit, including the ruffed grouse, catbird, crow, robin, cedar waxwing, brown thrasher, eastern towhee, cottontail, chipmunk and mouse.

One of Roy’s favorite desserts was a mix of a small carton of vanilla yogurt, a small carton of strawberry yogurt and slices of fresh, sweet strawberries. And a friend used to serve a traditional Fourth of July treat: a three-tiered serving plate with large strawberries on the lower section, freshly made whipped cream in the middle section and powdered sugar on the top level. You’d take a strawberry, dip it into the whipped cream and then dip it into the powdered sugar – delightful!

One year I grew the Alpine strawberry – actually the American wood strawberry mentioned earlier – which were small and tasty. If you’re interested in growing strawberries and want to learn which cultivar is best for your area and garden, the strawberryplants.org website may be very helpful. It describes 247 varieties!