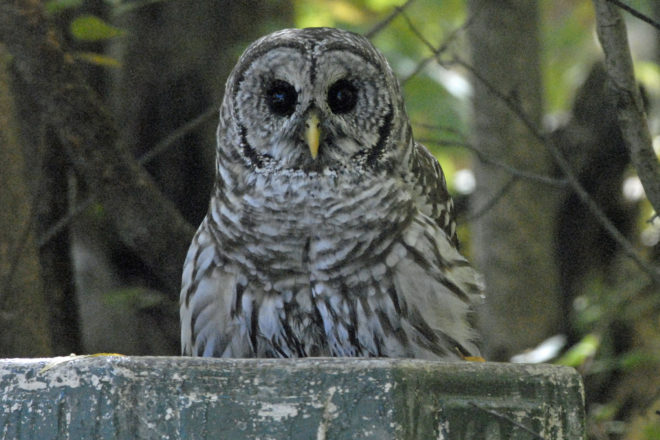 One of the county’s year-round residents is the barred owl. This one cooled off in our cement bird bath. Photo by Roy Lukes.

The winter avian landscape is usually much quieter than the summer breeding season. Bird activity during the winter is mainly to find enough food and seek shelter from predators. With few insects available to eat, it’s important to provide seeds and suet for both the bird visitors from the north and the year-round residents such as chickadees, nuthatches, woodpeckers and cardinals. Also vital is clean, fresh water every day in a heated bird bath.

The autumn migration is a very gradual one compared to its spring counterpart. Young, newly fledged migratory birds linger until their food supply diminishes and the adults begin to fly south. Now is when some new birds arrive to spend the winter here. Dark-eyed juncos are often the first to show up in September.

There’s another bird group that comes through during the fall, and some overwinter here. Accipiters are fast fliers that do nest here but are also seen during migration. They are often blamed for snatching smaller prey such as our resident songbirds and mourning doves at the feeders. Some of these smaller hawks may remain here during the winter months.

Accipiters are known by their rounded wing tips and long tails. They often sit in a forest, watch for bird activity below, then swoop in rapidly to snatch their food. They are very adept at swerving among trees with amazing agility and speed. Accipiters, unlike the merlin, pluck the feathers of the bird they catch before eating it.

Buteos are larger, heavy-bodied hawks with long, broad wings that help them soar high over open land. The red-tailed hawk is perhaps the most common in our area and nests in woodland edges. It’s easy to identify an adult by its rusty, red-brown tail. It has a four-foot wingspan and is only slightly smaller than the rough-legged hawk. During mild winters, it may not migrate south.

The open countryside of fields and grasslands is the best place to see the very large rough-legged hawks. Look for their white rump patch, and watch them hover in one place as they spy some food on the ground. This species nests in the Arctic and travels south during the winter as its food supply diminishes. The first sightings in autumn are usually in October, and they can remain here into early May.

You might see rough-legged hawks perched atop power poles or on trees along open fields and marshland. They prey on small- to medium-sized mammals such as mice and meadow voles. During winters of deep snow cover, they may travel farther south, where the ground is bare and hunting is easier.

Another open-country hawk that has a white rump patch is the northern harrier. It flies at a much lower level than the rough-legged hawk and can swoop quickly when it spies a mouse or vole. It has a longer and narrower tail. The adult male is gray above, and the female has brown feathers on the back and tail. During mild winters with light snow cover, it may not even migrate. The harrier is about 17 inches long, compared to the 20-inch rough-legged hawk, and the harrier’s wingspan is 44 inches, versus the rough-legged’s wingspan of 48-56 inches.

Falcons are a group of swift fliers with long, pointed wings and medium to long tails. They attack their victims with sharply notched and curved beaks that help them to sever the neck vertebrae. Species range from the smallest — the American kestrel at about nine inches long — to the merlin at 11 inches and the peregrine at 17 inches. Wingspans for these three are 22, 24 and 41 inches, respectively. We’ve had winters when all three species were seen in our area.

The largest of the falcons is the gyrfalcon, which nests in the Arctic. They seldom migrate this far south during the winter, but a report of one that was photographed near Ellison Bay came in on Jan. 19, 2020. They can be up to 22 inches long, with a wingspan of nearly four feet. They prey on mammals and ducks and like to hunt along shorelines or from an exposed perch. Their ability to fly rapidly allows them to follow a bird that’s swerving to escape, but they rarely do a stoop flight from high up the way the peregrine does.

The bald eagle is a common bird of prey that’s usually here all year. When Lake Michigan waters stay open, they catch fish, but during severe winters with frozen lakes, we’ve seen them acting like vultures by eating dead animals along roadsides. One winter, someone observed an eagle consuming a dead calf in a farmer’s field.

Owls are also birds of prey, and several species live here all year, including the barred owl and the great horned owl. Others that have been seen during the winter are the eastern screech owl and the short-eared owl. There may be more of them than we realize because they are difficult to count. They don’t come to feeders and are usually active at night, meaning they are seen less often.

Winters with little snow cover help short-eared owls to find food in the fallow fields where meadow mice are sometimes quite abundant. There was a colony of these owls in far Southern Door in January of 1995, and my late husband, Roy, took many photos of them. Northern harriers were also soaring over the same fields to grab voles and field mice.

During some years, snowy owls migrate down here from their far-northern breeding grounds. Members of that species are seen more often because they are active during the day. Their main food in the Arctic is a small rodent called the lemming, whose populations alternate through high and low cycles. It’s during the low cycle when many of the young snowy owls show up in the Midwest during the winter, often starving.

The eastern screech owl and the saw-whet owl are the smallest of the group and seem to be less afraid of humans. During the extremely cold and snowy winter of 2013-14, when Lake Michigan froze over, we learned of several screech owls that were found on the snow near Northern Door homes. It seemed that they were starving. The deep snow cover made their search for mice very difficult because the mice were taking cover under the snow, staying out of sight of their predators and eating the bark off of shrubs.

These small owls do not vocalize much for fear of being found and eaten by the bigger great horned owls. Obviously, the winter months are a difficult time to survive out in the wild. You might say it’s an owl-eat-owl world out there!