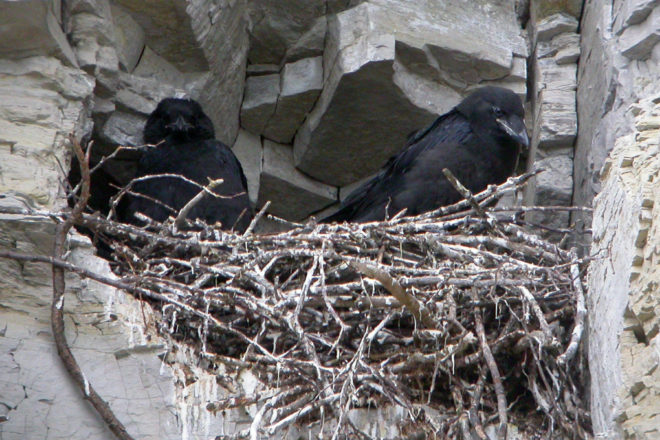 This nest of ravens shows how well constructed it is, with many large branches at the base. Photos by Roy Lukes.

A few days after the first measurable snowfall of autumn this past Nov. 9, I was driving home from Ephraim, going south on County A, and I saw an adult bald eagle fly over the road and then veer to the right. I slowed down when I reached the spot and there, about 10 feet from the right side of the road, was a medium-sized dead animal in the snow with a raven standing guard over it. The eagle sat in a nearby tree. Both wanted to feast on this carrion.

The job of eating dead creatures on our roadsides, and actually anywhere they can be found, is usually done by turkey vultures. However, they have all migrated to the south and now the other large members of the “clean-up crew” take over.

I lead mushroom hikes, teach classes and present slide programs in the county and often refer to wild mushrooms as nature’s recyclers. They grow on dying or dead plant material, and sometimes on insects, and act to recycle this matter back into soil so living plants can use the nutrients.

When I moved to Baileys Harbor in 1972 turkey vultures were seen only during spring and fall migration. The first documentation of them nesting in northeastern Wisconsin was in 1944 in the Oconto area. A turkey vulture captured and banded in the 1970s in Wisconsin was the first recovery of this species for a state bander and was later found in Honduras.

A phone call to Roy in mid-August 1988 from a couple boys living in northern Door County led us to the discovery of the first record of this species breeding in our county. The turkey vulture is very secretive and tries to nest in places that are inaccessible to humans or predators. They choose rocky cliffs and sometimes upper levels of old abandoned barns.

Our migration records show them arriving in Door County generally by the third week of March. However, in the very mild winter of 2004 the first one was seen on March 1. The last recorded sighting of them in autumn is usually during the third or fourth week of October. The latest recent date one was observed was Nov. 5, 2008. 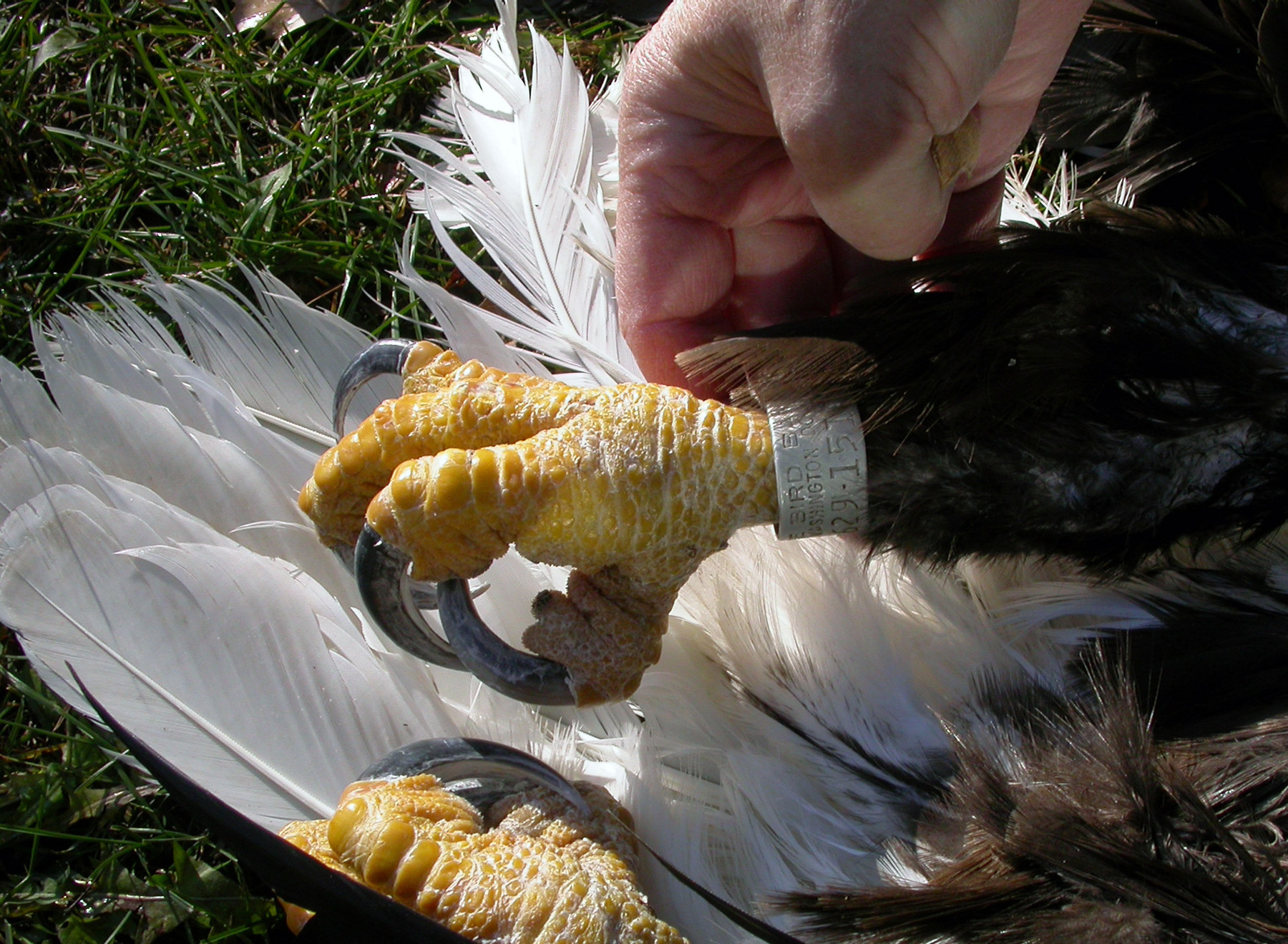 The bald eagle has huge feet with extremely strong talons for grasping its prey.

A similar history has been observed in Door County for the common raven. They were usually found here only in winter. Roy would occasionally see a few along the Lake Michigan shore feeding on dead fish or ducks. We were doing a breeding bird survey for the property owners of the Marshall’s Point peninsula along the lake, east of Sister Bay, one day in June in the early 1980s. All of a sudden we heard the harsh calls of several young birds and found a nest of ravens. They are a common breeding bird of our county and live here all year.

I looked back at a story Roy wrote for the Nov. 24, 1972, issue of the Door County Advocate. The first paragraph follows:  “An almost unbelievable, downright astonishing series of croaks, grunts, bell-like notes and squeals caught me off guard as I trudged through the woods at the Point the other morning. Had I not heard them in the past and seen the ‘singer’ responsible for them I would have been bewildered. Our northern friends have arrived for the winter – the ravens. Back, black and welcome! Exactly what attracts them to the big woods I do not know. They are primarily scavengers, playing the important role of devouring the dead animals in the forest.”

Ravens are very early nesters, often by the middle of February. A clutch of three to eight eggs are laid and then incubated for 21 days. Hatchlings will remain in the nest for 35 to 42 days before fledging. Some raven eggs can be hatched as early as the second week in March. Crows are a bit later in their nesting schedule. A captive raven was found to have lived to an age of 69 years.

Common ravens are quite solitary and will have nests several miles apart. They are excellent nest builders. The deeply hollowed-out site will have an outside diameter of two to four feet comprised of a large mass of twigs and bigger branches. Coarser plant material, earth and moss will follow, and then the nest will be lined with tufts of grass, leaves and more moss. One nest was discovered to have a final lining of deer hair that was four inches deep. These hollow hairs provide the nestlings with good insulation during the cold days and nights in March.

Bald eagles became very rare during the late 1950s and into the 1960s due to the effect that DDT had on their nesting. Eagles, being great fish consumers, would build up the toxin from the pesticide that accumulated in their food source. Eventually when an eagle nested and laid eggs, the shells were so thin they cracked easily during incubation.

The records for Door County showed that the last nesting bald eagle was at Toft Point. Once the DDT was banned from use it took many years for our national bird to recover and one of the first new nests was found to be at Toft Point. The key to their recovery success was keeping numerous wild and natural woodlands, bordered by fresh water, pristine and protected. Now eagles are quite commonly seen in all seasons of the year in Door County and throughout Wisconsin.

I remember getting a call from a neighbor a few years after we moved into our home in the rural part of Egg Harbor. He was a resident of Jacksonport and lived in the country and called to say that he saw a bald eagle eating a dead calf that perhaps a farmer had placed out in his snowy field. This was in February and the eagle was hungry so the calf supplied the bird with a great amount of food and the bird acted as a “recycler” at the same time.

Be thankful for the turkey vultures, common ravens and our national symbol, the bald eagle. They are nature’s recyclers – of the animal kind.