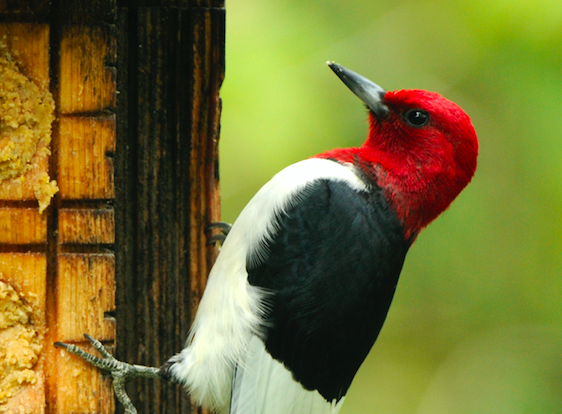 Red-headed woodpeckers have heads that are completely red, including the cheeks and throat.

Which animal has a hammer and chisel, a telegraph key for advertising, crampons and scaffolding to aid in climbing, built-in shock absorbers and even a face mask to keep dust out of its lungs? Obviously the creature in question is the woodpecker.

Its beak is an efficient chisel, coupled with strong neck and head muscles that provide the hammer. A highly protective, shock-absorbent skull helps to prevent brain damage. Incredibly strong legs, feet containing very sharp claws, and a stiff tail for support all enable a woodpecker to scale a tree much as a mountain climber wearing crampons does. Its face mask takes the form of many fine bristles that extend over the base of the beak and cover the nostrils, filtering the tiny bits of wood it inhales as it hammers into a tree.

Twenty-one of the world’s 175 kinds of woodpeckers breed in the United States and Canada, and seven species are known to nest in Door County. The only other species that breeds in Wisconsin, but not in Door County, is the black-backed woodpecker, which nests in seven or eight far-northern counties in our state.

Search practically any environment where trees grow in the United States — with the exception of deserts — and your chances of seeing downy woodpeckers are very good. My late husband, Roy, and I came to live in our upland hardwoods in November 1982, moving into a newly built, two-story home on the first day of the annual gun deer hunt.

Both adult males have red feathers at the back of the crown. The downy has a solid red patch; the hairy has a thin, black, vertical line in the middle. The females of each species look alike. Newly fledged males have red feathers at the front of the crown instead of the back. They are nonmigratory and stay in their home territories throughout their lives.

Our new house had western cedar siding that apparently wasn’t totally dried. After a few years, a small amount of shrinkage allowed many cluster flies to gather among the boards. By the time we had been living there for about nine years, the hairy woodpeckers had drilled many holes into the siding in search of the flies. Eventually the siding was removed, and now the aluminum replacement is woodpecker-proof.

It was near the end of our first summer living in the house that a new species arrived at the feeders — one that we had never had when we lived at The Ridges Sanctuary’s range light. It was a male red-bellied woodpecker. The birds had been expanding their range northward and were recorded on several Christmas bird counts during the 1960s and 1970s.

It was the middle of February 2005 when a very unusual bird landed on our suet feeder. It seemed to make itself very much at home, and Roy was able to get some photographs. It was a female red-bellied woodpecker, but all the feathers that were supposed to be red were yellow — apparently just a genetic abnormality.

Red-bellied woodpeckers are very dominant at the feeders, so the downy and hairy woodpeckers leave quickly when a red-bellied lands near them. It’s also a challenge if a red-headed and a red-bellied are trying to eat at the same feeder because both tend to be quite powerful in assuming territorial supremacy, but usually the red-bellied wins.

Years ago, the red-headed woodpeckers were more common and could often be seen along country roads as they landed on the wooden power poles. Since the increase in the red-bellied species, there are fewer red-headed woodpeckers in Door County. One major factor is that the red-heads usually migrate to the south while the red-bellied species stay here all year. Another detriment is the great number of European starlings competing for nest holes.

Both species are confined to the eastern half of the U.S., and the red-headed usually spends the winter in the southern half of its breeding territory. The striking difference — other than the completely deep-red color of the entire head of the red-headed woodpecker — is evident when viewing them from the back. The red-bellied is in the group called ladder-backed because of the narrow, horizontal, black-and-white feather pattern. The red-headed species has a solid-black upper back with white wing feathers, a black tail and white breast. It’s easy to identify the males from the females in all woodpeckers except the red-headed, in which both sexes look alike.

We had a family of red-heads stay in our woods one winter. The youngsters had gray heads instead of red because the red feathers would grow in during the following spring, at the start of their second year. We have had a red-headed woodpecker eating the marvel meal in the front yard in only about three of the last 20 years. It may be that the feeders are too deep into the woods; red-heads like a more open woodland and its edges.

Another migratory woodpecker that nests in Door County is the northern flicker. We built a nest box for them years ago and nailed it on a large basswood tree. We never knew whether northern flickers used the box, but a few years later, we discovered that a pair of American kestrels was successful in raising a brood of youngsters there.

Flickers do more feeding on the ground than most woodpeckers, probing the soil for insects and ants. The old name for our variety was the yellow-shafted flicker, and there is a red-shafted flicker in the northwest United States and far-western Canada. In the central part of the country, they can interbreed to the point where their feathers might be pink or yellow. A good field mark is seeing the large, white rump patch as they fly away.

Northern flickers have a long, barbed tongue — as do most woodpeckers — so they can probe deeply into ant hills. There is a sticky substance on the tip of the tongue that snatches the ants and other ground-dwelling insects. One study found that a flicker can eat 5,000 ants in one meal.

Male woodpeckers try to attract females by “drumming” on hard objects to announce their territory and dominance. I remember Roy telling of having to get up at dawn once to answer the phone. It was in the spring, and he was living in the Upper Range Light at The Ridges Sanctuary. When he picked up the phone and heard a dial tone — but the “ringing” sound continued — he realized it was a male flicker hitting the metal ridgeline on the roof with vibrations that made it sound like the ringing phone!

Both sexes have a slightly yellowish belly, a black bib below the chin and a rather mottled back, so they blend in well with the blotchy bark of the sugar maple trees. In fact, the maples play an important role in the lives of yellow-bellied sapsuckers.

This “well-drilling” bird has the uncanny ability to bore extremely uniform rows of holes, few deeper than three-eighths of an inch, into various kinds of trees.

A sapsucker’s brushy tongue is perfectly suited for lapping up the tree sap that oozes from the symmetrical holes, which are somewhat square. These wounds are deep enough to penetrate the living, nutritious cambium, which is also consumed by the bird, as well as the sap that leaks through the holes. After a sapsucker has visited these holes, we have seen black-capped chickadees examine them, too, looking for sap and insects.

The last and largest of our nesting woodpeckers is the magnificent pileated woodpecker. This species is, of course, the most dominant due to its large size and formidable beak. Years ago, it was a special treat to have them come to our feeders, but now, with both suet blocks and marvel meal put out for them, they make several visits per day.

The male has red feathers from the top of the beak all the way to its crest and has red in the horizontal cheek line. The female has a red crest, but the crown is dark brown or black, and her cheek patch is black.

They are about 16.5 inches long compared to our smallest, the downy, which is about 6.5 inches. The crow is 17.5 inches, so you can say that the pileated is roughly a crow-sized woodpecker.

Many people wonder how they can save a tree that the pileated has chiseled into, but such a tree is beyond saving. Woodpeckers have such acute hearing that they can detect insect activity in a tree and carve out an entrance to get the creatures for a meal.

Without question, we are thrilled every time we see the unbelievably large pileated woodpecker — or the “good god woodpecker,” as some call it. We eagerly await the migrating woodpeckers — the flicker, the red-headed woodpecker and the yellow-bellied sapsucker — to return in the spring for nesting and to join their four permanent-resident partners in nature. How fortunate we are to have seven different species of these amazing birds with us during the summer — especially those of us who now have aluminum siding on our homes!