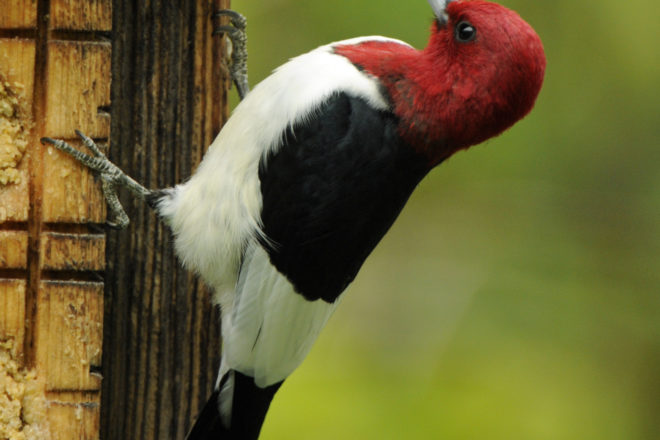 This beautiful red-headed woodpecker is ready to get a beakful of marvel meal. Photo by Roy Lukes.

The emerald ash borer, which has been invading and killing most of the large ash trees, has been a benefit to the woodpecker population. The birds find the beetles in the bark and strip off sections as they devour them. This invasive beetle was first found in southeastern Michigan only 20 years ago, and it has since killed so many trees in the upper Midwest.

I’ve noticed that the woodpecker numbers have increased over the past few years. My upland hardwoods have many permanent residents of downy, hairy, red-bellied and pileated woodpeckers.

The red-bellied species was not common here in Door County until well into the 1970s. It has been moving up from the south and is now a well-established permanent resident. We first learned of the species when it was seen during a Christmas bird count in 1977, but it didn’t become numerous until about 10 years later.

There is an interesting “pecking order” with woodpeckers at feeders. The largest ones – the pileateds – dominate, and it used to be that the red-bellieds were next in the order. However, this summer I’ve had a pair of red-headed woodpeckers nesting in my woods, and I’ve seen that when they come to the suet or marvel-meal feeders, they push out the red-bellied species.

So, it’s pileated, red-headed, red-bellied, hairy and then downy in the pecking order of the woodpeckers eating food. The two other species of woodpeckers living and nesting here are the northern flicker and the yellow-bellied sapsucker. Flickers sometimes use the bird baths, but they rarely come to eat any of the normal bird food. Sapsuckers eat suet early in the spring if we’re experiencing a cold spell.

The three species of our nesting woodpeckers that normally head south for the winter are the red-headed, the northern flicker and the yellow-bellied sapsucker. I remember one winter during the 1980s, however, when we had a red-headed woodpecker family stay for much of the winter. The youngsters are easy to identify because their feathers are only white and shades of gray. The intense black, white and deep-red colors do not develop until their second year.

There have been winters when people had a flicker stay at their feeders. We have had one or two recorded on our Christmas bird counts in the Sturgeon Bay and Brussels areas seven to 10 times during the past 24 years. One yellow-bellied sapsucker was seen on the Sturgeon Bay and the Brussels count in 2003, and two were seen during the Brussels count in 2017.

I have many bird field guides dating back to 1966 and up to 2000. It’s interesting to see how the name of the yellow-shafted flicker has changed to common flicker and now to northern flicker. Our local population has yellow feather shafts, which are easily seen if the bird flies overhead.

Out west, there is the red-shafted flicker. In a few areas of the eastern or central plains, the two may interbreed and produce varying colors under the wings. The yellow-shafted breeds in a wider range into far northwestern Canada, but it’s restricted to the eastern half of the United States.

Yellow-bellied sapsuckers prefer to nest in mixed deciduous and coniferous forests and choose living birch, poplar and aspen trees. They breed across Canada, through the northern half of the United States, and out to the East Coast. Most spend the winter from the southern half of Illinois east to Virginia, and down to the Gulf Coast and into Mexico.

Red-headed woodpeckers like to nest in deciduous woodlands, especially where beech and oaks are common. I’m sure my red-heads are raising a second brood. They commonly do that when the food is good where they’re breeding. The emerald ash borer may have influenced this species because red-heads prefer to create nesting cavities in dead trees that have no bark, such as the larger ash trees.

This species breeds in all of Wisconsin, southern Canada and eastward to the western half of New York state. They migrate south to the Gulf states, but some may stay all winter into southern Wisconsin during a mild winter and where oaks are abundant.

In reviewing the older bird field guides, it was interesting to see that before 1980, the red-bellied woodpecker was a year-round resident only in the southern half of our state. By 1983, it was listed for the same year-round area, but it had also become a winter resident in Door County and northeastern Wisconsin.

Our wild birds don’t read guide books and will nest wherever the conditions are good. As the global climate changes, so will the distribution of wild birds. I’m glad to have many deciduous trees in my woods to attract the woodpeckers.