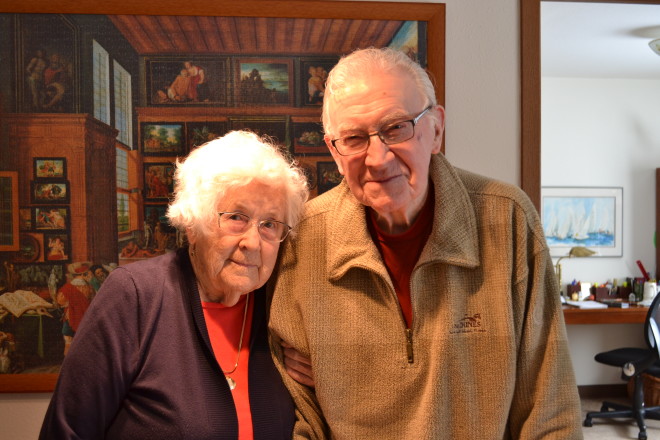 One of my favorite parts of this job is interviewing people from my grandparents’ generation – a generation that grew up during the Great Depression and found joy in the simple things: dances, dating and Sunday drives.

In time for Valentine’s Day, I caught up with two members of that generation, Sister Bay couple Richard and Bette Gadient, whose love story goes back 75 years to a dance hall in Davenport, Iowa.

“It’s kind of a funny story,” Bette starts. “I had a blind date with his brother.”

“It was a building they rented out for parties in the golf course area,” Richard chimes in.

“They always had dances on Sunday afternoon to a jukebox so we decided to meet there,” Bette says of her and Richard.

“You two?” I ask. “Even though you went on a date with his younger brother?”

“We didn’t click,” she says. “At all (laughs). The idea was that we both were going off to school. I was from Rock Island, Illinois, and he was from Davenport, Iowa, and of course the Mississippi River is in between the two.”

“Our generation danced a lot,” Bette adds. “We never jitterbugged, we couldn’t quite catch that but the swing, it was the era of the big bands. Anyway, we met at Credit Island and we danced and we talked and he went home and I went home. We did not date until we got to Grinnell College.”

They reconnected through freshmen orientation activities and dated off and on during their first year in college until Richard gave Bette his Grinnell College pin.

During the early 1940s, dates at Grinnell College consisted of open houses at the men’s halls, complete with games, music and of course, dancing.

“Everybody danced and listened to music and had some pop,” Richard said. “You couldn’t have any beer.”

After their first year in college, Bette returned to her hometown and Richard continued schooling. But they committed to a long-distance relationship and filled their weekends with trips to Rock Island, Ill., Grinnell and Moline, Ill., where the LeClaire Hotel hosted dances. They also made regular trips back to where they met: Credit Island Golf Course.

“At Christmas time, they had dances every night for two weeks,” Richard says. “The women wore formals and the men wore tuxes.”

Guests dined on potato chips and pop, and if they could manage it, snuck beer and liquor in.”

“There were certain ones who had something in their pocket,” Bette says. “And they always had a stag line – a bunch of guys who came and had no dates. It was your hope that certain boys would tap your partner on the shoulder so you could dance with them. They were supposed to be known as the best dancers of the group and if you could dance with them, why, it was like another star in your tiara (laughs).”

“You’d monitor every guy that was coming up,” Richard remembers. “Pretty soon you’d say, ‘Hey, listen, this is the third time you’ve been here. Don’t come back!’”

“Richard liked to get over in the corner where there wasn’t so much traffic,” Bette laughs.

“The dance was from 9 to 1 so my mother knew exactly how long it took to get back to the house,” Bette laughs. “Those were really fun years…that’s what we did for dating. We danced all the time.”

“We knew where we were heading,” Richard says of the early days. “When I got called up to active duty, that took care of it.”

The couple has lived in Door County since 1984.