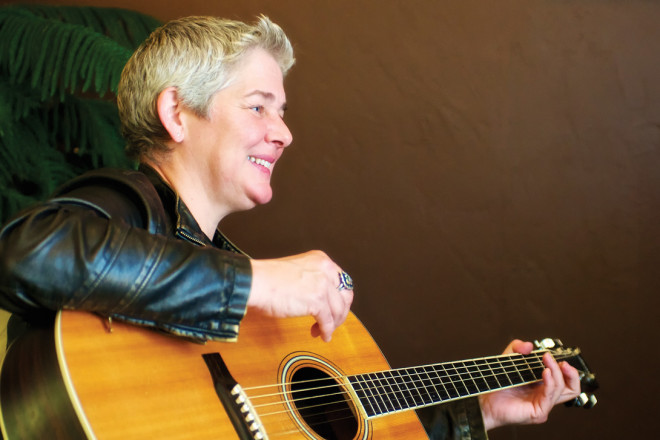 Dorothy Scott has toured with Grammy-winning Glen Hansard, played onstage with the highly-political Sinéad O’Connor, had work featured in the Sundance movie AKA and considers Carole King a personal friend.

“She has singlehandedly molded a young group of girls into a fantastic and extremely professional choir,” said Steve Quade, vice president of business and hospitality services for the Ministry Door County Medical Center (MDCMC).

The MDCMC Children’s Choir is in its second year. It consists of 10 girls learning to love singing, performing and music the way Scott does.

Scott is a self-taught musician, and began playing piano as a five-year-old. She moved on to the guitar in her teenage years, an instrument “jam-packed filled with mysteries.” She began writing songs and performing them in her 20s, fighting to get over her shyness and share her gift.

Scott first came to Door County to play at the Third Avenue Playhouse and fell for the area. She had been living in Brooklyn, playing weekly shows at the hip Sin-é café, a beacon for up-and-coming artists like Jeff Buckley. But the welcoming, artistic community of Door County drew her.

“Door County people are so friendly and so intelligent, and they love music and the arts,” Scott said.

Now, Scott spends her time between Door County and Brooklyn. This summer she’ll perform at the Women With Spirit concert at the Peg Egan Performing Arts Center in Egg Harbor, Gordon Lodge in Baileys Harbor and Harmony by the Bay in Sturgeon Bay.

But she’s not just living in Door County – she’s becoming a part of it. Scott co-founded the MDCMC Art for Health children’s program five years ago and helps write curricula that promote a variety of artistic expression from dramatic performance to painting. Art for Health is a free program meant to bring stress relief and healing to children, as well as teach them about the arts.

Although her songs come from a culmination of things – “the earth, sun, moon and stars, and people” – Door County has provided some inspiration. The candid, exhilarating song “Pass It On” was influenced by the local women and children.

Scott said she could have a life of fame if she could write a hit song. But to do that, she might have to give up her soulful, songwriting style.

But lying isn’t Scott’s style. She believes music has healing power, and that when musicians are anything except their true selves on stage they aren’t participating in the sacred relationship between artist and audience.

“When people sing a song, they’re giving a piece of themselves,” Scott said. But the listeners have to be giving some of themselves too to be part of the relationship.

In that regard, Scott’s audience isn’t missing a beat.

Scott once received a letter from a woman who had seen her perform. The woman had been diagnosed with cancer and wrote that Scott’s music touched her and gave her hope.

That kind of healing connection is just what Scott’s going for.

“Music is healing if you do it right,” Scott said. “It brings you to a peaceful place.”

Peace resonates from Scott, both in her personal life and her professional music career. Songs like “Peace Within” and “Beam of Light” prove it. Fellow musician and occasional collaborator Corky Siegel even calls her the Princess of Pre-emptive Peace.

“Her intention in playing music is to bring peace to the world,” Siegel said. “She understands that music is a medium that does that very naturally in many ways, and you can tell that when you watch her perform. She’s being carried on this wave of joy that she has no control over. It just takes her.”

And the whole audience is taken with her, Siegel said.

But Scott’s healing touch doesn’t end with her performances. She’s also raised over $3,000 for public and independent radio stations with her Peace Within project, where she collaborated with other musicians to make an album to raise the money.

“[Public and independent radio] is the true and honest voice for music, ideas and discussion, and it always needs support,” Scott said.

That’s part of the reason Scott still thinks about writing a hit song – all the good she could do with the fame and fortune.

Until she gets her hit tune, Scott will continue promoting peace with her music.

“But if there are any gazillionaires out there, load me up,” Scott said. “I can’t change the world with three chords and the truth anymore.”