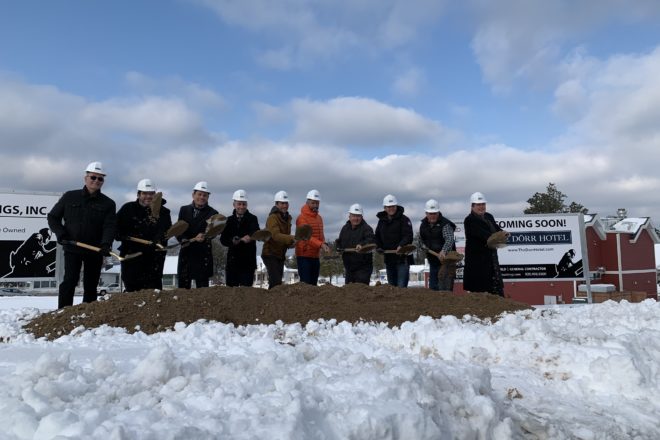 State and local officials joined developer Chris Schmeltz on Dec. 3 in downtown Sister Bay for the groundbreaking of the Dörr Hotel, a 47-unit hotel that will be built between CHOP restaurant and the Sister Bay Bowl on the site of the former Walkway Shops.

It’s the first new hotel of its size to be built in northern Door County in nearly 20 years. During that period, the village bought and demolished the 40-unit Helm’s Four Seasons hotel to expand its public waterfront, and the Sister Bay area also lost the Hotel du Nord and saw the Bluffside Motel become seasonal housing.

Schmeltz thanked the members of the village board and plan commission for their work on the project and for pushing to make it better.

“We’re excited to get started, and we’re looking forward to a good project,” Schmeltz said. He anticipates opening the hotel in early 2021. The village does not allow exterior construction during the peak season, so the bulk of the construction must occur during the offseason. Bayland Buildings of Green Bay will be the general contractor, and Schmeltz said they will try to use local subcontractors as much as possible.

The hotel will include 10 suites and 37 standard hotel rooms that will rent for $199 to $330 per night. All but two of the units will have balconies. The structure will also include two first-floor retail units that, Schmeltz said, have not yet been filled. The hotel has been assigned 52 parking spots in the village-owned lot behind the property as part of the development agreement.

Village Administrator Beau Bernhoft said the village is anticipating the project will bring in about $65,000 per year in tax revenue.

After a private developer bought the property in the early 2000s, a proposed condo and retail development stalled, and the property sat empty for nearly a decade. The village then bought it in hopes of sparking interest and controlling the parcel’s development.

“This really started 12 years ago when the community took those important steps to shape its future,” said Jim Schuessler, executive director of the Door County Economic Development Corporation.