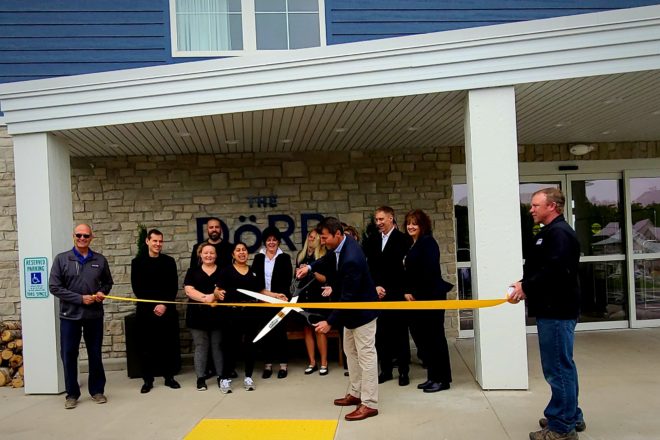 Principal Owner Chris Schmelz cuts the ribbon outside the entrance to The Dörr Hotel Thursday, May 27, marking the official opening of the first new hotel built in Sister Bay in almost 20 years. The 47-unit establishment features a modern design with cozy, lodge-like comforts. Photo by Sara Rae Lancaster.

The hotel is the first four-story structure built in Sister Bay and is expected to generate $68,000 in annual property tax revenues, according to Village Administrator Beau Bernhoft.

The Dörr and neighboring CHOP restaurant are located on the site that was once home to the Walkway Shops and Beanie’s Restaurant. The lot sat empty for more than a decade before ground was broken on the hotel in 2019.

The interior was designed by Chicago-based Aria Architects and built by Hobart-based Bayland Building.