• The Department of Transportation (DOT) has agreed to maintain the existing right-of-way between Mill Road and Scandia Road in Sister Bay.

Charles Graupner, attorney for Al Johnson’s Swedish Restaurant and Butik, sent a letter to the DOT on July 31 saying the formerly proposed 66-foot right-of-way, which could have shifted the sidewalks up to the restaurant’s walls, was too wide because the road had been laid out as just a 50-foot right-of-way.

Right-of-ways for state highways default to 66 feet unless there’s documented evidence that the road was intentionally laid out to a different width.

• After acknowledging the lack of cell phone coverage in Door County, AT&T announced it is expanding its service in Northeast Wisconsin with the purchase of 32 cell towers in Door, Brown, Kewaunee, Manitowoc and Sheboygan counties.

“Door County has been a stress point for our customers and this will really improve service up there,” said AT&T spokesperson Jim Greer.

Greer said a majority of the 32 towers are in Door County, but couldn’t give the exact location of the towers.

“We’re constantly and aggressively building our network,” Greer said. “We’ve already spent $140 million on networks in Wisconsin, and continue to do that. So that’s a lot of building, that’s a lot of investment to make better service for our customers in the state.”

• The Department of Natural Resources relaxed some of its fish consumption restrictions on waters around the state, including Green Bay. The updated fish consumption advice says it’s safer to eat smaller sizes of northern pike and white bass. For more information, log on to dnr.wi.gov. 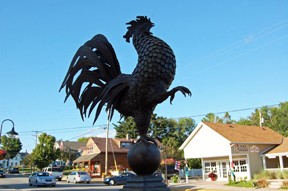 • Artist Bill Jauquet calls this steel sculpture The Rooster, but the Pulse staff suggests a name befitting its new prominence in a Door County community:  The Father of Egg Harbor. It was recently installed at the entrance to Harbor View Park and is on a five-year loan from Edgewood Orchard Galleries. Jauquet, a De Pere resident, said he is happy to have one of his last steel sculptures – he now works in bronze casting – on such public display.