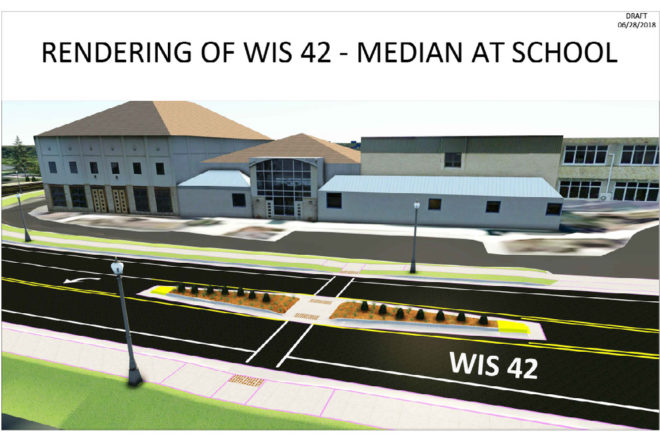 The most substantial work of next year’s highway 42 resurfacing project will take place in front of Gibraltar School. That work has now been delayed until the fall of 2019.

1/16/18: Editor’s Note – This article has been updated with new information from the Department of Transportation.

The Wisconsin Department of Transportation (DOT) threw a curveball at the Town of Gibraltar to start the new year, changing the timeline for major highway reconstruction scheduled for 2019.

The DOT said that only one bid was submitted for the work and came in much higher than expected. The DOT will put the project back out as two separate bids in hopes of attracting more bidders and lowering costs. Previously all work was slated to begin in March, with a hard closure just north of the entrance to Peninsula State Park in March and April. The new timeline calls for the first work to begin in May, starting with the Highway 42 segment from north of the Fish Creek YMCA to Sister Bay.

The priority for that work will be the sections in Ephraim, which must be completed before Fyr Bal Festival in mid-June.

That rest of that segment if not completed by the end of June would be completed in October, with no work done between July 4 and Labor Day.

The more disruptive work in Fish Creek, including the stretch from the entrance of Peninsula State Park to the Door County Y, is now slated to begin in the fall, with a completion date in spring of 2020.

In a press release the DOT said it “remains committed to avoiding major construction during the busy tourist season in Door County.”

The DOT has not determined what the fall start date will be. Construction in September and October would be much more disruptive to tourism than in March, April and May, and a hard closure on Highway 42 could be extremely difficult for visitors to navigate on busy fall weekends.

Doug Kirst of the DOT said the plan is to start that work in mid-to-late October, not before Fall Fest weekend.

“Our board has impressed upon the DOT that we would prefer that work begin late in the fall, but we can’t yet say when it will happen,” Skare said.