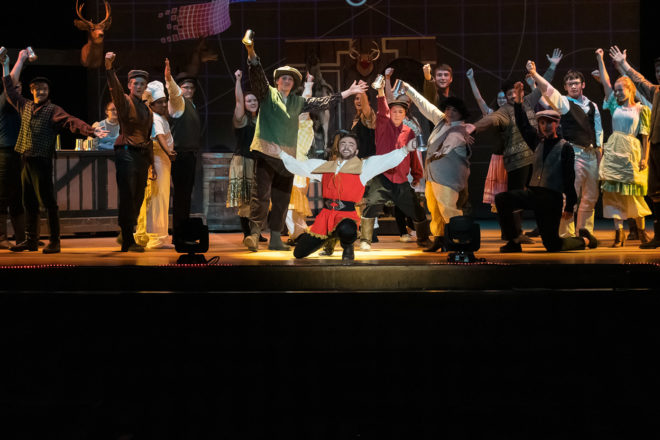 Learning lines and music for a lead role in a school production is not an easy feat – especially when students are trying to balance that work with school, jobs and home life. Now imagine learning a character’s lines and songs as well as the music, dancing, blocking and cues of the ensemble.

This is what the Southern Door High School (SDHS) cast and crew attempted for their production of Disney’s Beauty and the Beast musical. Unlike the school’s usual shows – or those of any other school in the county – SDHS decided to double-cast its 50th show. Double-casting means that two students play the same lead role and alternate their performances. This allows more students to be involved, but it also creates more work for the cast, crew, director and volunteers.

The double-cast roles include Belle, the Beast, Gaston, LeFou, Cogsworth, Lumière and Mrs. Potts. I attended the Nov. 4 dress rehearsal and watched Mackenzie Finger (Belle), Brady Tooley (the Beast), Reece Robillard (Gaston), Anna Alrand (LeFou), Suhani Patel (Cogsworth), Austin Alexander (Lumière) and Ella Wienke (Mrs. Potts) perform. If I were to attend on another night, I would see the same show with a different lead cast.

After the rehearsal, I had a quick conversation with drama director Catrina Williamson about directing a double cast. While talking to her, I was amazed by her work as a director and the dedication of the students. On nights when the students aren’t playing their lead roles, they join their fellow actors in the ensemble doing group dances, scenes and moving around the set pieces. And to help with the transition from man to beast, both actors playing the Beast (Tooley and Dale Swanson) portray the prince during performances they’re not playing the Beast.

While the actors must contend with learning more lines and music, the director and her crew must adjust everything else to fit the double cast, including twice the costumes and more.

Normally when casting a show, a director seeks the best talent for the roles but also chooses people who have great chemistry, especially for romantic plots. Throughout rehearsals, Williamson said they tried different combinations of students and didn’t finalize those combinations until mid-October. In addition, during many rehearsals, she directed both actors who had the same lead role as they worked side by side. During others, she ran scenes more than once with the different students.

In addition to the double cast, this year’s production features a live orchestra comprising students and community members and the added element of scenic projections. The set design is minimal, using only a few moving pieces that have multi-scene use. The projections hadn’t been programmed when I was there, but I did get a peek at one. Not only will the projections serve as the backdrop, but the images are animated and lively, so they’ll blend in well with the action on stage.

This year’s decision to double cast created some challenges for the director, cast and crew, but all involved stepped up to create a fun family show. I recommend seeing two shows to enjoy the hard work by both casts!

Disney’s Beauty and the Beast features Mackenzie Finger and Jadacey Teska as Belle; Reece Robillard and Wilian Perez-Munguia as Gaston; Anna Alrand and Theresa Kaser as LeFou; Suhani Patel and Elizabeth Bretl as Cogsworth; Austin Alexander and Matthew VanderMeer as Lumière; Ella Wienke and Jenna Thiry as Mrs. Potts; and Brady Tooley and Dale Swanson as the Beast.