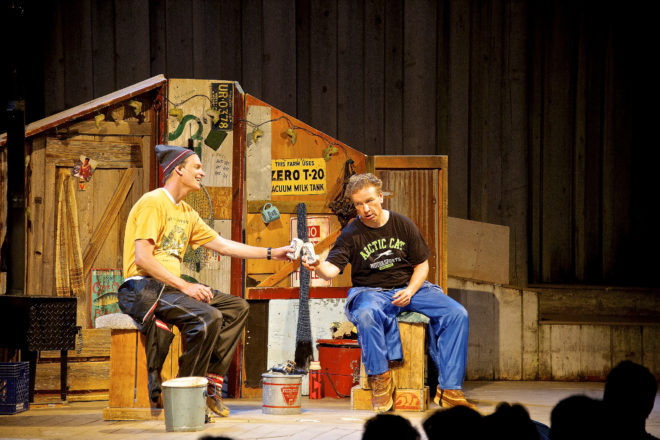 Doug Mancheski, right, will be in the Green Bay Community Theater’s presentation of ‘Guys on Ice.’ Photo by Len Villano.

The hilarious comedy will charm your wool socks off as Marvin and Lloyd sing about life, love, and the one that got away while keeping warm with a healthy appreciation of good bait, cold Leinies, and the Green Bay Packers.

Audiences across Wisconsin and the country have enjoyed this whirlwind ice-ﬁshing tale, gaining insight and laughter from the two buddies as they extol the attributes of a snowmobile suit one moment and plan to romance the checkout girl at the local grocery store the next. The story follows Marvin as he anxiously awaits his opportunity to appear on a cable TV ﬁshing show which he believes will make him a household name; while his buddy, Lloyd, ponders a recent squabble with his wife concerning plans to spend their wedding anniversary at Lambeau Field watching the Packers play the Bears. A fellow angler — Ernie the Moocher — pokes his head in the shanty now and then; always out for a beer or a stick of jerky, much to the dismay of the pals.

Since 1998, Guys On Ice has played to sold-out houses in Fish Creek, Sturgeon Bay, Eagle River, Green Bay, Milwaukee and Madison and played for audiences as far away as Oregon, California and New York.

Tickets are $25 (plus a $2 fee). Tickets are available at gbcommunitytheater.com or by calling 920.435.6300. Robert Lee Brault Playhouse is located 122 N. Chestnut Avenue in Green Bay.