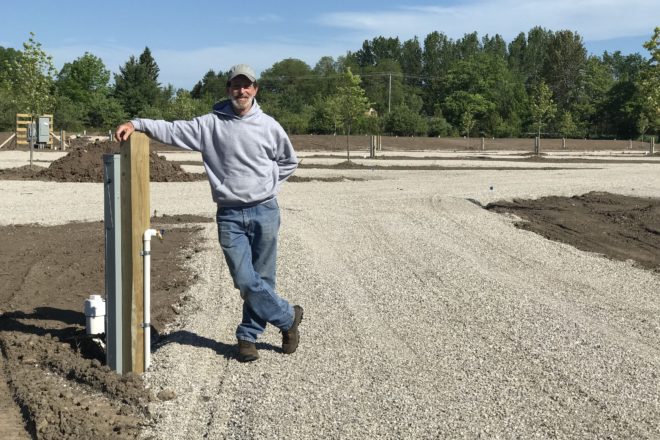 Terry Wurster stands in his new Dovetail Acres Campground, a business he owns with his wife, Linda. The 23-acre campground is expected to open around July 1. Photo by D.A. Fitzgerald.

Tucked behind Dovetail Trading in Liberty Grove off Highway 57 is the new, 23-acre Dovetail Acres Campground, an RV park.

“It’s not a trailer park,” said Terry Wurster, who owns the campground with his wife, Linda. “A trailer park implies that people are here year-round. We’re not doing any type of full-season rentals or storage of trailers here in the off-season.”

The campground has 60 RV sites. An additional 10 tent sites are scattered along the ridge and will be “nice and private and have elevation and good drainage,” Wurster said.

They waited out rain delays last year, starting development in August 2019. Fast-growing elms and maples have been planted around the property. The campground amenities include a bathhouse with showers, and the sites are all equipped with Wi-Fi, water, sewer and 50-amp power.

“It’s state of the art for an RV campground,” Wurster said.

He said he’s a career waiter; Linda is a retired nurse; and they had purchased the property – which sits west of their log home – from Linda’s parents. When the gas station/convenience store/car wash west of the campground off Highway 57 went bankrupt in 2012, the couple bought it and renamed it Dovetail Trading.

“And so a 45-year career waiter became a gas station owner,” Wurster said. “We bought the gas station in the middle of a recession and knew absolutely nothing about running a gas station.”

They’ve learned a lot since then, and their plans seem to be fitting as snugly as the dovetail log joint after which they’ve named their properties. Their goal is to open the campground July 1 once the final power lines are run, the grading is finished and the sites are spruced up with landscaping, tables and fire rings.

The development required a conditional use permit from Door County and approvals from the Town of Liberty Grove – a lengthy process that included four hearings and two final votes, and ended last May.

“I’m very proud of the fact that we did not have a negative vote, and we received no hostile feedback from anybody,” Wurster said.