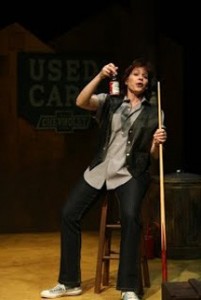 Berg portrays dozens of unforgettable characters that drifted through her working class neighborhood in the ‘60s and ‘70s in Blue Collar Diaries. Their personal stories go far beyond the names that are stitched above their left breast pockets.

This original one-woman show features stories that will make audiences appreciate the countless people whose greatest assets were not tucked in a bank vault or a lavish home, but were instead poured into the modest streets and houses they lived in everyday.

A classically trained actress with a BFA from the University of Minnesota – Twin Cities and graduate work at the American Conservatory Theatre in San Francisco, Berg has appeared on various stages throughout the Twin Cities including the Park Square Theatre, Cricket Theatre, Frank Theatre, History Theatre, Actorsʼ Theatre Old Log Theatre, Theatre Unbound and more. Locally she has appeared in Door Shakespeare’s production of Pride and Prejudice. This is her first appearance at the Third Avenue Playhouse. For more information visit thirdavenueplayhouse.com.