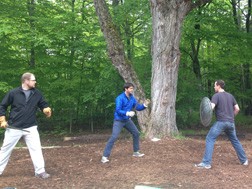 Dan Klarer woke up with fighting on his mind. He envisioned various scenarios, swipes, swings, and spins between two characters of William Shakespeare’s tragedy King Lear.

With little stage direction from Shakespeare other than, “They fight,” and a few ideas, Klarer loaded a wooden box of broadswords, daggers, and shields in his car before driving to The Garden of Door Shakespeare near Baileys Harbor. Handing actors Charlie Wright, who plays Edgar, and Dave Folsom, who plays Edmund, the weapons – the trio started fighting, very slowly.

Klarer sets them a safe distance apart and choreographs a realistic, intense fight culminating in a punch to the stomach, a ‘pop,’ as Klarer calls it. “It’s all about targeting,” says Klarer, “and just getting the actors comfortable and trusting each other.” There is some hesitance on the actors’ part and some coaxing from Klarer.

“When you punch someone in the stomach martially in the real world you want to punch through their body, because you want to hurt them,” he explains, “in stage combat, we don’t actually want to hurt our partners, so it’s the idea of not so much pulling the punch, but that target is on the surface, not behind.”

Soon Wright and Folsom are swinging and thrusting, ducking and diving, grunting and moaning. “Acting is a huge component to all fighting and a fight class is very much an acting class, because it is a life or death situation, it is the most heightened part of acting and emotion,” says Klarer. “Broadswords and shields are gritty, dangerous – both to the audience and the characters – it’s a bashing weapon, it’s a protecting weapon, it’s a thrusting weapon, it’s loud, it’s animalistic, which is what we are going for in this production.”

Klarer as a fight choreographer also teaches actors how to slap, pinch, and fall safely. “I’m trying to give them a toolbox of ‘here’s how you slap,’ ‘here’s how you grapple, manhandle each other in a same manner,’” he explains.

The actor, who has appeared in numerous productions throughout Door County, including American Folklore Theatre’s Victory Farm and Third Avenue Playhouse’s SantaLand Diaries, took his first stage combat class in 2007 at University of Wisconsin – Stevens Point. “My first class was awesome!” says Klarer who went on to participate in the Wonderland Workshop in Geneva, Illinois, the largest regional stage combat workshop in the U.S.

“There is like a million classes that have everything from basic footwork classes to advanced small sword classes to Captain American shield and fist classes,” says Klarer. “They’ve done classes where you pick apart an old ‘80s movie fight. It’s a huge range.”

Now Klarer has the ability to teach actors of diverse backgrounds how to engage in something they may know little about – stage violence. “I do a lot of theater movement styles,” he explains. “There is a lot of ‘within’ teaching – sometimes they are dancers or they’re acrobats and you can draw parallels between the two, help them understand more. A lot of times I’ll say, ‘Imagine you are holding a beach ball all the time and your weapons are there and you have this nice frame, because if you can’t see your weapon, it’s dangerous.”

Klarer draws on the reference while teaching Wright and Folsom how to safely bash and swing the heavy swords and shields. And though he has a variety of routes he could take the actors down for a lengthy, flashy fight, he often opts for shorter fight scenes. “A – it’s more realistic and B – it just creates a tension that doesn’t leave. The anticipation is there and then if you drag it out and you have too long of a fight – it’s cool – but you get past that peak,” explains Klarer. “You want to find where just over the peak is. We want to keep the audience with us the whole time, which is why we rehearse very slowly and keep everything safe, to make sure the audience sees what is happening.”

By the end of the rehearsal, Wright and Folsom confidently deliver their lines while bashing swords, in fact, you see the characters’ relationship change during the altercation. “To be able to further the story through fighting is such a thrill for the audience,” says Klarer. “It expands the story but also expands the theater experience because it’s not just Shakespeare lines – it’s lines and fighting and emotion – it heightens everything.”

For more information about Door Shakespeare and show times call 920.839.1500 or visit doorshakespeare.com.