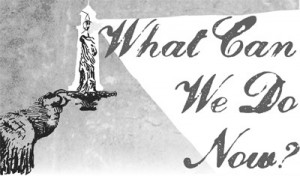 While it’s obviously necessary to think about the future of Lake Michigan and whether or not there’s any way it can bounce back from its current low, lakeshore communities also need to think about what they can do right now to keep their water-strapped marinas open.

For a lot of them, that means it’s time to dredge.

Just south of Door County, the City of Algoma recently wrapped up a dredging project at its marina, where a crew removed 15,000 cubic yards of built-up sediment. The project, which was approved in December and completed in February, cost the city $192,000, a large amount of which was not previously budgeted.

“We had to borrow money to make it happen because the marina is vital to our economy,” said Algoma Administrator Thomas Reynolds. “The water kept dropping and it was a real problem, so we decided to do it.”

Algoma undertook another large dredging project in 2010, which cost the city about $350,000, placing the city’s total dredging bill over the past three years at over half a million dollars. The city looked for grants to apply for to offset this year’s cost, but Reynolds said there aren’t a lot of grants available and most are aimed at commercial marinas, not recreational ones like Algoma’s.

“Other states, like Michigan, have released state money to help commercial and recreational harbors. Wisconsin needs to do something similar because this is an emergency for communities on the lake. So we’re asking the state to help us,” said Reynolds.

Algoma has started an on-going letter writing campaign, looking to reach both state and federal representatives to urge them to find more funding for this sort of emergency dredging. Thomas said at the federal level the city is asking officials to properly budget maritime trade taxes that should be going into the Harbor Maintenance Trust Fund, money that has instead been going towards general government expenditures.

Thomas said the letter-writing campaign has already “received some response,” citing a proposal in the state budget that talks about loans for these sorts of dredging projects.

But that’s not really good enough.

“What we really need is a grant because we can already get loans,” said Thomas.

The stakes in Algoma are high. The city’s marina has 50 seasonal slips, and hundreds of boats launch from it each summer. Thirty-five charter boats, which bring hundreds of tourists into town, operate out of the marina.

“If we didn’t dredge these past couple months, our marina would not be open this summer,” said Thomas. “But we are going to be open, and we’re going to have a successful fishing and boating season in Algoma.”

Meanwhile, further north on the peninsula…

In Baileys Harbor, town officials and local residents are having similar trouble with their marina, and have been for the past several years. Just like in Algoma, a constant build-up of sediment combined with low water necessitated a new round of dredging this year, the fifth consecutive year dredging has taken place at the marina.

“It’s a no brainer that we have to spend money down there,” said Town Chairman Don Sitte at a March 27 meeting of the Baileys Harbor Town Board. “It is what it is.”

This year’s dredging cost the town $74,451. While contractor Harbor Construction had originally estimated the cost to be $44,900, additional dredging became necessary as sand from inside the marina filled in the dredged area at the mouth and lake levels continued to drop.

“By the time the construction started the lake was probably six inches lower than when we did the original soundings,” said Town Engineer Steve Parent. “So to get the four to five feet of water meant that some additional dredging took place.” 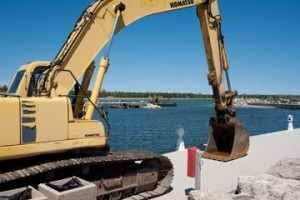 Dredging the Baileys Harbor marina cost the town $74,451 this year. Crews moved 3,031 cubic yards of material out of the harbor – almost enough to fill an Olympic sized swimming pool. Photo by Dan Eggert.

Harbor Construction ended up moving 3,031 cubic yards of material out of the Baileys Harbor. The original projection had come in at 1,700 cubic yards.

“I just didn’t see any way to get the marina operable this spring other than dredging [the 3,031 cubic yards],” said Parent. “It’s an unfortunate thing with the lake levels as low as they are; the cladophora inside the marina; and the sand harbor that moves. It’s just an ongoing battle.”

Resident Bob Bultman of Restore Door Ecological Services has taken on the job of looking for outside funding for the near-constant dredging.

“We know we’re in a depositional zone. It wasn’t so bad when the water was high,” said Bultman. “The water’s low, so it’s an exacerbated problem.”

Bultman said the town would have to proceed with a sediment study to map the shifting sands of the harbor before any government agency would consider a grant for a redesign or other engineering work at the marina. He applied to the Wisconsin Coastal Management Program to receive a grant to conduct the study, but the project was not approved.

“That’s definitely something that’s still in front of us, is to get a sediment study,” said Bultman. “Dredging funding is not easy to get. When you listen to the projects that come before Wisconsin Coastal Management … they don’t fund a lot of dredging.”

Bad for governments, bad for business

For Todd Haleen, owner of First Choice Charter Fishing and Lakeshore Adventures in Baileys Harbor, having an operational marina to work out of is essential.

“We have this great marina, but it’s filling in. That’s a huge problem for my business,” said Haleen. “If the water keeps going down, how far can you dredge? You can’t dredge out into the middle of the harbor.”

Haleen’s already had trouble getting his boats in and out of the Baileys Harbor marina, and they’ve been damaged when they’ve run into the bottom.

“My boats need about four feet of water to travel in and out of the marina,” said Haleen. “We’ve been at or below that level every year for the last five years.”

Haleen worked with the town on the logistics of this year’s dredging, and he’s hopeful that a solution to the problem can eventually be found.

“I’m kind of hoping that grant money or research into how to fix that problem will shed some more light on it. Really I’m hoping the water level itself is more cyclical, but that’s more wishful thinking” said Haleen. “[The marina] really generates a lot of money for Baileys Harbor because fishing is our big thing, and it continues to be our thing. It seems like every year it’s ‘How are we going to maintain this so we can keep going?’”