When Lake Michigan water levels plummeted in 1999, a new sign of spring became familiar on Door County’s shores – the barges and shovels of dredging equipment used to dig channels to marinas and private piers.

While most of us never see the dredging once the equipment is gone, aerial photos of the peninsula’s shoreline show a shorefront dotted with artificial channels. 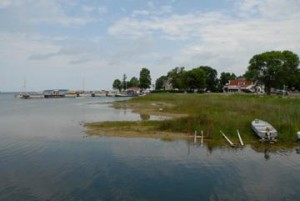 When Lake Michigan water levels plummeted in 1999, as shown in these photos of the shallow Ephraim harbor in 2008, the dredging of artificial channels for access to piers and marinas became a widespread practice.

In all, the Wisconsin Department of Natural Resources has identified 367 artificial channels dredged in Door County, most of them north of Sturgeon Bay. While dredging has always been necessary at times to keep access available to some docks, the drop in lake levels led to a large increase in the dredging applications filed with the DNR and a new concern for the impact it was having on the lake environment.

The DNR released a study on the effects of the dredging this spring, and it expressed concerns about the long-term, cumulative impact on the lake ecosystems. The study was initiated in January of 2008, and a moratorium on private dredging was enacted until it was completed.

“With the low water levels,” said Carrie Webb of the DNR, “it was a critical time to further study the impacts of this type of dredging to help ensure that the department was making permit decisions that did not interfere with the rights of the public.”

“We want people to think about alternatives to dredging,” she said.

Among those alternatives are tracking and pulley systems, and lifts, to get boats into deeper water to launch, rather than digging a large channel. Also suggested is a more common sense measure, such as sharing channels and launches with neighbors or using municipal marinas to launch rather than dredging for every pier.

While each channel represents a relatively small slice on the massive lakebed of Lake Michigan, the DNR study said the total number of trenches dug into the sand and rock could alter fragile ecosystems.

The study focused on private dredge channels, typically 30 feet wide extending from shallow water near shore to depths needed for navigation. It found that there were “biological impacts to the near shore area of the shoreline where these channels were dredged,” called the littoral zone. Those shallow water areas provide spawning, nursery, and life-sustaining functions for aquatic organisms. The study further concluded that, “at all the sites, dredging harmed the natural habitat.”

But some in the dredging industry, like Mike Kahr of Death’s Door Marine in Ellison Bay, say the DNR is confusing “change” with “harm.”

An evaluation of the DNR study completed by EA Engineering, Science and Technology of Deerfield, IL for a group of Riparian Owners and Marine Contractors criticized the study as incomplete. The evaluation pointed to findings of increased vegetation at most dredged sites as an indication of improvement to the habitat.

“We can actually make it better in some cases, and they never discussed that aspect of it,” Kahr said.

Webb said more vegetation is not necessarily good, however. The study also discovered more silt and fewer types of macro invertebrates near dredged areas, rendering some or all of the dredged area unsuitable for fish spawning.

Kahr fears the study will be used to dictate policy, but Webb said it wouldn’t result in any immediate changes to rules and regulations for pier owners or builders.

“The intent is to be advisory, something used to review applications for dredging,” she said. “All it says is that the surge in dredging has the potential to have impacts, but it’s not black and white at all.”

Mother Nature could quiet the argument.

Lake Michigan water levels are up about 10 inches over last year, but remain about eight inches below historical averages. If levels continue to rebound, the county could return to the days when dredging was far less common and little more than a handful of dredging applications were filed each year.