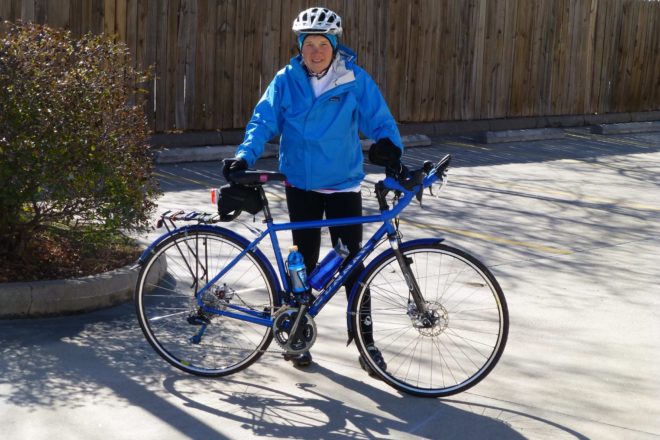 Lou Branham was an avid cyclist familiar with Door County roads. She was on a 60-mile bike ride when she was struck and killed by a vehicle on County A July 22, 2017. Submitted.

Seventeen months after a crash that killed 74-year-old cyclist Lou Ella Branham, the driver of the truck that struck her has been charged with homicide by vehicle after a blood test detected two controlled substances were in driver Jeffrey Lautenbach’s system at the time of the crash.

On July 22, 2017, Branham was turning north onto County Road A from Juddville Road in the Town of Gibraltar at approximately 4:30 pm, July 22, 2017, when she was struck by a linen truck driven by Lautenbach.

At the time the Door County Sheriff’s Department said the crash was caused by Branham when she failed to stop at the stop sign. The initial accident report stated that drugs and alcohol were not factors in the crash, nor was distracted driving, though Lautenbach told officers he had smoked a joint the night before. Lautenbach’s cellphone was not examined.

But a blood sample taken after the crash and tested by the Wisconsin State Laboratory of Hygiene found that Lautenbach had two controlled substances in his system at the time of the accident, marijuana and Clonazepam, a Schedule IV controlled substance used primarily to treat seizures and panic attacks. Lautenbach does have a prescription for Clonazepam.

Chief Deputy Patrick McCarty said after the accident that the department had to rely on Lautenbach’s statement after the accident due to the state of the crash scene. Normally police would use a total station, a device used by engineers to perform site surveys, to measure the scene and determine the speed of vehicles involved in a fatal crash. However, responding officers determined that it wouldn’t be of use due to the lack of road markings and the fact that the truck and the bicycle were no longer in their post-accident locations.

“One of the difficult things with this accident is that everything was moved,” McCarty said. “And there weren’t any visible marks on the road to make determinations from. In this situation the vehicle was moved, the victim was moved, and the bike was moved.”

Lautenbach pulled his truck over to the side of the road after the accident, so officers were unable to determine where he came to a stop, and no brake marks were visible at the scene.

But a crash reconstruction performed later by the Wisconsin State Patrol used photographs taken from the scene depicting the debris field and final landing spot of Branham to try to determine the speed Lautenbach was traveling. That reconstruction determined Lautenbach was traveling at 57 mph upon impact with the cyclist, with a margin of error of 14 mph due to the lack of documented evidence from the scene.

Branham, an experienced cyclist who biked more than 10,000 miles per year, was tracking her ride with a GPS device. That device showed that she slowed to a maximum speed of 1.1 miles per hour at the stop sign before proceeding into the intersection. The debris field and her final resting spot indicated that she was likely nearly across the southbound lane when she was struck on the back third of her bike, sending her 61 feet south of the intersection.

A status conference for the case is scheduled for Feb. 14.