In 1965, a group of Ephraim business people gathered at Henry and Jane Shea’s Village Green Motel to discuss a proposal from Tom and Mally Mayhew that the village sponsor a festival to celebrate Midsummer’s Eve.

The Mayhews, owners of Knudson House, were already holding such a celebration for their guests, based on old Norwegian customs. Others in attendance – Bill and Helen Sohns from Sohns’ Market, Laurel and Floyd Knudson from Evergreen Beach Hotel, Ted Hoeppner from Hotel Ephraim and Lloyd Olsen from Pine Grove Hotel – agreed that it should be expanded throughout the village to welcome summer and the visitors it brings to the shores of Eagle Harbor…and to promote business.

It started small. The group felt it was important to name a chieftain, someone who had contributed to the life and progress of the village, and Ruth and Ranny Nelson, who owned South Shore Pier, volunteered to bring him (always a “him” in those days) across the harbor by boat. Leon Statham of Statham Enamels made medallions for the early chieftains, and Glenn Gerdman volunteered as photographer. Joyce Gerdman taught a group of young girls Norwegian songs and folk dances, with help from Dorothy Halvorson, and they performed in traditional black skirts, white blouses, red vests and hats. In the early years, they danced on the back of a flatbed truck strewn with evergreen boughs. Employees of the local hotels rode on humorous floats, and the Nelsons sponsored paddle boat races from their dock. 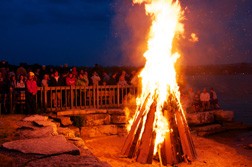 There was food a plenty. Norman and Roger Larson were boil masters for fish boils at the Village Hall, and a meatball dinner was also served there. The local fire department held a brat fry, the Moravian Church conducted a bake sale, and the Cherry Pie Wagon sold pie by the slice. Kay Wilson kept everything running smoothly. Charles “Chick” Peterson designed the festival banners featuring a red Fyr Bal on a white background that were sewn by Diane Jacobson and hung on the village hall. Ted Hoeppner and Jerry Cox were early emcees for the events.

Those folks who started it all would surely be amazed to see what’s planned for this weekend’s semicentennial of Fyr Bal (the Norwegian word for bonfire, pronounced fear ball).

The grand finale on Saturday at 8:30 pm is the arrival of the 50th Fyr Bal Chieftain, accompanied by Viking guards, traveling across the harbor in a boat decorated with Viking shields. He (or she) will be crowned by the 2013 Chieftain, Hedy Heise, don the traditional blue, fur-trimmed robe and receive the Chieftain Medallion designed by John Balistreri of Balistreri Fine Art. As in every year since 1965, the new Chieftain will light the first bonfire, and other fires along the shore will spring to life, driving out the witch of winter.