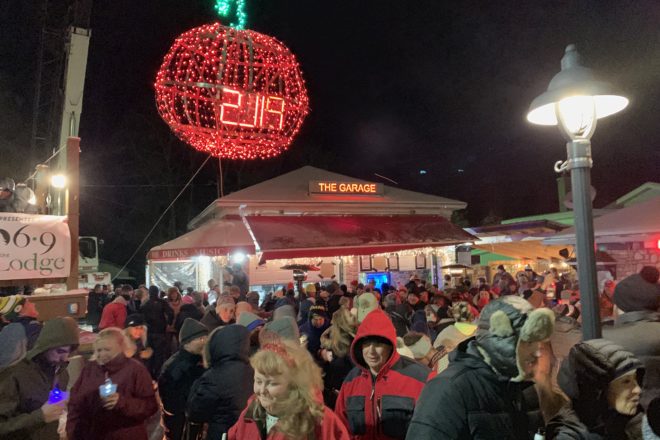 New Year’s Eve used to be a relatively simple affair in Door County. You hit the supper club, wolfed down a steak or a lobster tail fresh from the bay, then maybe counted down to midnight with some friends wearing silly hats at a bar.

If you were lucky, there might be a band playing. And you probably made some empty promises to meet some nutball at the beach in Jacksonport the next morning for the Polar Bear Plunge – the first of many unkept promises for the year ahead.

But the peninsula has upped its party game for the final night of the year.

The advent of the Cherry Drop in Sister Bay in 2017 gave the county a holiday centerpiece. The brainchild of Mike Mesic and Jaime Forest of FM 106.9 The Lodge radio station, the six-foot-wide, 300-pound cherry doesn’t do much but descend, but in the cold of late December, that’s enough to draw quite a crowd.

The cherry will hang from a crane at roughly 120 feet above The Garage at Husby’s before being lowered at midnight central time. Festivities and fires will start outside around 8 pm at Husby’s and the Sister Bay Bowl, with the crew from The Lodge onsite playing party tunes beginning at 10:30 pm.

And if it’s too cold out there for you, DJ Brawny will be taking over inside Husby’s, 11 pm – 3 am. (If you find yourself still dancing when he’s done, find a ride and go home!)

For those who aren’t into the whole midnight extravaganza, there’s still fun to be had. The Teresa K. Hilander Community Ice Rink, 2155 Autumn Court in Sister Bay, will be open for skating if the weather cooperates. Rent skates, hockey and broomball equipment, and warm up with hot beverages and snacks from the concession stand.

Then the village will set off fireworks at 8 pm. (Warn your dog-owner friends, lest they spend their New Year’s Eve engaging in a dog search party at midnight.)

Sister Bay Advancement Association will be running a free shuttle throughout the village throughout the evening. For a list of stops and a QR code to track the bus, click here>>

And don’t worry: There are plenty of good old-fashioned bar celebrations throughout the peninsula that are sure to be stocked with hats and noise-makers. Find parties and live-music details in the Happenings events calendar.