Door County’s crops and cattle are in far better shape than a lot of the drought-stricken Midwest, but they’re still feeling the heat.

As of July 22, the U.S. Department of Agriculture (USDA) had estimated that 43 percent of Wisconsin’s corn crop was in poor or very poor condition and listed 66 percent of the state’s pastures as being in the same dire straits. 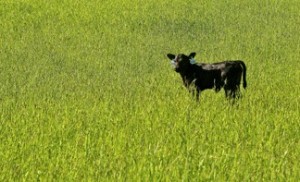 While Door County is fairing better than much of the state, animals are still being affected by this summer’s heat wave and drought. “We won’t see the growth factor we normally see,” says Waseda Farms owner Tom Lutsey. “The heat causes the cows’ bodies to slow down.” Photo by Len Villano.

In comparison, 31 percent of corn crops and 14 percent of pastures were listed as being in good or excellent condition. Those numbers mirror reports from states across the Corn Belt.

But in Door County, while some crops are stressed, moisture levels have not reached critical lows that are causing crops throughout the nation to simply die out.

“There are places in the southern part of the Midwest that have zero yield,” says Volenberg. “In Door County and northeastern Wisconsin, we’re pretty well off.”

While the recent rains came in time to help out some crops, like soybeans and alfalfa, any reductions in farmers’ corn yields are already set in stone. Volenberg says it’s too early to tell exactly what the reduction will be, but it definitely will not be as significant as in other parts of the nation.

“In my particular location, we’re not feeling the effects of the drought,” says Olson. “We’re doing as good or better than other years.”

The drought has caused agricultural commodity prices to hit record-highs, with a bushel of corn now selling for over $8 – an increase of about 50 percent in the last few months.

When asked if rising prices would mean increased profits, Olson was cautiously optimistic.

“There’s potential that we could do better, but you never really know until you harvest your grain what the bottom line is going to be,” he says.

Dennis Schopf of Schopf’s Hilltop Dairy says the heat has had minimal effect on his corn crops, but it’s had a greater impact on his dairy cattle.

“They’re just like people; they don’t eat as much if it’s hot out,” says Schopf. “Especially when it gets over 90 degrees.”

On average, each of Schopf’s cows produces about 85 pounds of milk each day. Because of the heat, some cows are coming in 10 pounds under their average.

Over at Waseda Farms, Tom Lutsey says he’s facing a similar problem with his beef cattle.

“We won’t see the growth factor we normally see,” says Lutsey. “The heat causes the cows’ bodies to slow down.”

While Lutsey expects he’ll have enough feed to make it through the winter, according to Volenberg, farmers in other parts of the nation may not be so lucky.

“You’ll see beef slaughters throughout the United States in the next few months,” says Volenberg. “Farmers will slaughter early because there’s nothing else they can do.”

As a result of early slaughters, says Volenberg, beef prices will initially dip before eventually skyrocketing when supply runs scarce.

And soon, most food prices will be on the rise.

“The drought will impact the impoverished because food prices are going to go up,” says Volenberg. “Producers will probably try to keep prices low for the next six months, but eventually they’re going to have to pass it on to the consumer.”