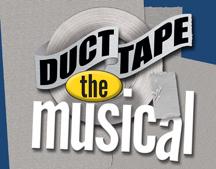 What do you get when you take Jim (Berg) and Tim (Nyberg), the Duct Tape Guys, and tape them together with Ben Larsen and Dan Mayhew (of Ben There, Dan That)? You get Duct Tape: The Musical – 90 minutes of breathtakingly stupid comedy for the entire family.

Since 1995 The Duct Tape Guys have performed their bizarre prop comedy (based on their best selling Duct Tape Book series) all over North America and in Europe. They’ve appeared on countless television and radio shows around the world.

When Third Avenue Playhouse asked The Duct Tape Guys to bring their show back, Jim and Tim had to think quick as to how to effectively stretch their usual 30-minute show to the requested 90 minutes. Ben and Dan, well known to Door County residents for their musical talents and endearing personalities, immediately came to mind as the perfect match for their goofball humor.

The guys have been busy blending their shows, writing new songs and comedy bits, and incorporating videos into the mix for the upcoming debut. And, the first 250 people through the door at the Sturgeon Bay premiere will receive free duct tape to boot (compliments of Duck® brand).

Duct Tape: The Musical premieres Saturday, May 15 at 7:30 pm. Tickets are on sale at the theater box office, 239 N. Third Avenue, Sturgeon Bay, 920.743.1760. The box office is open Monday through Friday, 10 am – 3 pm, and one hour prior to performances. Tickets are also available at Dancing Bear, 13 N. Third Avenue, Java on Jefferson, corner of Fifth & Jefferson and online at http://www.ThirdAvenuePlayhouse.com.